Homophobes accused me of abuse because I perform drag for children 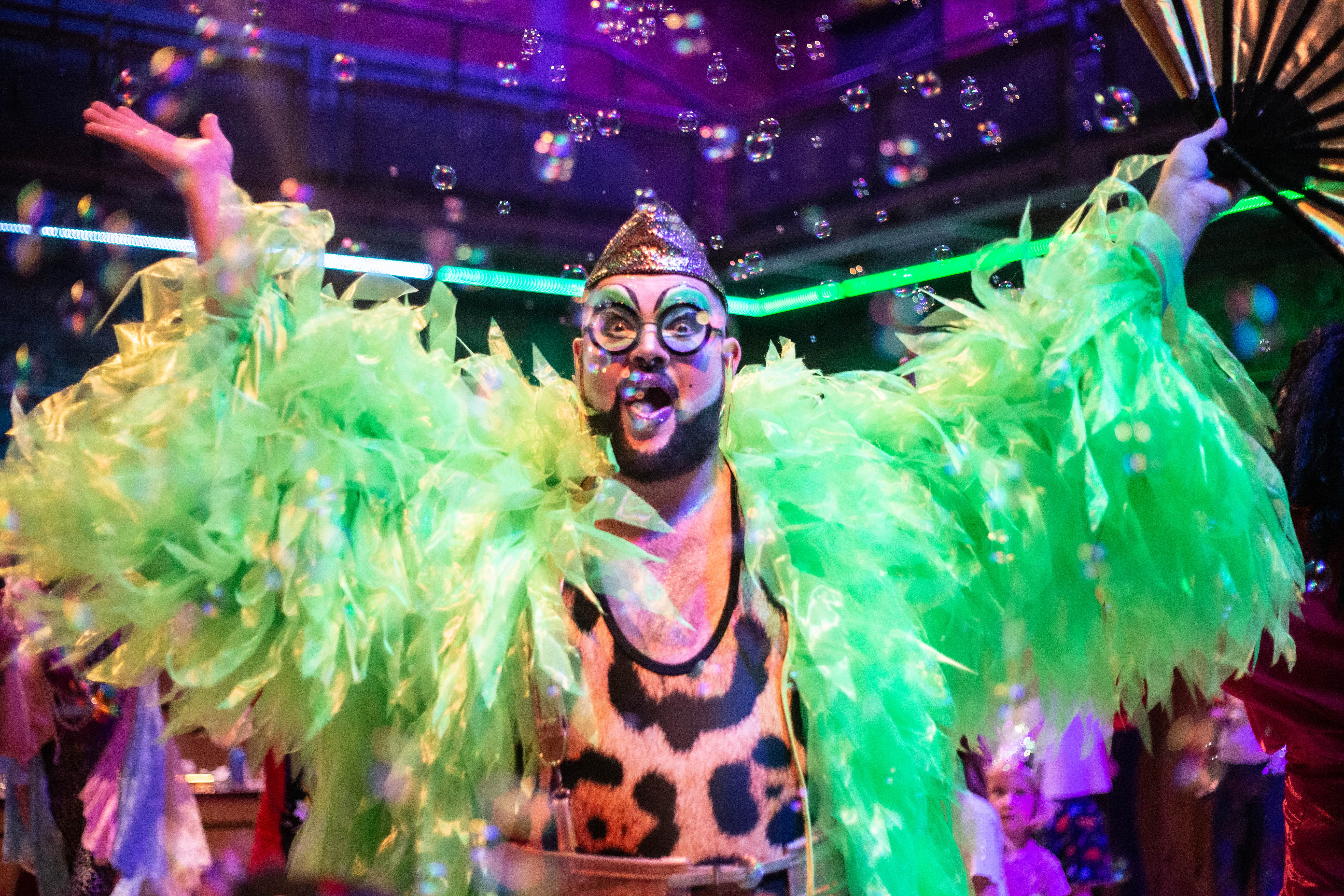 Last month, my world was turned upside down when I became the centre of an online social media storm.

I was wrongfully accused of grooming children, and, most harrowingly, labelled a ‘Jimmy Savile Tribute Act’ – claims that were completely unfounded.

My crime? Being queer and performing in drag for children.

What trolls claimed was ‘pushing a dangerous and obnoxious ideology’, in reality, I’d set up a development programme to support the creation of queer-positive performance work for children and families – the first of its kind.

These comments are examples of the oldest, most vicious and flawed tropes of homophobia and transphobia; that LGBTQ+ people are somehow predators and simply by existing, pose an inherent danger to young people.

But to be caught up in the middle of it was deeply painful, devastating and frightening in equal measure. As hurtful as this response was, it was a reminder of how desperately a queer festival for children and their families is needed. It’s what I needed as a child.

The first time I heard the word ‘gay,’ and understood it, I knew that’s what I was.

I wouldn’t have the tools or language to understand myself as a queer non-binary person until much later, but at seven years old ‘gay’ worked – though I knew that being ‘gay’ wasn’t a safe thing to be, especially in the playground.

Growing up in the 90s, my formative years were lived under the influence of Section 28, the deeply homophobic law introduced by Thatcher’s Conservative government in 1988 to stop councils and schools ‘promoting the teaching of the acceptability of homosexuality.’

Even after its repeal in 2003, the shadow of Section 28 maintained its insidious influence. I’d grown up in a small village never seeing another LGBTQ+ person (that I knew of), never seeing myself represented in the media, never seeing a role model. In short, I grew up in isolation, knowing I was different and feeling alone.

I couldn’t imagine a future because there was no blueprint to follow. The seeds of shame had been sewn from the moment I recognised my difference, incubated through loneliness and blooming into anxiety, anger, depression and feelings of low self-worth which, only in recent years, I have overcome.

I was furious that a generation of LGBTQ+ people grew up in shame and isolation, but rather than let that rage consume me, I’ve harnessed its energy into making theatre and performance.

So, in 2018, I created FANTABULOSA!, an interactive drag show for kids with a troupe of drag artists, which we performed nationally.

I wanted to create spaces for LGBTQ+ people to feel celebrated, empowered and joyful. The reception was incredible. Thousands danced in the streets in an explosion of colour and glitter.

Afterwards, parents would tell us how we’d allowed them to have conversations with their kids about being able to love who you want. An elderly audience member even said that she wished our show had been around 50 years ago so some of her friends would still be alive. It showed me just how necessary our work was.

As the cast and I shared these moments of celebration, we also grieved for the childhoods we didn’t get to live. We were making the show that we needed to see when younger and that we still needed to see as adults. We had to give ourselves permission, as queer artists, to make work for children and allow ourselves the space to do this when throughout our lives, starting back in the formative playgrounds of the Section 28 years, we’d been conditioned to feel that queer people shouldn’t be around children.

I created my drag persona aged 29, in 2020. Fatt Butcher was a way to understand myself better, to push against the restrictive rules telling me how I should behave, be the kind of representation I needed to see in the world and bring people together through joy.

This was the inspiration for me to make PALAVER! in 2020, after two years on the road with FANTABULOSA!. Created in partnership with Cambridge Junction, we commissioned five leading LGBTQ+ performance artists to create shows for three to eight-year-olds. The project culminated in October 2021 in the family-friendly PALAVER! Festival, a day-long celebration of LGBTQ+ inclusive performance.

Except, halfway through the project I suddenly became the centre of an online attack aiming to shut us down. Transphobic blogs painted the project as a ‘national scandal worthy of public enquiry’ and trolls took to social media to challenge my suitability to be around children.

Homophobic and transphobic comments ranged from thinly-veiled concerns about safeguarding (ignoring the robust safeguarding procedures already in place) to accusations of child-grooming and paedophilia. It was brutal to see the ease with which total strangers would happily compare me to a serial rapist and child abuser simply for existing authentically.

These are the realities of navigating the world as a queer person. We are presented exclusively through the lens of sexuality rather than living full and multifaceted lives. It was traumatising, I became afraid to spend time outside my home, paranoid that someone might recognise and attack me. It impacted my mental health, and I was thrown right back into the fear of my youth.

In reality, the UK still remains a dangerous place for LGBTQ+ people. It was reported in November 2020 that the Government had pulled funding from its anti-LGBT bullying programmes in schools; reform of the Gender Recognition Act has not gone forward; and government departments, Ofcom and the BBC have recently withdrawn from leading LGBTQ+ rights organisation Stonewall’s diversity scheme.

At the same time, incidents of homophobic and transphobic hate crimes have risen dramatically. Media outlets continue to stoke the fires of a moral panic demonising trans people, falsely painting them as a danger to women and children using the same language that targeted LGBTQ+ people during the AIDS crisis, through Section 28 and beyond.

This the relentless bile that spills out from unregulated online hate groups, and it is easy to feel like we are living through a second Section 28.

The vicious response I received shook me, but also strengthened my resolve – it was evidence that projects like PALAVER! are sorely needed.

Moreover, the backlash galvanised supportive local audiences. My inbox was flooded with messages from parents who loved the project and ensured that each event was buzzing and full of love. The project thrived. The more unfounded hate they threw at us, the stronger we became.

Through the festival, we were able to create the kind of future we wanted to live in, one of freedom and unbridled celebration. It was a space where children and families could come together, express themselves, and live in the reality of what a world free from judgement can be.

With Stonewall’s 2017 School Report showing that nearly half of LGBT+ pupils are bullied in Britain’s schools, and more than two in five trans young people have attempted to take their own life – with one in five lesbian, gay and bi students doing the same – we need positive queer representation for children more than ever. We need stories that share our joy, celebrate our rich and diverse lives, and make it possible for young people who may grow up to be LGBTQ+ to imagine their futures.

That’s what I am working towards, despite the hate – in fact, because of the hate. I want more for my community than to be defined by the way others have treated us. I want to centre our own happiness, our own empowerment and move towards joy. I want future generations of children to know that they can be whatever they want, and that they have the power within them to do it.

I won’t stop performing for children, or adults. I truly believe that a more generous, accepting, loving world where children are free to be themselves without fear or shame is possible – but only if we take active steps towards making it a reality.

In times of darkness, hatred and fear, it’s up to each and every one of us to step outside of our comfort zone, seek new ways of seeing the world, and make a change. If we do that, we can do anything.