How a mystery cruise companion changed the course of my work

I was about to sit down to dinner on the first night of my first cruise and was feeling nervous. What madness had made me think a cruise would be a good idea? Would I be bored by my companions and unable to escape them? Or perhaps seasickness would ruin the whole thing.

Distracted, I realised too late that I had been seated at the wrong table, far away from my friends. And that's where I met "Ketty". A single woman of senior years, she welcomed the group at her table, all strangers, with such charm and grace that somehow she managed to put us all at ease. 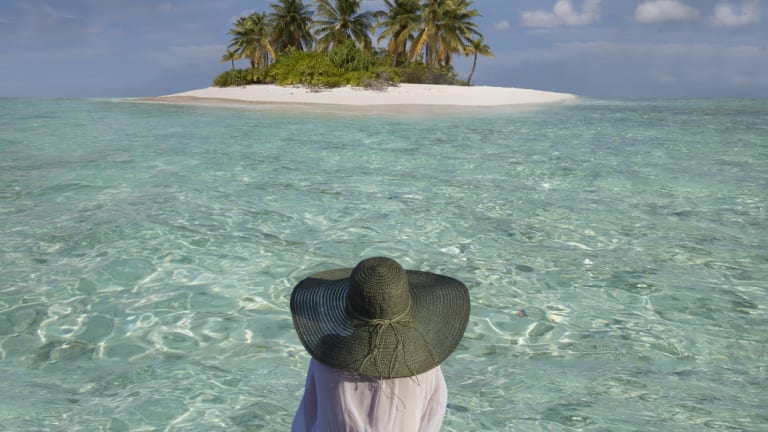 Cruises are rich pickings for authors and Ketty was not the only one to fall victim.Credit:Getty Images

The next night I joined my friends' table, so I didn't speak to Ketty again, yet something about her stayed with me.

Over the next 11 days I would catch glimpses of her: wrapped in a bright sarong reading by the pool; swimming in the pristine waters of Champagne Bay on Espiritu Santo, Vanuatu; sporting a huge floppy sun hat while listening to a local choir welcoming us ashore at Lifou Island, New Caledonia; tucked in the corner of a little South Pacific patisserie; dressed in a sparkling gown for a formal dinner. Endlessly stylish, always composed, she seemed to me the epitome of self-possession, swimming through the currents of the trip with the fluidity of the brightly coloured fish that flitted by in the aquamarine shallows of Vanuatu.

When I thought back over that first night's dinner and Ketty, I realised that, while the conversation had been lively around the table, Ketty had told us little about herself. My writer's sensibility was piqued. I began to create a story for her. She seemed to represent an elegant and accomplished example of an older woman, and I found my real-life dinner companion becoming the central character of my planned manuscript: the character around which all the others revolved. In my book, she became a clever, charming dressmaker, a sartorial fairy godmother with a gift for turning Cinderellas into princesses on a mission to transform the lives of those who join her at her dining table every evening.

Of course, cruises are rich pickings for authors and Ketty was not the only one to fall victim to my imagination. Leaning backwards in my chair I'd eavesdrop on conversations, trying to look nonchalant as I scribbled down dialogue in my notebook.

Strolling casually along the deck I would, nevertheless, be observing the older man I'd watched only the previous night seducing the merry widow who now accompanied him. I may have sounded gently polite, but my questions to the maitre d' about his life ashore masked an avid curiosity. No one was safe from my interest.

The cruise was over all too soon, and when I got home and the story began to flow, I realised there were elements I needed to know more about. More research was required, which led to another cruise. I had a string of questions and ideas to explore, but sadly there was no sign of Ketty.

Fact-finding became my priority. I decided the information desk was the best place to enquire about staff procedures. As we were 30 nautical miles from land in the Pacific Ocean, the officer may have looked a bit concerned when I asked if he could explain the steps to be followed if someone went missing on board! My explanation that I was a writer doing research, with a husband waiting safely at the bar, reassured him.

The book was finished by the time I took my next cruise but still I looked out for the elusive Ketty. The only things I know about her are that she lives in Brisbane, she's single and she's a regular cruiser. I wonder what she would think of the character I created from our brief meeting. I'll just have to keep cruising until I find her.

Table for Eight by Tricia Stringer (HQ) is on sale now.

This article appears in Sunday Life magazine within the Sun-Herald and the Sunday Age on sale November 4.