Hurricane Laura is the strongest storm to ever make landfall along the western Louisiana and northern Texas coast, bringing catastrophic storm surge, extreme winds and flash flooding as it hit as a Category 4 storm. But what determines how much devastation a hurricane produces, and what hazards cause the most damage, varies from storm to storm.

Although they only make up 25% of landfalling U.S. hurricanes, major hurricanes — Category 3, 4 and 5 storms — cause 85% of the damage. That’s because as hurricane winds increase, damage goes up exponentially.

Compare a Category 1 hurricane with winds of 75 mph and a storm like Laura, which had winds near 150 mph at landfall. Although the 150 mph wind speed is double, the damage potential is not just double — it is an astounding 256 times greater. And that just takes into account the wind; it does not consider the impacts of water damage, which is usually even more of a worry.

While the increase in winds is partly responsible for greater damage, the rising waters of the storm surge tend to be much more damaging and deadly in most hurricanes.

Erik Salna is associate director for education and outreach at the International Hurricane Research Center at Florida International University. As part of his job, he helps run the “Wall of Wind” which tests structures against hurricane-force winds to find weak spots and help improve the resiliency and design of structures.

In “a major landfalling hurricane like Laura in the Gulf, storm surge can be a very large and life-threatening hazard. The physical power of water washing up against structures at the beach can be very damaging. A cubic yard of water weighs about 1,700 pounds,” Salna explains.

Storm surge will likely be the most damaging hazard when Laura makes landfall — even more than the potential 150 mph winds. The National Hurricane Center is forecasting “unsurvivable” storm surge to 20 feet high — with the water reaching 30 miles inland.

Unsurvivable storm surge with large and destructive waves will cause catastrophic damage from Sea Rim State Park, Texas, to Intracoastal City, Louisiana, including Calcasieu and Sabine Lakes. This surge could penetrate up to 30 miles inland from the immediate coastline. #Laura pic.twitter.com/bV4jzT3Chd

Most often water is not only more damaging but also more deadly than wind in hurricanes. From 1963 to 2012, 75% of hurricane deaths were caused by storm surge and rain flooding. Most of that is due to storm surge. Yet in the case of Hurricane Harvey, which hit the Gulf Coast of Texas in 2017, it was biblical rains of 50+ inches that dwarfed all other hazards.

Laura will be the strongest system to hit the area from Port Arthur, Texas, to Cameron, Louisiana, since Hurricane Rita in 2005. Rita produced up to 15 feet of storm surge and had Category 3 winds of 115 mph. Laura blasted ashore with nearly 150 mph winds and 20 feet of surge. 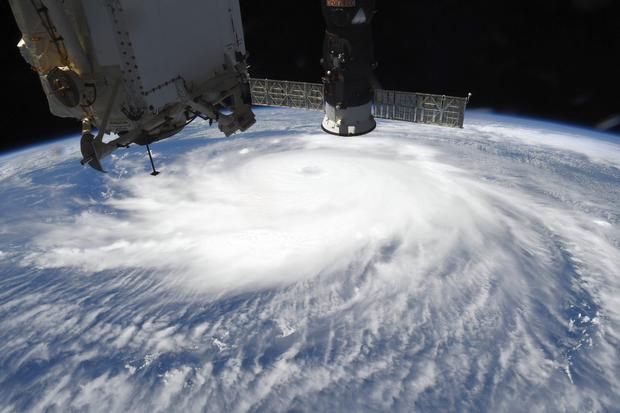 Judging strictly by the numbers, Laura is likely to be a more damaging storm. But no two storms are exactly alike. For instance, Rita was a larger storm and it was a Category 5 when it was over the Gulf of Mexico. That Category 5-like bulge of surge produced by Rita over the Gulf allowed the storm’s high dome of storm surge to be more robust than your typical Category 3 when it reached the coast. Plus, larger storms tend to generate more surge because they pool water from a larger area.

Laura has one very big advantage over Rita, and not in a good way. Not only is Laura likely to be a much stronger storm at landfall, it will most likely also be a strengthening storm at landfall. Any storm-chaser will tell you, storms that are still strengthening cause much more damage than stable or weakening storms of the same magnitude, partly due to the upward momentum of their intensification.

“When hurricanes are intensifying, the damage is much more pronounced,” says Mark Sudduth, a longtime hurricane chaser who has been in the core of many hurricanes. “Because of convective processes — thunderstorms — in the core, you get torrential rain which pulls down intense downdrafts. This downward moving air is much more violent than in weakening storms because strong thunderstorms are much more efficient at bringing winds down to the surface.”

In recent years, the Atlantic basin has seen an unusual number of Category 4 and 5 systems. Scientists have found that this is partly due to warmer ocean temperatures, not just in the Atlantic but all over the world. Since 1900, tropical Atlantic Ocean temperatures have warmed by 1-2 degrees Fahrenheit. Each year, ocean heat content hits new records due to the warming influence from the buildup of heat-trapping greenhouse gases.

As a result of this extra heat, a 2013 study found a “substantial and observable” increase in the proportion of Category 4 and 5 storms since 1975 — about a 25% to 30% increase per 1 degree Celsius (1.8 degrees Fahrenheit) of global warming. This spring, NOAA released a study, led by longtime hurricane researcher Jim Kossin, showing that the chance of a hurricane strengthening to major hurricane status has increased 8% per decade — 30% over the past 40 years.

Over the past decade, the climate science community has reached some consensus about the future of hurricanes on a hotter Earth. While it is not clear if the average number of hurricanes will change, it is becoming clear that hurricanes will continue to get stronger, with more and more storms reaching into the most damaging part of the intensity spectrum, Category 4 and 5. That means storms will continue to become more damaging.

But a warmer climate is only one reason why hurricanes will cause more damage. According to Stephen Strader, the geography program director at Villanova University, increased exposure for people and property along the coasts is likely an even bigger consideration. “In fact, disaster frequency and magnitude is more often driven by societal factors rather than the hazards (e.g., hurricanes) themselves,” says Strader.

Strader and his colleagues coined the term the Expanding Bull’s Eye Effect to describe this trend. He explains, “It is not solely the population magnitude that is important in creating disaster potential, it is how the population and built environment are distributed across the landscape that defines how the fundamental components of risk and vulnerability are realized in a disaster.”

The idea is illustrated below in this visual by co-creator of the concept, Professor Walker Ashley from Northern Illinois University. Over the years the bulls-eye representing the built environment of a community keeps expanding, indicating more people and wealth in harm’s way.

This is especially meaningful when a major hurricane makes landfall over a densely populated U.S. city. Laura is on track to mostly miss the Houston-Galveston area, to the relief of millions of people in one of the largest metropolitan areas in the nation. But, as is made clear in the visuals below, which Strader graciously built for CBS News, the area near landfall — cities like Beaumont-Port Arthur,  Cameron and Lake Charles, Louisiana — are expanding as well.

In the visuals, Laura’s forecast cone is overlaid on top of the built environment in 1980 and now in 2020 to illustrate the increase in development and the exposed risk.

Further complicating the evacuations and emergency response is COVID-19, which is widespread in both Texas and Louisiana. The darker the shaded counties below, the higher the density of COVID-19 cases. 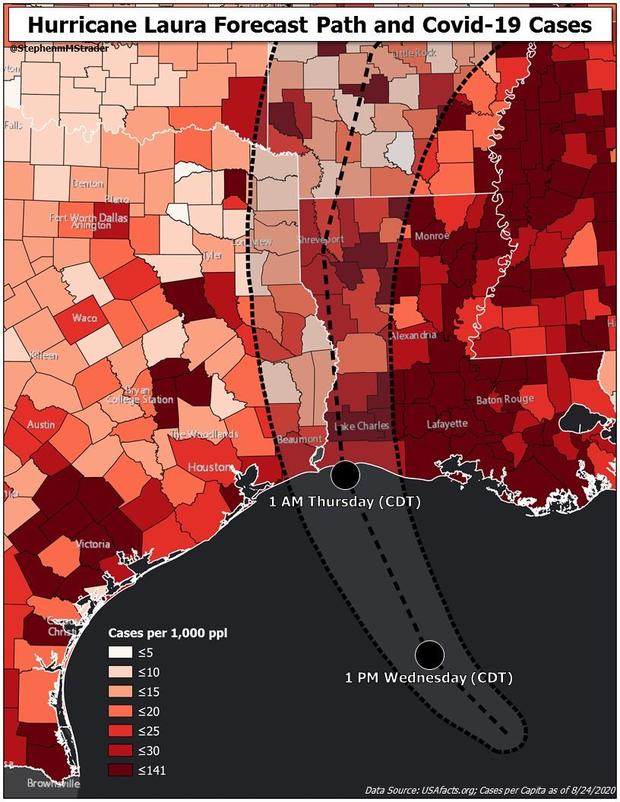 As population continues to increase, more property is built in harm’s way, and extreme weather gets even more severe due to climate change, Strader says to expect complications and losses to escalate.

“Overall, climate factors and societal factors are two sides to the same disaster coin. Both play a role in creating losses. Their individual and combined influence has to be considered in each hazard event.”