Identity politics? Drums of war? Quick, look over there – hobgoblins!

There is always a skulking reason why political leaders seek to turn everything on its head, frighten the horses and bellow that dreadfulness stalks the night and must be stared down by the forces of light, which is to say, those in power.

Scott Morrison and his currently loyal sidekicks, you may have noticed, are ladling out all these techniques with furious enthusiasm. 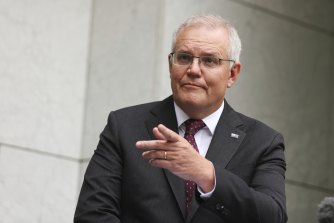 Scott Morrison has chosen the oldest standby in the book of political opportunism: persuade the electorate to … hey, look over there! Credit:Alex Ellinghausen

Treasurer Josh Frydenberg, a couple of weeks out from a national budget to be delivered within a deficit big enough to swallow a continent, is trying to turn the debt on its head by shouting that the new priority is, hallelujah, an unemployment rate below 5 per cent.

Peter Dutton, having barely warmed the seat as Defence Minister, warns of a possible war with China on the very day (ahem, Anzac Day, as it happened) his national security minion, Mike Pezzullo, offers his concern that “free nations again hear the beating drums and watch worryingly the militarisation of issues that we had, until recent years, thought unlikely to be catalysts for war”.

Trying to turn the narrative on its head? Frightening the horses? Tick and tick.

And now, Morrison himself, Prime Minister of Australia, having alerted his Christian brothers and sisters last weekend that the “evil one” was at work on social media, is calling for a reckoning with those captured by “identity politics”.

Morrison, you understand, knows a bit about the subject.

He travels with his own photographer to market a new identity for himself every day.

There’s the beer-swilling rugby league supporter; the countrified bloke in moleskins and chambray shirt surveying drought-struck paddocks and flood-ravaged towns; the curry-cooking dad who builds a chook pen for the kids; the emotional PM welling up and promising to address the treatment of women in politics …

Why, his scramble to the prime ministership began when he sought to identify himself as loyal to the then prime minister, Malcolm Turnbull.

For the cameras, he threw his arm about Turnbull’s shoulders – a laying on of hands, you might say – and declared “This is my leader and I’m ambitious for him!” Two days later, he redefined ambition itself: Morrison’s new identity was Prime Minister.

If you believe his concerns now are really about the devil and that malleable buzz-phrase of the spiritually alarmed, identity politics, you haven’t been taking notice.

The Morrison government is in serious pain for more temporal reasons.

The rollout of COVID vaccines – and by “rollout” we are being generous beyond measure – has been such a fiasco it has had to abandon all plans for a federal election this year.

The near eradication of the coronavirus in Australia was supposed to lead to a celebratory period ideal for a rush to the polls, if not dancing in the streets.

But Morrison had only to look across the Pacific to see what happened to Donald Trump – something that has clearly been of interest to him for some years – to understand that when COVID and mismanagement steal all the headlines, the mightiest end up cooked.

And so, he has chosen the oldest standby in the book of political opportunism: persuade the electorate to … hey, look over there! Quick!

Former prime minister Paul Keating called it “throwing the switch to vaudeville”. John Howard perfected it by urging the nation to “be alert, but not alarmed”, by which he meant “quake in your boots”.

The American writer H.L Mencken, a born cynic – which is to say, a fellow who knew the score – defined the technique way back in 1918.

“The whole aim of practical politics is to keep the populace alarmed (and hence clamorous to be led to safety) by an endless series of hobgoblins, most of them imaginary.”

Identity politics? The drums of war?

Hey, look over there, quick! Hobgoblins!