Pretty in pink? You better Belize it.

Kate Middleton brought out her first evening ensemble of the Cambridges’ Caribbean tour Monday night at a reception in Belize, and packed a punch in the bold color.

The royal, 40, wowed in a vibrant metallic pink gown by celeb-loved brand The Vampire’s Wife at an event honoring the Queen’s Platinum Jubilee.

While she seemed to be slightly overdressed for the outdoor event — especially compared to a tie-less Prince William — Middleton appeared in high spirits as she greeted guests at the reception, hosted by Belize’s Governor-General, Froyla Tzalam. 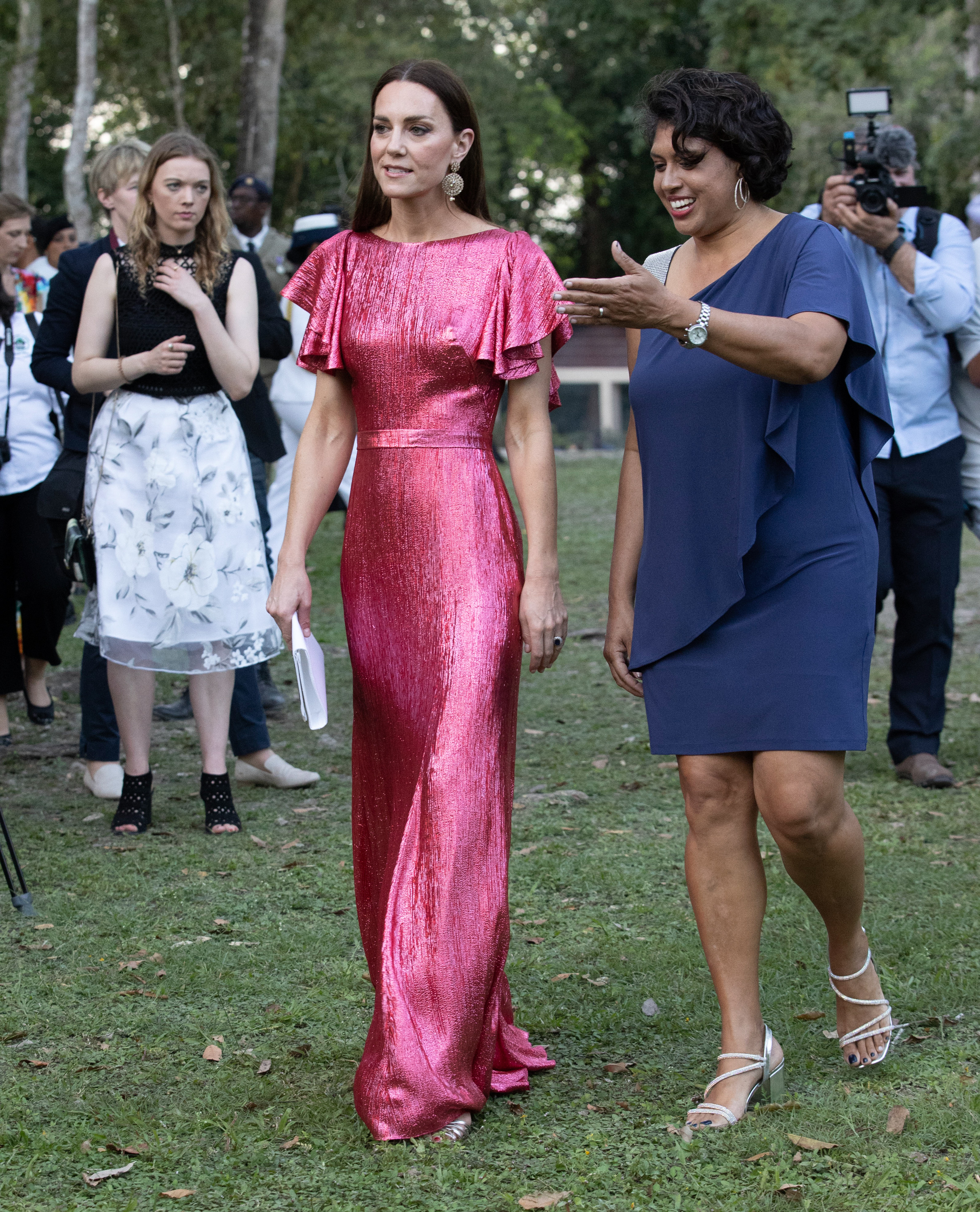 The flutter-sleeved dress, which looks to be a custom version of the brand’s “Light Sleeper” design ($2,310), stood out amongst the ancient Mayan ruins at Cahal Pech where the event was being held.

Pairing the gown with a repeat pair of Jimmy Choo “Mimi” sandals and the custom O’Nitaa earrings she wore on a tour of Pakistan in 2019, the Duchess also added a thoughtful touch to her accessories: a white clutch featuring an embroidered Mayan design on it. 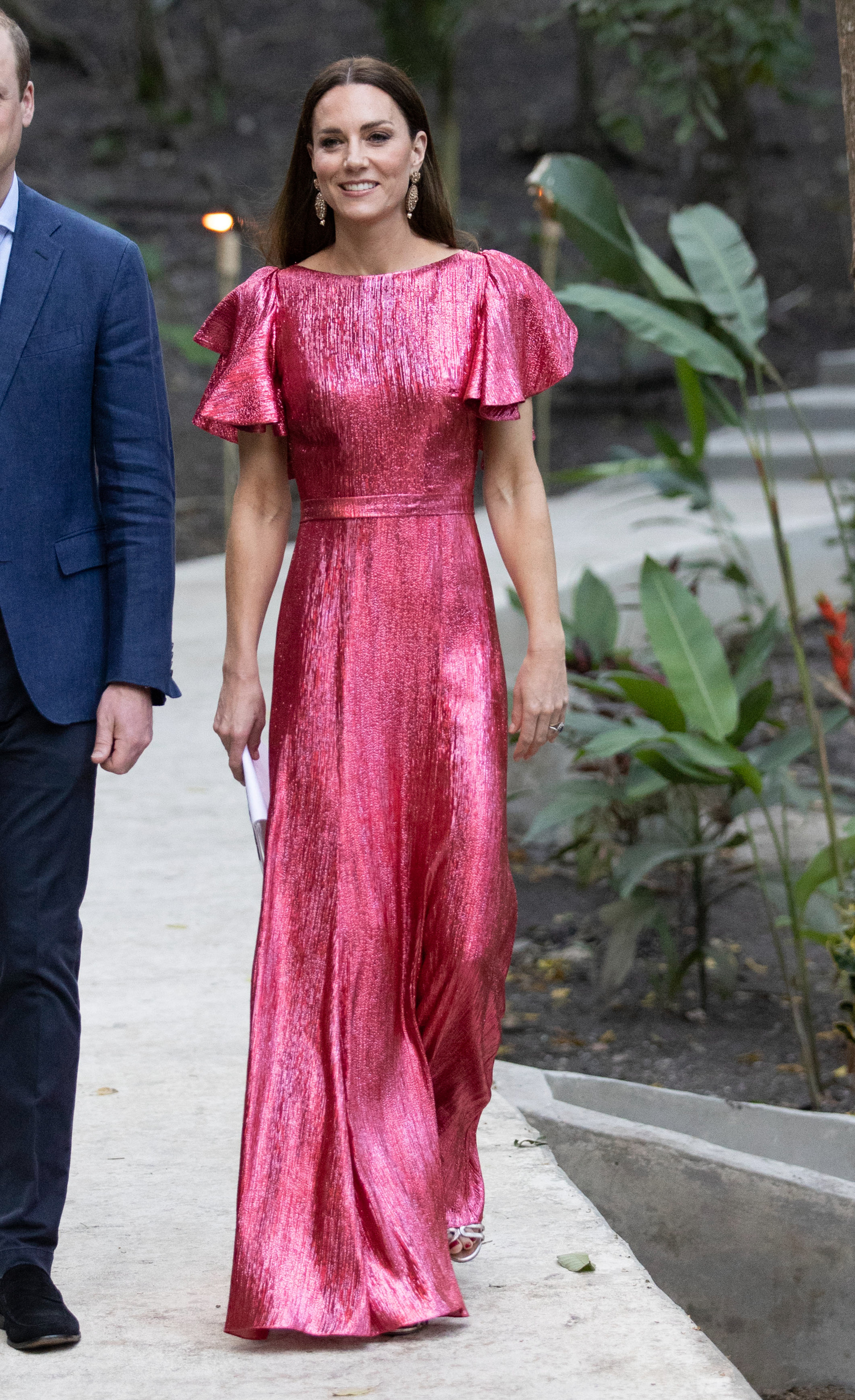 This is the second time Middleton has chosen The Vampire’s Wife, a British brand popular with stars like Sienna Miller, Cate Blanchett, Dakota Johnson and Prince William’s cousin, Princess Beatrice. 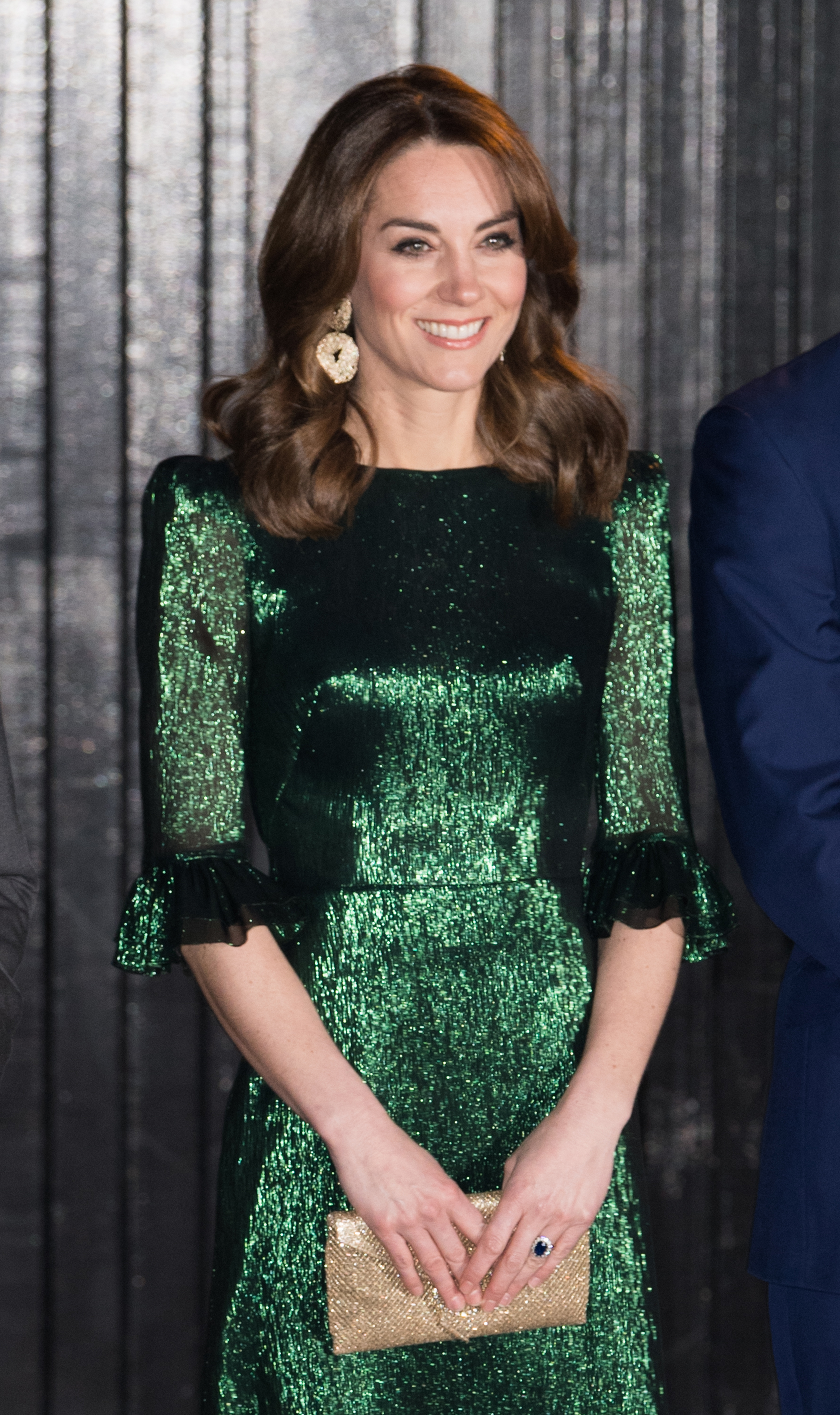 In March 2020, the Duchess sported an emerald green cocktail dress made from the same shimmering fabric by the brand while visiting the Emerald Isle.

As for Belize, the glittering gown proved quite a change from Middleton’s earlier attire of the day when she joined Prince William, 39, in coordinating olive green outfits for some outdoor activities. 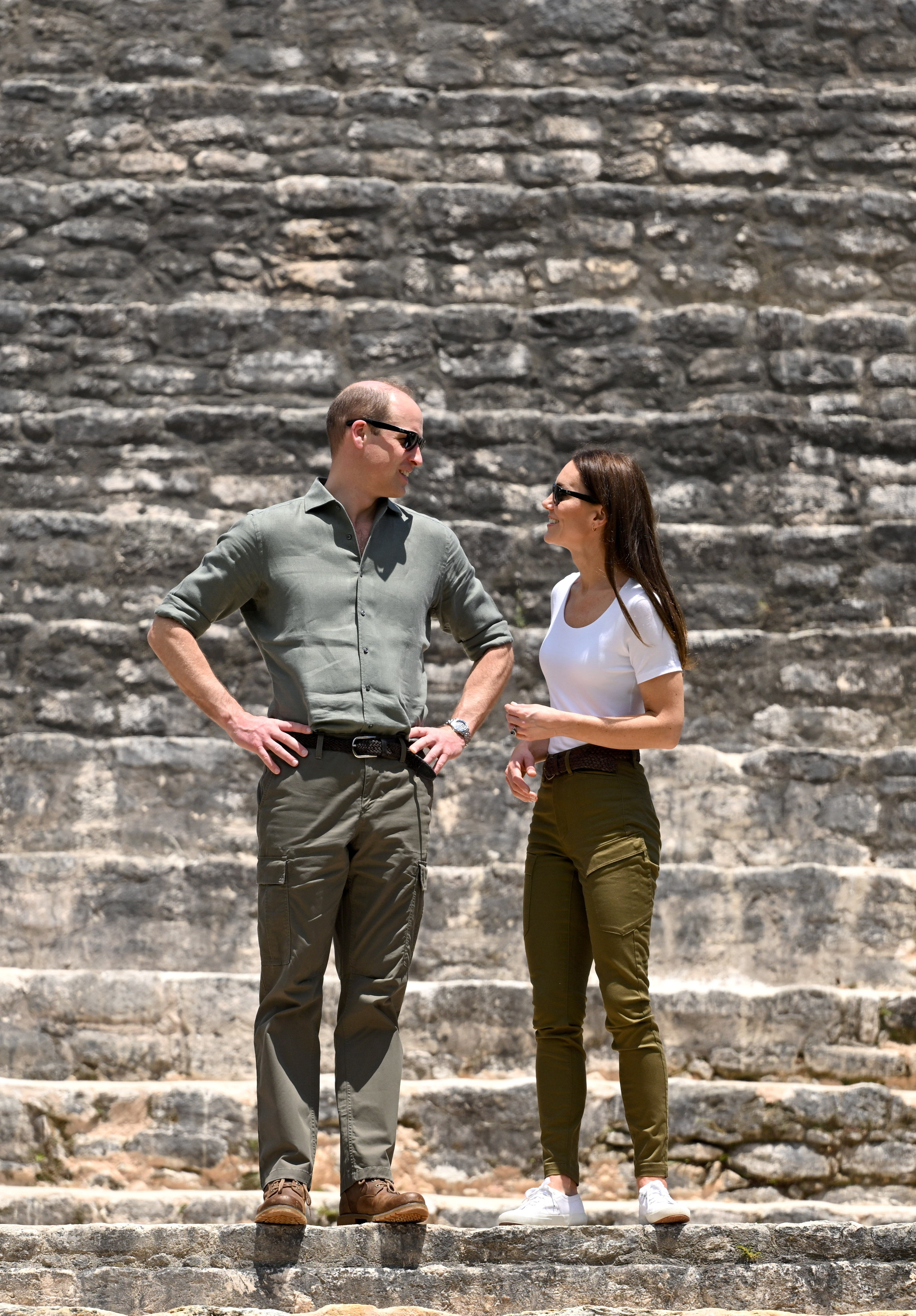 Sporting a simple white tee by John Lewis, green G Star Raw cargo pants ($120) and her beloved Superga trainers ($49), the Duchess exclaimed “wow” when she reached the top of a 3,000-year old Mayan palace located at the Caracol archaeological site.

Later in the day, Middleton added a sold-out khaki safari shirt by Scotch and Soda on top of the tee and swapped her Supergas for sturdy hiking boots by Palladium ($106) to visit the British Army Training Support Unit at Belize’s Chiquibul Forest Reserve.

Today the royal couple sets off to Jamaica, and we’re excited for some more beachy glam to come. 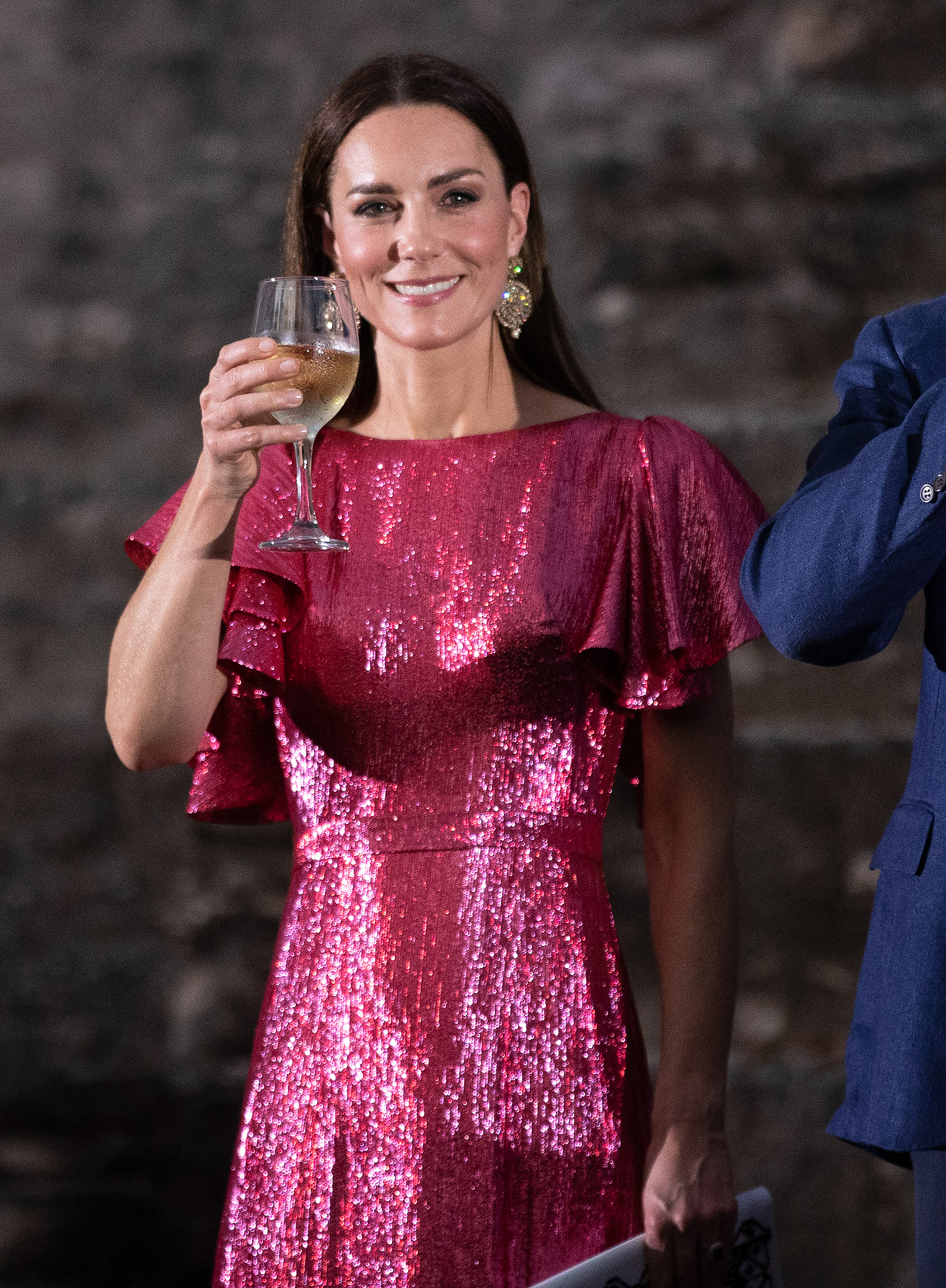