Meet the family having an eco-friendly Christmas 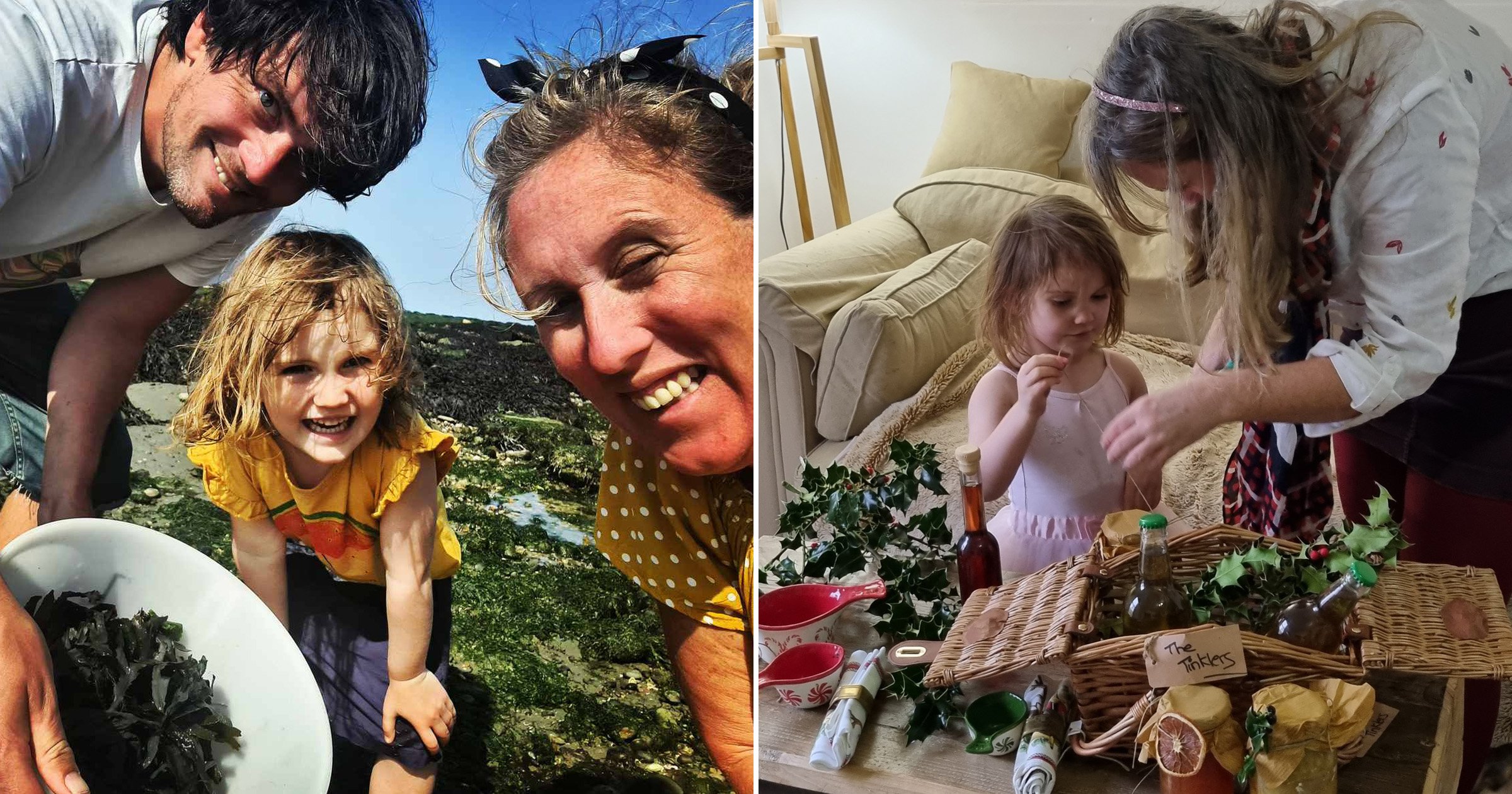 We’re increasingly becoming more eco-conscious as a society as time goes by and concerns about the environment increase.

One family in Whitstable, Kent, have been making eco-friendly Christmas a tradition in their household since 2017, though they’ve always kept environmental considerations in mind.

Imogen Tinkler, 39, lives with her husband Duncan, 39, along with their children Xanthe, 4, and Athene, 6 weeks old, and their rescue dog Spartacus.

‘Being eco-friendly has always been part of our Christmas but it really started to be more so when we had our first Christmas as a family,’ Imogen tells Metro.co.uk.

‘Having a child is definitely a trigger to decide how you shape your own Christmas, the traditions you want to make and how you decide what is important to you.

‘Several things led us to that – like the amount of waste and overindulgence there is at Christmas.

‘It feels ridiculous at a time of celebration to be creating so much waste. Every year there seems to be more and more and I didn’t want Christmas to be just about stuff for my children.

‘Part of the excitement is the preparation and creating things throughout the year for a big winter feast. It isn’t about instant gratification and it is important to be mindful of the world we live in.

‘Having an eco-friendly Christmas makes you more mindful and I think it makes things more special.’

She believes that as the years have gone on, society has become more wasteful and that decades ago rural town life was generally more eco-conscious.

Imogen continues: ‘3.3 million penguins worth of plastic is wasted at Christmas. It blows my mind. We didn’t want to add to this as a family as I believe it’s detrimental to the magic of Christmas and the environment we live in.

‘Christmas is such an important time of year but the magic really is in spending time with family and being inspired by the natural world.’

Imogen grew up with these ideas in mind, as her mother would make her own wreaths, and they would forage for holly, as well as make their own decorations.

Continuing this, while adopting other good habits, is about ‘the environmental standpoint but also to honour traditions’.

‘I want my two daughters to appreciate where things come from and the love and care that goes into making things,’ she adds.

‘To be aware of how far things have travelled and what goes into growing things. It makes me really sad to see overindulgence without any thought. We are really mindful as a family of our waste.’

One way they work to prevent waste and environmental damage is through foraging.

Food is a big part of the family’s lives, as they run Bangers and Balls, a seasonal food brand running supper clubs and online community teaching.

Food is also a big part of Christmas.

‘We forage locally in Whitstable everywhere we go – from when we walk the dog to the nursery run to going to the beach. Once you know what to look for there is so much to find. It is like going on a treasure hunt every single day,’ Imogen says.

‘In the UK we are so lucky there’s an abundance of produce once you know what to look for. We used to live next to one of the best places to forage in London – Burgess Park. So it isn’t just for country dwellers – you can find it in the city too.

‘We look for so many different things from fresh new nettles to make nettle pesto, nettle and ginger beer and even nettle dough balls, to elderflower to make champagne and chutneys.

‘As well as the traditional English Hedgerow which is dotted with crimson rosehips, juicy blackberries, sloes, hawthorn, damsons, there are also more unusual finds like junipers and quinces.

‘We love the Hedgerow so much that we have written a children’s book series based on it.’

Other things the family have foraged include wild garlic which appears in the spring. They preserve it throughout the year and some will end up on the Christmas table. Seaweed is another common find.

‘Duncan uses it in everything from gravy to ice cream. It provides the most amazing Umami flavour and will be in our Christmas gravy.

‘We even make our own salt by collecting it from the sea. It really is amazing what abundance there is in the world around us.’

In addition to foraging, the family grow crops that will make their way onto the Christmas table.

They grow kale, tomatoes, gooseberries, kiwi, strawberries and blackcurrants. There are herbs too, and Imogen will make preserves with her husband.

Using some of the herbs they grow, they’ll make oils and vinegars, such as mint and rosemary.

‘We only have a postage stamp of a garden,’ Imogen tells us. ‘It’s amazing what you can do in a small space. I honestly believe we are the only people to leave London and end up with a smaller garden.

‘We make so many things from sloe gin to our cranberry hot sauce to the Christmas pudding,’ she adds.

But they can’t grow everything. Items such as turkey and beef come from a local butcher to factor in air miles.

‘We have fish on Christmas Eve and we buy that from somewhere it’s all locally fished or farmed.’

The eco-friendly attitude extends to gifts too, which are usually secondhand and bought through charity shops.

Imogen says: ‘I love rummaging through a charity shop and seeing what I can find.

‘One of my favourite ever Christmas finds is a 1980s pop up The Night Before Christmas Book. It is completely intact and was only £1.

‘I also use Facebook Marketplace. It feels great to buy things there and know you are also helping someone else out, as often people need the money from this or it’s going in their child’s piggy bank.

‘I have bought Xanthe’s bike on there which is stunning and looks brand new – much better than old things going to landfill.

‘The person I bought it from was delighted too as the money was going towards a bigger bike for her daughter.  It makes me feel part of a community.’

Duncan was a little ‘anxious’ at first about buying gifts in this way for their children – but he’s since come around.

‘He didn’t want them to feel like they had to have things that were second best,’ Imogen explains.

‘Now he doesn’t worry as he can see they can’t tell the difference and love it.’

Homemade food items will also be used as gifts for friends and family.

‘The rest of our family love their presents and the wonderful food, so they think it is brilliant,’ says Imogen.

‘This isn’t about going without, but being mindful of what you have and making memories that last a lifetime.’