Meet the man who flew 5,000 miles for a first date

Love is in the air! Man, 32, flies 5,000 miles from Scotland to Chicago for ‘absolutely crazy’ first date with woman he matched with on Tinder

A man looking for love took to TikTok to reveal how his quest for romance led to an epic 5,000-mile journey to America to meet a date for the first time.

Patrick Campbell, 32, who is Scottish, posted a clip to his account @paddycampbell685 explaining that he had set up a Tinder account after ending his relationship with his ex-partner earlier this year.

Meeting Bridget Kelly, who is American, on the dating app, sparks flew and he decided to make the journey to meet her after she invited him to a wedding.

Patrick said of the unlikely dating story: ‘Back in January of 2022 after Covid, I fell out with my partner at that time – long story into that one – but I moved on after that and joined Tinder which is one thing I have never used before and I have never had Snapchat in my life at 32 years old.

‘So I joined Tinder a couple of months later after using the app. I got a message from somebody I thought was very bonny, very pretty.

He continued: ‘I swear it looked like she was from Edinburgh, which really confused me but she isn’t. Turned out she was from America – 4,700 miles away in Wisconsin in a place called New Glarus.’

Patrick went on to explain that the new love match got talking and Facetimed frequently, realising they had a lot in common and got on very well.

Bridget invited Patrick to America for a wedding after a few months of chatting with him.

Panning the camera to his suitcase, Patrick revealed that he had taken up the offer and would be flying to see her, starting his journey from Glasgow on May 16 and then going to Dublin.

He would then eventually fly onwards to Chicago and reach Bridget’s hometown. 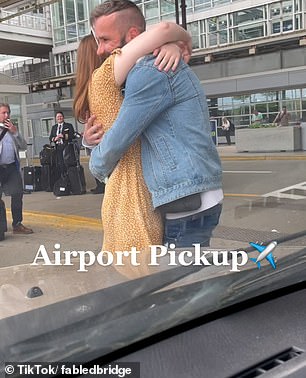 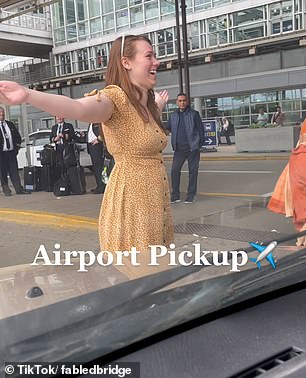 Patrick Campbell, 32, from Scotland, revealed he would be flying to Chicago to meet Tinder match Bridget Kelly for their first date, pictured left and right

Patrick admitted he was a bit nervous as he had never been to America before and was not sure ‘how these Yanks are going to act.’

He then quipped that he was not sure what their reaction would be to meeting him as he works in the whisky sector.

Rounding off his video he said: ‘It’s f*****g insane. Its absolutely crazy that this is happening but yeah.’

Bridget then shared the moment that the pair met at the airport for the first time and embraced on her own TikTok account fabledbridge. 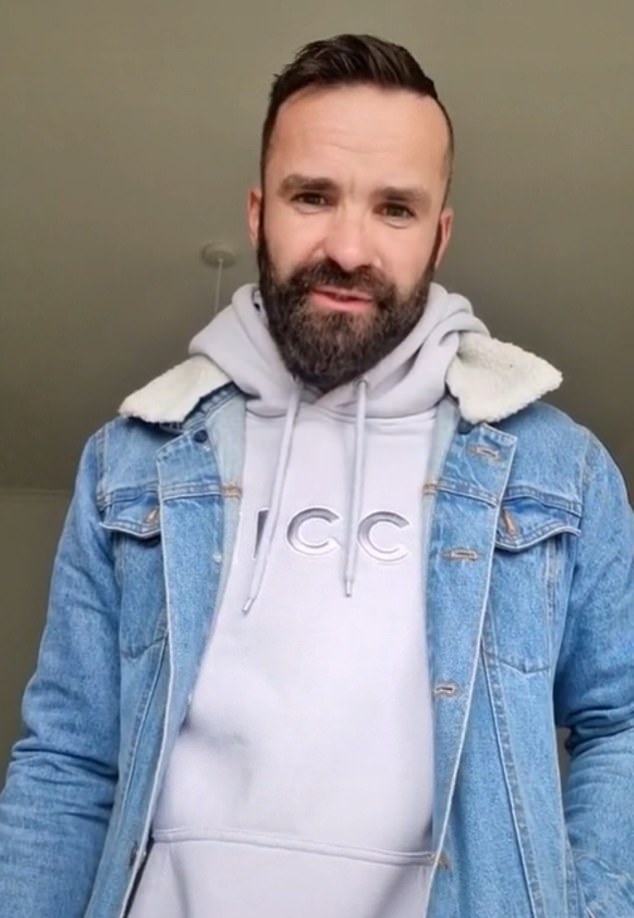 Patrick, pictured, admitted he was a bit nervous as he had never been to America before and was not sure ‘how these Yanks are going to act’ 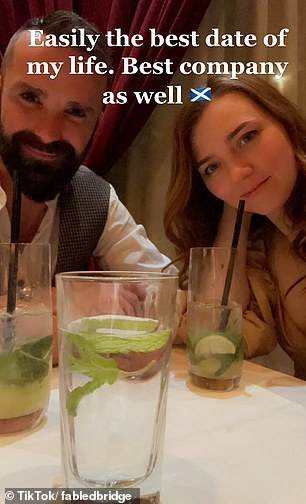 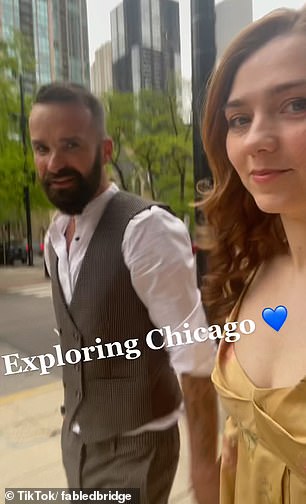 Bridget, pictured left and right with Patrick in Chicago, then shared a compilation of the happy couple exploring together on her TikTok

Opening her arms to hug him, both smiled from ear to ear as they greeted each other.

Bridget then shared a compilation of the happy couple exploring Chicago together.

She captioned the clips: ‘easily the best date I have ever been on’ as the duo were seen laughing hand in hand as they walked through the city.

The new couple met after Bridget used the feature Tinder Passport as she had wanted to meet a Scottish man such as Patrick.

With Tinder Passport you can search by city or drop a pin on the map and begin Liking, matching and chatting others in the destination of your choice.

Commenters on both Bridget and Patrick’s TikTok were supportive and positive about their romantic adventures.

One user wrote under Bridget’s footage:  ‘Inquiring minds want to know… how does one get a Scottish beau? The American ones are children.’

Another person added: ‘Handsome, dresses well, killer tatts, Scottish accent and travelled halfway across the world to see you. Winner 10/10.’

And others wrote under Patrick’s clip: ‘be safe’ and ‘Class lad. All the best.’

Meanwhile, another said: ‘New Glarus! No wonder you two just showed up on my FYP. Bless you both.’

And a separate person wrote: ‘Loving this paddy! Go you.’

Commenters on both Bridget and Patrick’s TikTok were supportive and positive about their romantic adventures, pictured