The largest profits ever made by the nation’s mining sector may help Australia narrowly avoid another recession as lockdowns aimed at stopping the spread of COVID-19 continue to plague the economy.

Ahead of Wednesday’s June-quarter national accounts, Australian Bureau of Statistics data revealed mining gross operating profits reached $55 billion, or almost $600 million a day in the June quarter. Profits were up 18.4 per cent on the first three months of the year and 43.4 per cent over the year. 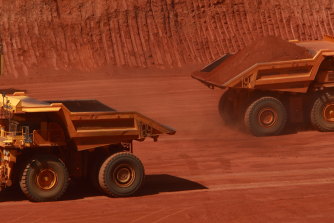 Much of the increase in mining profits was driven by iron ore prices, which climbed well above $US200 a tonne earlier this year.Credit:Louie Douvis

Some economists believe the June quarter could show the economy contracting. A negative result is also expected in the almost completed September quarter, which would put the country into recession. But the strong national income results driven by profits allayed some fears of a negative June quarter.

Much of the increase in mining profits was driven by iron ore prices, which climbed well above $US200 a tonne earlier this year, as sales lifted by 29 per cent through the year.

It was a different story for the accommodation and food service sector, which suffered a 56.2 per cent drop in profits. Arts and recreation businesses were hit by a 45.9 per cent fall while retail trade profits slipped by 24 per cent.

Profits for most of these sectors had been artificially increased by the federal government’s JobKeeper wage subsidy program last year.

While overall profits will boost national income, the same ABS figures revealed inventories increased just 0.2 per cent through the same quarter, compared with 2.4 per cent in the March quarter. Inventories are now back to where they were in 2016.

The drop in inventories will cut about 0.7 percentage points from the June-quarter GDP result.

UBS senior economist George Tharenou said it was increasingly difficult to determine how the economy performed through the June quarter, given the big lift in company profits and the run-down in inventories.

He cut his June forecast to 0.4 per cent from 0.7 per cent, saying “it could be anything really”.

Commonwealth Bank senior economist Kristina Clifton said the June quarter was looking “soft”, adding net exports would probably detract from growth. CBA is forecasting a June GDP result of 0.4 per cent, followed by a 4.4 per cent contraction in the September quarter.

Westpac senior economist Andrew Hanlan said the overall result could hinge on government subsidies and how they moved between businesses and individuals.

He expects the national accounts to show the economy growing 0.5 per cent in the June quarter.