Morrison considering options to give pensioners a bump in September

Prime Minister Scott Morrison is considering topping up age pensions as older Australians call for a third stimulus cheque after the Department of Social Services confirmed their payments won't increase automatically in September.

Age pensions and most other indexed welfare payments usually rise every six months in line with changes to cost of living or average wages, but those measures have gone backwards over the pandemic. Consumer prices fell by 1.9 per cent in the June quarter, taking annual inflation to minus 0.3 per cent, and pensioner living costs dropped 0.6 per cent over the six months to June. 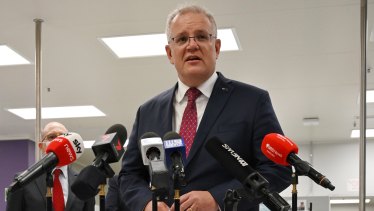 Prime Minister Scott Morrison is examining options to top up the age pension, which won’t receive an automatic indexation rise in September.Credit:Nick Moir

Council on the Ageing chief executive Ian Yates accepts there will be no regular indexation increase in September, but he says the objective indices don't tell the whole story of these extreme times.

He cited travel costs going up since "it's not desirable that older people travel on public transport" and the added cost of delivery of goods.

Pensioners received $750 stimulus payments in April and June as part of the government's coronavirus support package, and Mr Yates has written to Social Services Minister Anne Ruston asking for a third.

"While the two previous $750 payments have been very welcome, pensioners have ended up with less than people on the increased level of JobSeeker," Mr Yates wrote in the letter seen by the Sydney Morning Herald and The Age.

Mr Morrison said he and Treasurer Josh Frydenberg were discussing options to deal with the unexpected issue.

"You don't expect those indices to go negative and as a result budgets and others haven't been prepared on the basis of them going negative," the Prime Minister said.

"It was not intended and nor will it be the case that you'll see those payments reduce."

The single age pension increased by $10.90 a fortnight in March. Its next automatic indexation isn't until March 2021.

"It is unreasonable to say, well they've had the two $750 therefore they shouldn't be saying anything."

Combined Pensioners and Superannuants Association policy manager Paul Versteege says the indexation system now in place works well and, while it's unfortunate there won't be an increase in September, that doesn't mean it needs to be fiddled with.

However, he does want to see a permanent lift or supplement to the base payment for full-pension single people who are struggling to get by just above the poverty line.