Mother, 28, whose acne was so severe she refused to take her kids to the school gates, has praised a £6 charcoal bar for clearing her skin in just EIGHT weeks

A mother-of-two whose acne was so severe she wouldn’t take her children to the school gates has praised a £6 charcoal bar for dramatically improving her skin in just eight weeks.

Rebecca John, 28, from Swindon, told how she never suffered from acne as a teenager, but everything changed after she had her second child at the age of 24.

The stay-at-home mum, whose third child is due on Christmas Day, recalled how a combination of stress and hormones triggered her skin to deteriorate.

Despite trying many over-the-counter creams and prescriptions, Rebecca found an unlikely solution in the form of a charcoal bar from vegan skincare brand, Carbon Theory.

‘My face was covered in large pustules,’ she explained. ‘It was never a case of one or two small blackheads.’

‘Over the next four years by skin got progressively worse. On bad days I wouldn’t even leave the house.’ 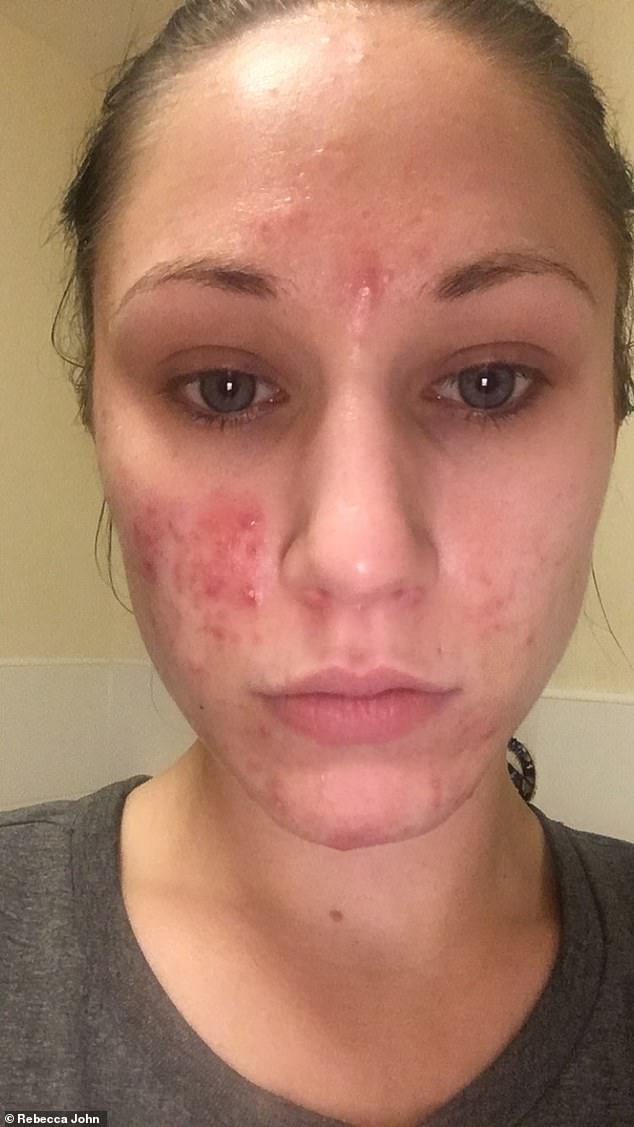 Rebecca John, 28, from Swindon, has praised a £6 charcoal bar for dramatically improving her severe acne in just eight weeks 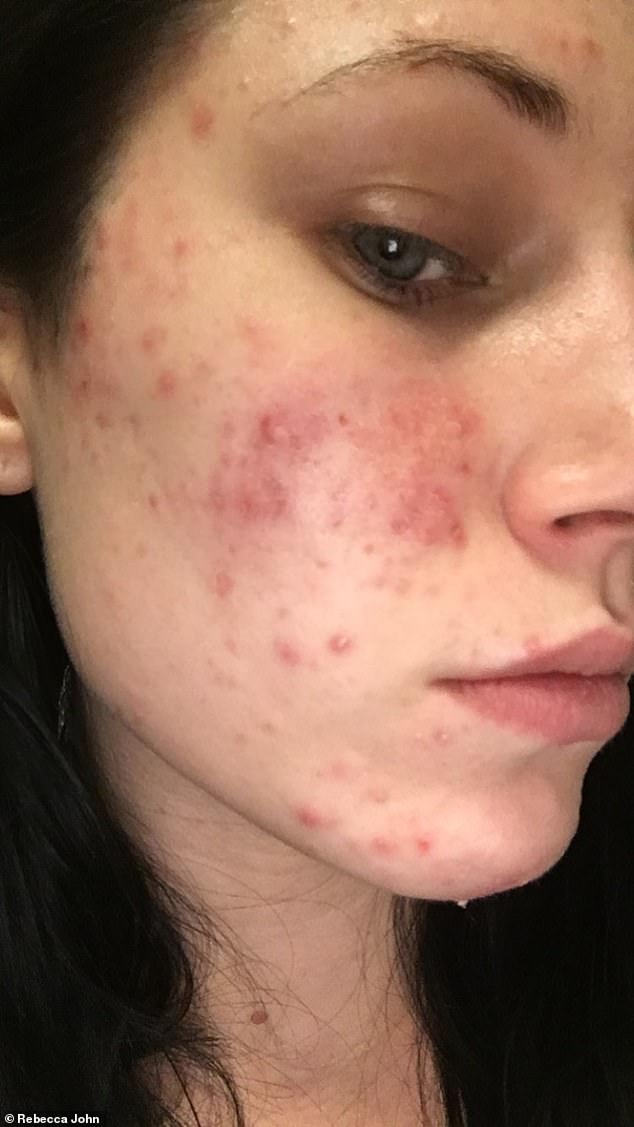 The mother-of-two never suffered from acne as a teenager, but everything changed after she had her second child at the age of 24. Pictured, Rebecca before using the product on 13 February 2019 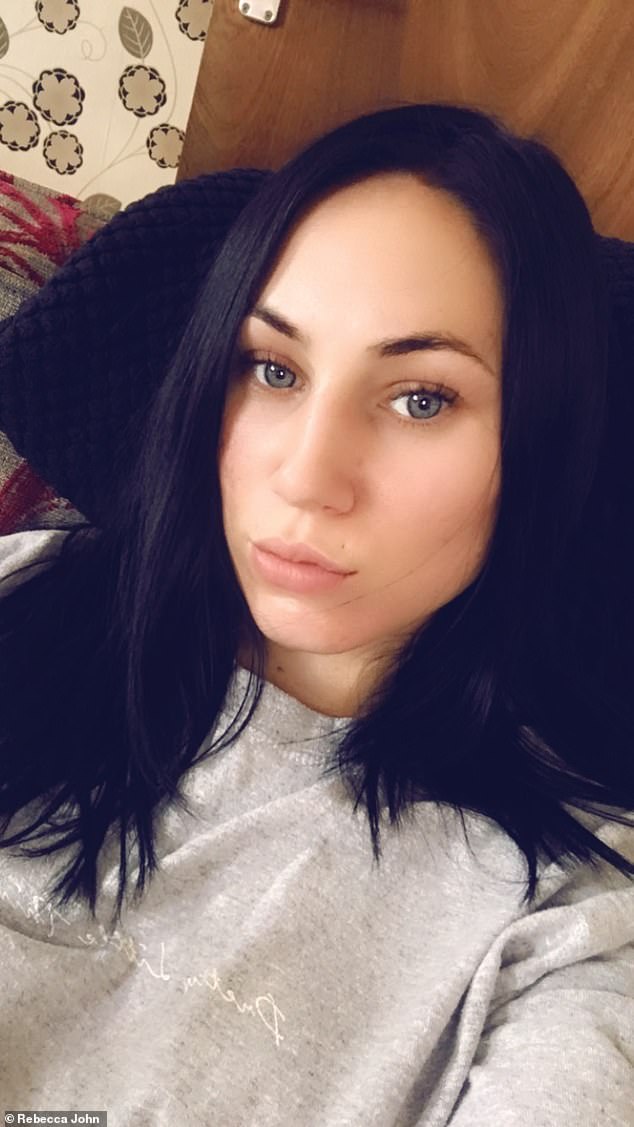 Rebecca, who has praised the vegan skincare range for clearing her skin, no longer has to wear makeup to leave the house. Pictured, make-up free in August 2019

She continued: ‘I wouldn’t let my family see me without full makeup, not even my partner. As supportive as he was, I would never let him stay over as I didn’t want him to see my face.’

Rebecca’s acne started affecting every aspect of her life. She wouldn’t have photos taken with her children on special occasions and as such, felt like she missed out,

‘I felt completely horrific,’ she explained. ‘I wouldn’t go to the park with other mums and their children, and I would often ask friends to collect my children from school.’

‘I just felt like everyone at the school gates was looking at me, and I didn’t want to embarrass my children in front of their school friends.’ 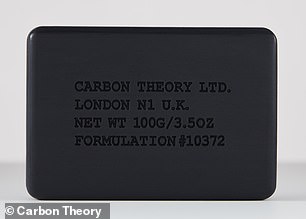 She added: ‘Even my children noticed. My four-year-old son commented: “Mummy – your face is disgusting!”

Rebecca attempted to treat her acne with various treatments – both prescription and over-the-counter.

‘Nothing worked,’ she explained. ‘I tried everything.’

‘My GP prescribed me the antibiotic Lymecycline, but it made no difference.’

‘I bought various over-the-counter treatments including benzoyl peroxide but nothing ever worked.’ 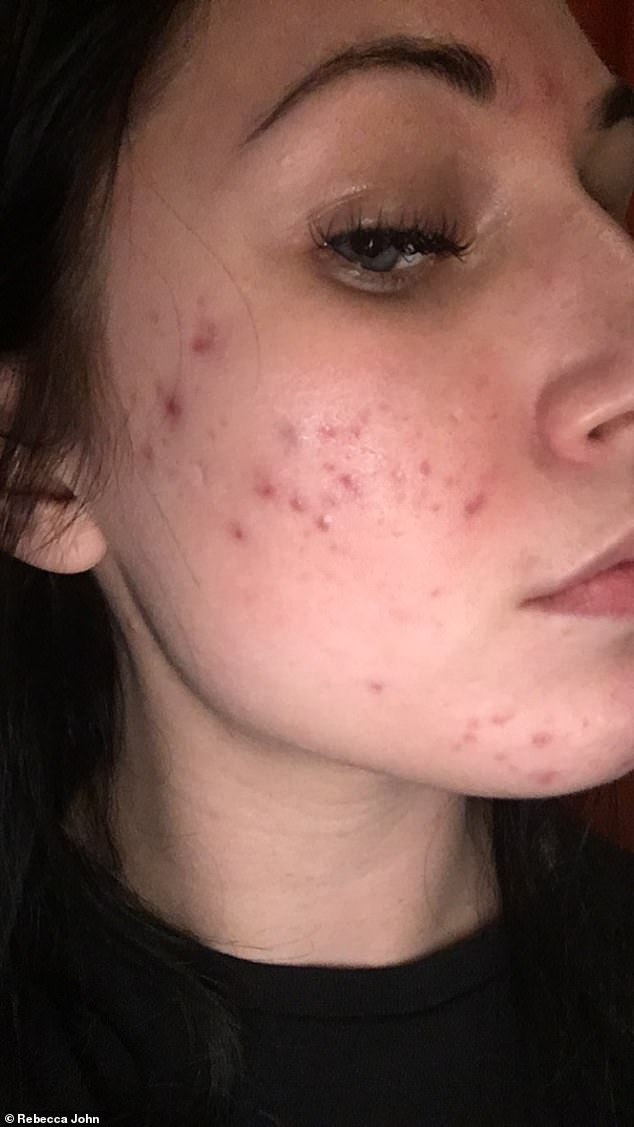 Before using the ‘miracle’ product, Rebecca told how she would never let her partner stay over as she didn’t want him to see her face. Pictured, on 21 April 2019 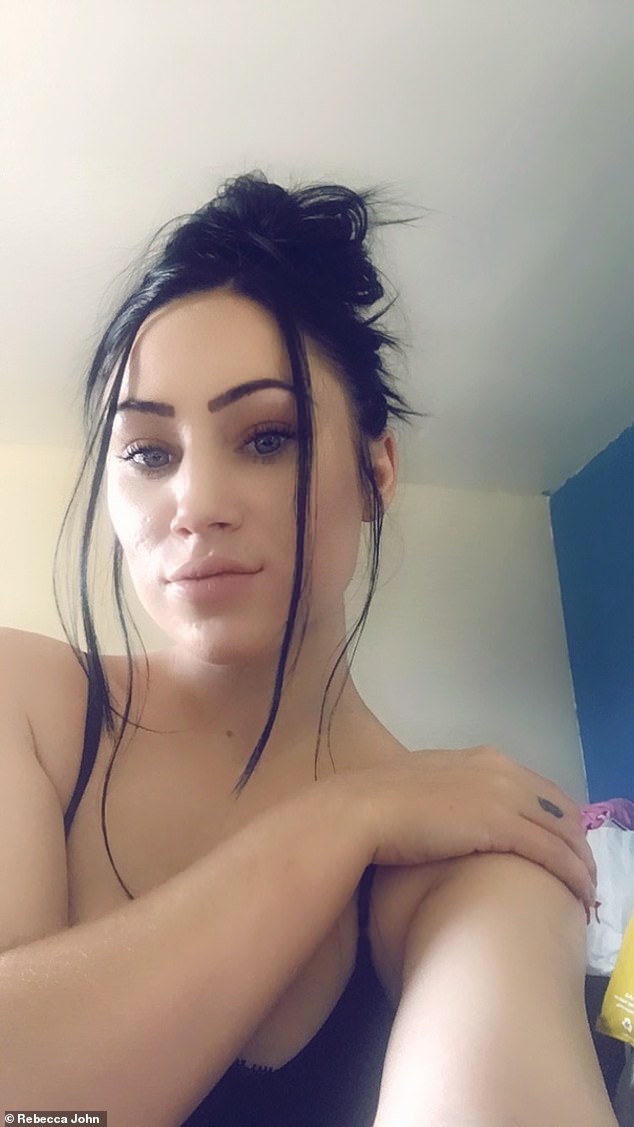 The stay-at-home mum told how between February and July this year, her skin underwent a huge transformation. Pictured, Rebecca with her hair up in August after using the product

It was in February 2019 when Rebecca spotted a vegan, charcoal-based skincare range called Carbon Theory on the Boots website.

‘I was actually shopping for something else when I spotted Carbon Theory,’ she explained. ‘The Facial Cleansing bar was only £6 and had received brilliant reviews’.

Rebecca bought the bar and started using it every day – morning and night.

‘It drew the toxins out of my skin,’ she explained. ‘I couldn’t believe it. After eight weeks my skin was clear.’ 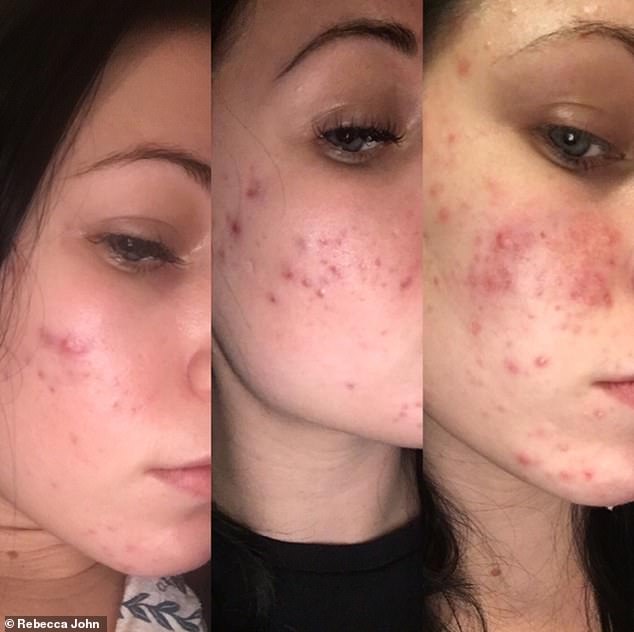 Rebecca told how she tried to treat her acne with various treatments before finding the charcoal bar. Pictured, Rebecca’s acne from March to April 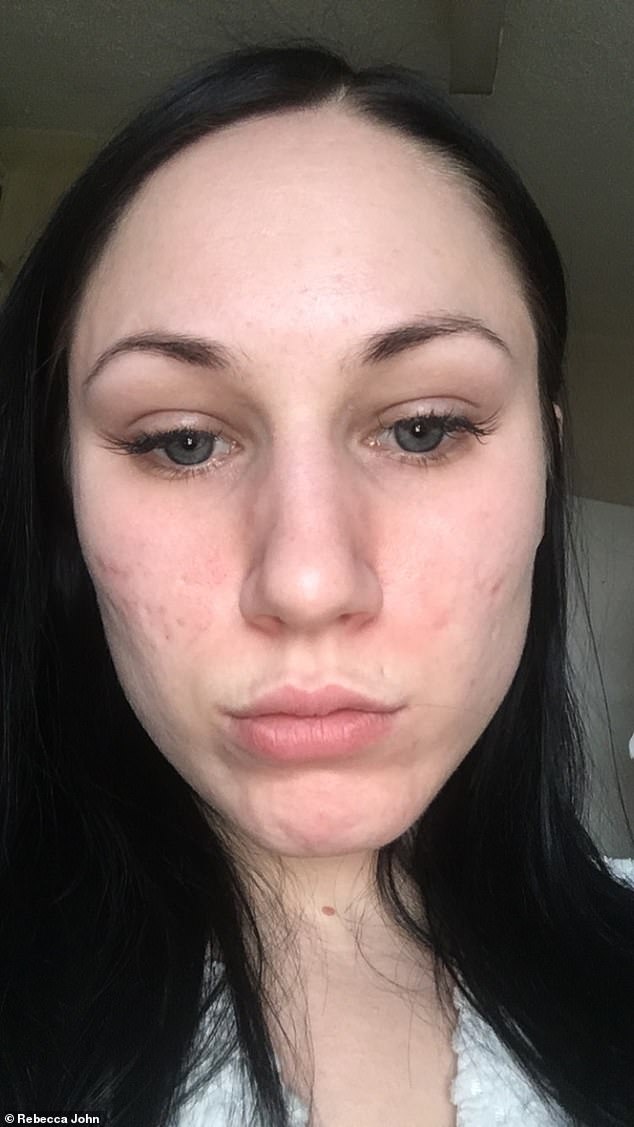 When her skin was at its worst, Rebecca felt like everyone at the school gates was looking at her. Pictured, the mother-of-two in June 2019 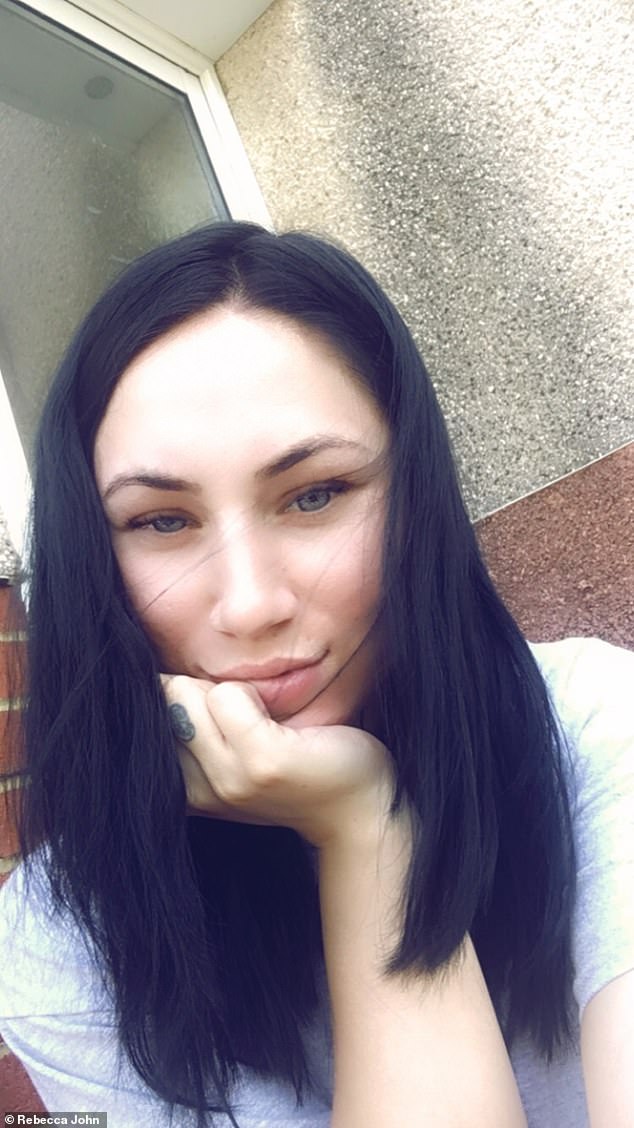 Rebecca (pictured) on August 21 2019, has only had two small spots in six months – and said her acne has ‘completely gone’

She continued: ‘Between February and July this year my skin underwent a huge transformation. I no longer had to wear makeup to leave the house and everyone noticed how great my skin looked’.

She added: ‘I’ve only had two small spots in six months – my acne has completely gone. ‘I feel like a different person – I’m so much happier’.

Rebecca shared her photos with Carbon Theory on Instagram and has been inundated with messages from other acne sufferers – including a mum whose 11-year-old son has the skin condition.

‘It’s actually been really lovely to hear from so many people,’ she said. ‘I’ve felt very conscious of sharing my photos, and it’s been met with such a positive response’. 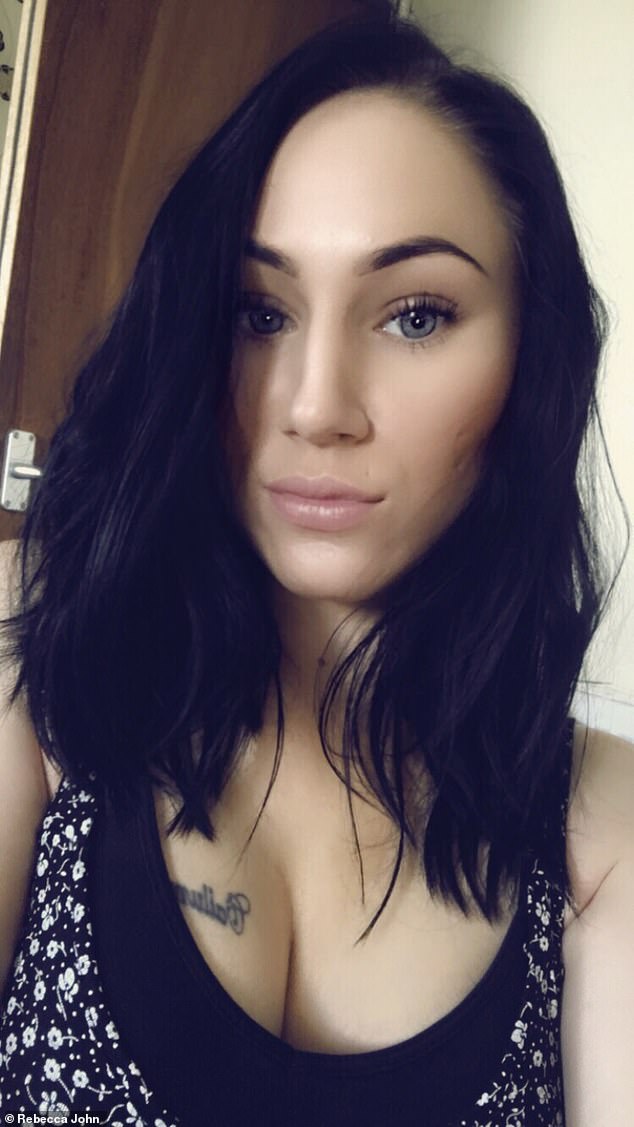 Since her skin has cleared up, the stay-at-home mother said she feels like a different person. Pictured, acne-free in August 2019 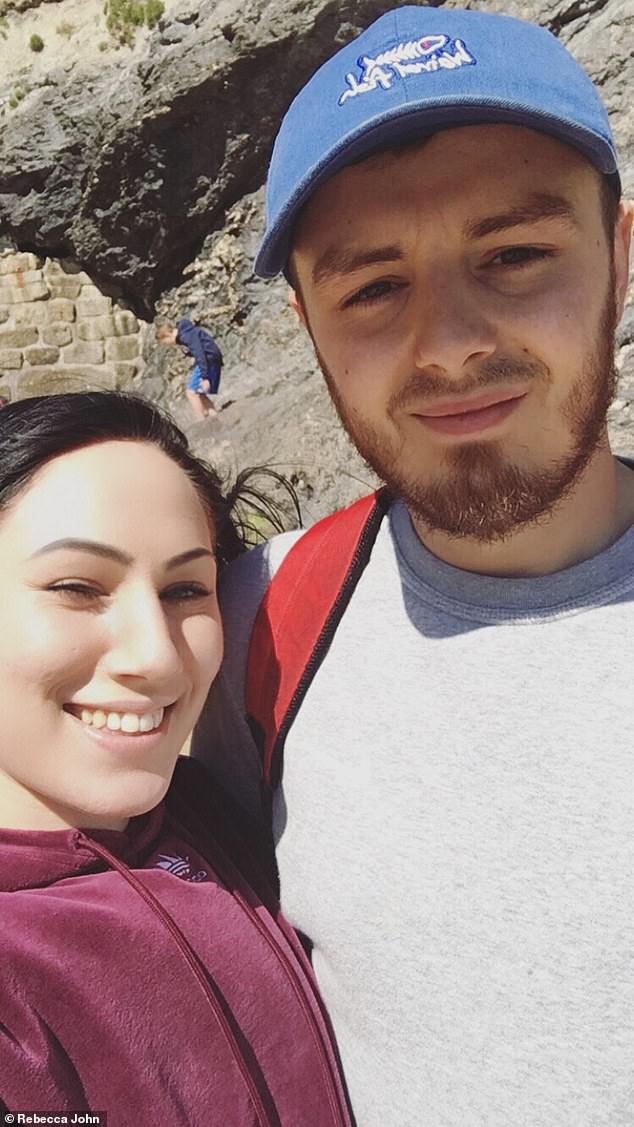 Rebecca is so much more confidence since her adult acne cleared up. Pictured, with her partner at the beach in August 2019 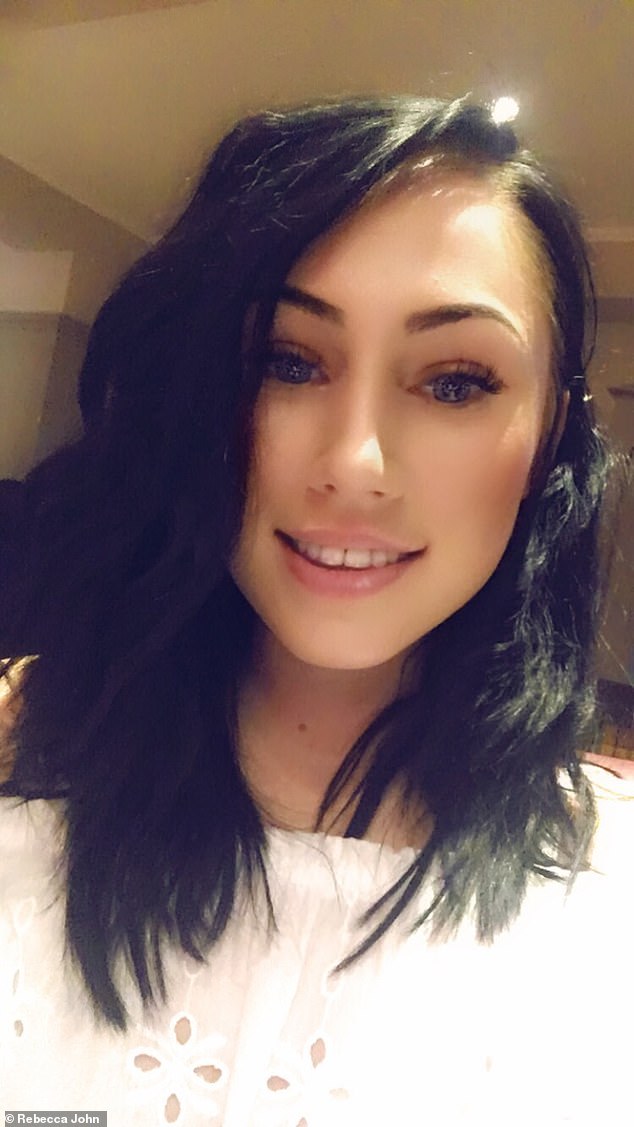 Since sharing her pictures on social media, Rebecca has been inundated with messages from other acne sufferers – including a mum whose 11-year-old son has the skin condition. Pictured with full makeup in August 2019 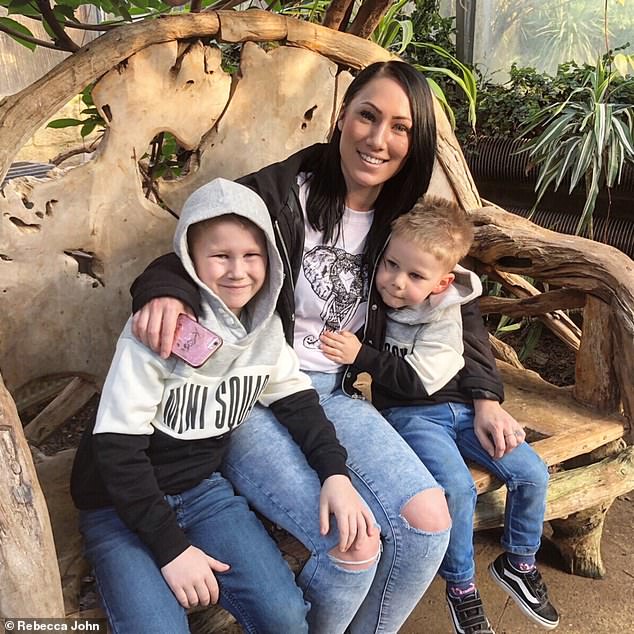 Rebecca told how the product drew the toxins out of her skin. Pictured, with her sons in May, 2019