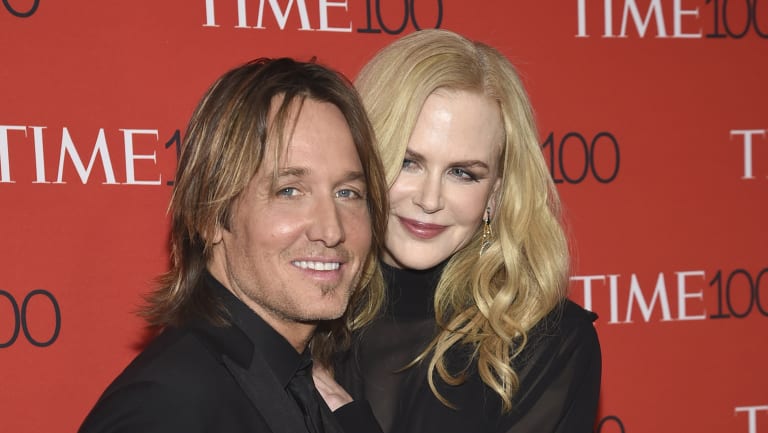 Keith Urban, left, and Nicole Kidman attend the Time 100 Gala celebrating the 100 most influential people in the world in April.

In case you missed it, Nicole Kidman and Keith Urban celebrated their 12th wedding anniversary this week.

The couple, who rank alongside the platypus in terms of Australian iconography, have made no secret of their affection for each other since they met in 2005, whether that be on stage, where they can be found earnestly crooning into one another's mouths; or on the red carpet, where they have been photographed nuzzling into each other's necks with the type of unselfconsciousness not normally seen outside of a hot tub. 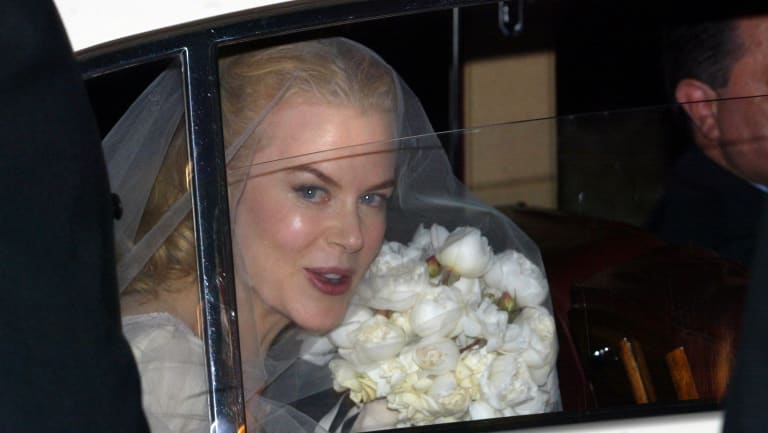 Nicole Kidman wore a Balenciaga haute couture gown for her wedding to Keith Urban in Manly in 2006.

We can be sure then, that the deep, penetrating, down-home eros they share is still as fresh as it was on the night they met. Cynics like me assumed it was distance that made their loins burn with lust, but Kidman has revealed in an interview this week that distance is only part of the story. The real glue that has kept them craving full-body contact for more than a decade is a rule about texting.

"We’ve never texted. That is so not our relationship" Kidman told Parade magazine.

"We call. We’ve done this since the very beginning. The reason it started … was because I didn’t know how to text and it just kind of worked for us. So now we don’t."

All right. Kidman doesn't know how to press keys on a mobile phone? She's 51, not 101, right? Forgive me my ageism. Maybe it's the rings?

What happens when one of them is running late? Or what if Nicole's on set and Sunday and Faith are demanding to know where Mummy hid the Logie for Bangkok Hilton?

"We just do voice-to-voice or skin-to-skin, as we always say." Of course they do. I'm sure hair-to-hair is also an option. I mean, now that Brad and Angelina are separated they really have no competition as far as Power Couple Hair goes.

"We talk all the time and we FaceTime but we just don’t text because I feel like texting can be misrepresentative at times. And I’ve had the thing where I reread texts and I’m like, 'What does that mean?' and then read it to somebody and go 'Can you interpret that?' I don’t want that between my lover and I."

Ignoring the fact that Kidman just referred to Keith Urban as her "lover", I have to wonder what room there is for misunderstanding in "Can u pick up bread on way home?"

Who even has time to reread "What's happening with dinner?" We all know what the answer is: "Thai."

Ah, but there's the rub! Kidman and Urban aren't stopping by Woollies on the way back to their sprawling mansion in Nashville, are they? Somebody else is picking up the food before braising it gently, garnishing it with fresh herbs and plating it up, presumably so the couple can spend time feeding it to one another, in between low groans.

Which is why this rule of theirs has been conceived entirely in a bubble. It's a wonderful bubble, full of Grammys and Golden Globes and modest selfies with Meryl Streep, but it's still a bubble.

So it doesn't really work for the rest of us snivelling hamsters, trying our best to squeeze some couch time into our over-worked, under-cooked lives full of snarling traffic and missed emails and parent-teacher interviews we are perennially running late for.

It's not always convenient for the average married couple to demand "FaceTime", especially if that face is behind the wheel and there are two kids fighting over a YouTube video in the back seat.

Kidman will text if it is required, although, as she explained, "I try not to be on the phone and texting. I’m a terrible texter. And I try to not be really prompt with returning texts because then you get used to that kind of person."

So, in summary: Kidman will leave you on read. Unless you're part of her immediate family, in which case, she needs to see your face (and, let's be honest, if it's Keith, she probably wants full body. Hey, I'm just reporting what I imagine – don't hate the messenger).

"It’s OK not to be completely available all of the time" she told Parade. "And that’s a really big lesson for someone who wants to be responsible." Uh, it sure is. Because if Kidman worked for, say, oh, I don't know – a newspaper or online news site – or any sort of full-time job, really – she might run the risk of earning a reputation as a bit of a lightweight.

If it's one thing Australians are known for (apart from platypus), it's our terrible work/life balance. And maybe that's the problem. Maybe if we were all a little more into skin-on-skin and as little less into our screens we wouldn't need to text? Nah, it's the bubble.