Nigella Lawson is bombarded with lewd and sexist comments

Nigella Lawson has been bombarded with lewd tweets in response to a tweet about one of her favourite spices.

Responding to a question about her recipe books the TV chef expressed her love for cumin seeds, prompting an influx of replies from people deliberately misinterpreting her words.

The subject came up when a fan asked on Twitter: ‘Hi @Nigella_Lawson. My daughter, having studied your recipe books intently, is convinced you are a mad fan of cumin seeds and that they permeate your cooking. Is that correct?’

To which Nigella responded: ‘I certainly love cumin’.

While some of the hundreds of comments it attracted were light-hearted, many were crude or derogatory, prompting the chef to describe the reaction it sparked online as ‘dispiriting’. 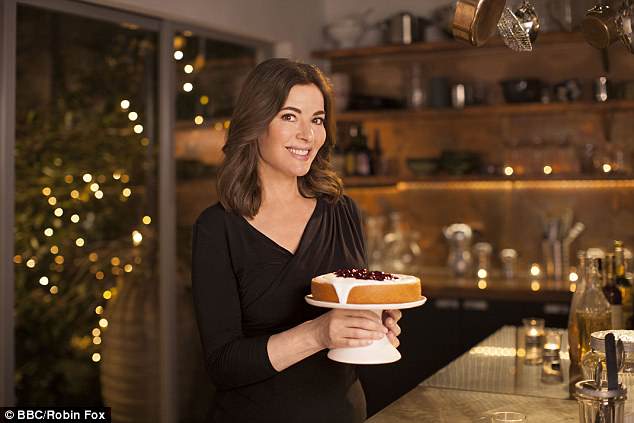 Almost immediately after posting her answer, the 58-year-old received dozens of crude tweets from fans pointing out the double meaning.

One wrote: ‘… there we have it The Queen of the Double Entendre.’

‘I nearly spat out my tea when I first read this’ piped in another.

And despite Nigella dismissing any suggestion that the innuendo was deliberate, the jibes kept coming, with another insisting: ‘You know what you did there’, Her tweet was shared and liked thousands of times.

Nigella again took to Twitter a few hours after posting, to write: ‘No double entendre intended in the slightest. What’s wrong with you all?’

She later described the the tone of the online comments as ‘dispiriting’.

And while many Twitter users insisted it was a deliberate innuendo, fans of the chef jumped to her defence. 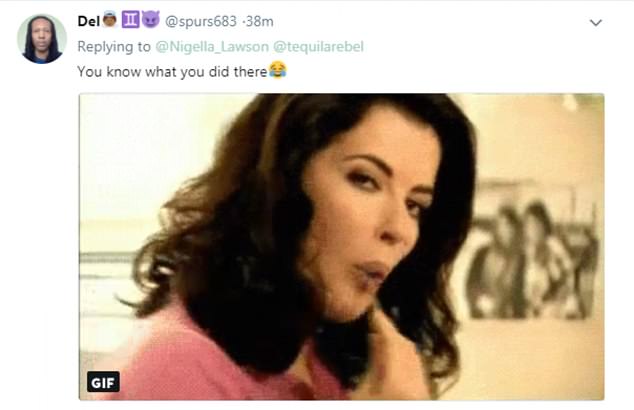 One wrote: ‘I sometimes think people playing bait-the-celeb lose sight of the fact that said celeb is actually a person too.’

Another agreed adding: ‘I’m sorry. It really sucks to have people twist things in such a gross way all the time, and to always comment on your appearance and happiness etc. It must make one super uncomfortable.’

This is not the first time that Nigella has spoken out about her so-called innuendos.

The Simply Nigella host’s supposed use of sexual innuendo has become a pop-culture reference, parodied by shows such as Modern Family and The Simpsons. 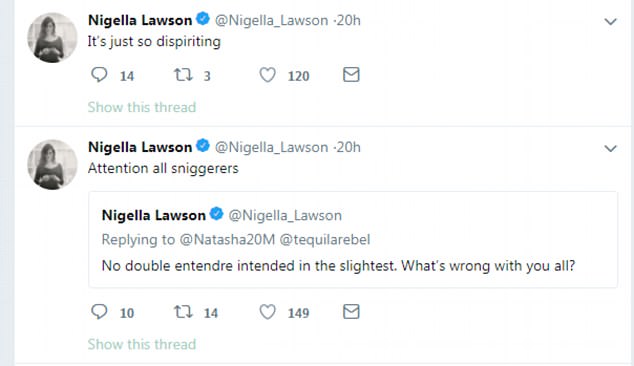 At the Oxford Literary Festival in March last year, Nigella explained the sexy reputation she’s earned was owed to clever editing by the production company.

‘I never ever wanted to be on TV I’m not a performer,’ she said when probed on the topic.

‘When that first series came out I was astonished to be told I was suggestive and coquettish and so forth because the reality is I’m a straight forward person.

‘I haven’t got a coquettish manner so I want to say two things … One is television is glamorising so they always make you look nicer than you look.

‘Two is that it’s an editor’s medium, so obviously how you put something together will reinforce that.’

‘But I’ll do something and people will say it’s rude or a double entendre and I feel like saying “well can you please explain it to me, I don’t get it?” ‘