Shiny floor talent shows including Australian Idol, The X Factor and The Voice have broken ratings records during the past two decades. But their reliance on studio audiences and live viewer voting – which leaves them especially vulnerable to COVID-19 disruptions – has made this genre less attractive to the Nine Network.

"When COVID initially hit, it really impacted The Voice because we couldn’t have a live audience," says Nine’s program director, Hamish Turner. "Our ambition for next year is to deliver a diverse slate [with less risk]."

On Wednesday, Nine (the owner of this masthead) unveiled its programming line-up for 2021. Notably absent was The Voice, which will screen on rival network Seven next year. The estimated $40 million it cost Nine to produce the singing contest will be invested in other series that can be filmed further in advance. 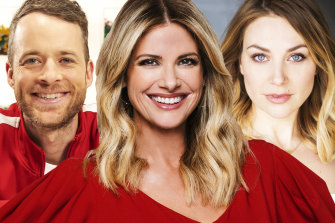 "It gives us more flexibility from a scheduling perspective," Turner says. "We want to give the advertising market the confidence we can deliver what we're selling."

It is still unclear whether the Tokyo Olympics, set to screen on Seven, will proceed next year. "If it goes ahead, our schedule will look one way and if it doesn't, it will look a different way," Turner says. "Having that optionality is a good thing for us."

The coronavirus pandemic was the main driver of large falls in advertising spend this year. It also forced TV broadcasters to halt productions and pull programs from air, and prompted Nine, Seven and 10 to request reductions on the amount they pay to air sport. While the market is recovering, broadcasters are looking at ways to provide more certainty to advertisers. In addition to its 2021 programming slate, Nine has announced a new data deal with Adobe and new capabilities to buy ads across the network and other divisions including publishing and radio.

New prime time series on Nine include a local adaptation of US format Celebrity IOU, in which well-known Australians arrange surprise home renovations for people who've played a pivotal role in their lives; a reality format called Beach House Escape, involving 10 contestants renovating an old seaside home; and The Parent Jury, in which participants attempt to prove the superiority of their child-rearing methods.

While the pandemic thwarted Nine's plans to launch The Parent Jury this year, the delay allowed producers to secure Jo Frost – star of the British mid-noughties reality hit Supernanny – as host in 2021. "That show was getting two million viewers in Australia [in the mid-2000s]," Turner says. "Having her come out here is a real coup."

British billionaire Lord Alan Sugar will star in The Celebrity Apprentice, which last aired on Nine in 2015; and Sophie Monk will present a revival of Beauty and the Geek, which most recently aired on Seven in 2014. It is unclear if Monk will continue hosting Love Island, which will shoot its third season on Queensland’s Gold Coast.

Veteran journalist Liz Hayes will anchor Under Investigation, a current affairs series that examines a single story each week, from cold case crimes to divisive social debates. Every episode will feature a panel of experts and participation from a studio audience. Nine will also debut the factual series Mega Zoo, which spans Victoria's Melbourne Zoo, Werribee Open Range Zoo and Healesville Sanctuary.

Nine is yet to confirm the return of Halifax: Retribution, Australian Crime Stories or Talking Married, a "companion show" to Married At First Sight.

While Seven and Foxtel are at loggerheads with Cricket Australia, claiming that pandemic restrictions will diminish the quality of upcoming games, Turner is optimistic about Nine's Australian Open tennis coverage this summer. "We're working [with Tennis Australia to ensure] we get the best players in the world," he says.

In 2019, Nine ended Seven’s 12-year winning streak by reclaiming its title as Australia’s most-watched television network. So far this year, Nine is No. 1 among all viewers and the key advertising demographics of 25-54 and 16-39.

"It’s been a tough year for everyone," Turner says. "Incorporating more feel-good programming as part of our slate is absolutely a deliberate decision for us."