Nirvana’s ‘Nevermind’ At 30: 9 Facts You Should Know About The Iconic Album

Here we are now, entertain us. Thirty years ago today, Nirvana released ‘Nevermind,’ and here are some facts you might not know about this landmark album.

Rock music changed thirty years ago today. On September 24, 1991, Nirvana released their second album, Nevermind. The band – Kurt Cobain, Krist Novoselic, and Dave Grohl – would become one of the most prominent groups in the world, helping usher in the golden age of alternative rock. Though Kurt’s tragic suicide in 1994 cut the band’s tenure short, Nevermind continues to have a profound effect on music, three decades later.

Nirvana first formed in the early 1980s, when Kurt and Krist – two high school friends in Aberdeen, Washington – formed a band that blended the sounds of punk, garage, and metal. The sound, ultimately dubbed “grunge,” would be captured on their 1989 debut album, Bleach, on Sub Pop. Featuring songs “About A Girl,” “Mr. Moustache,” and “Paper Cuts,” it received some positive reviews from critics, despite not selling well. It would be the follow-up that would turn Nirvana into a household name and an indisputable legend in the music world. 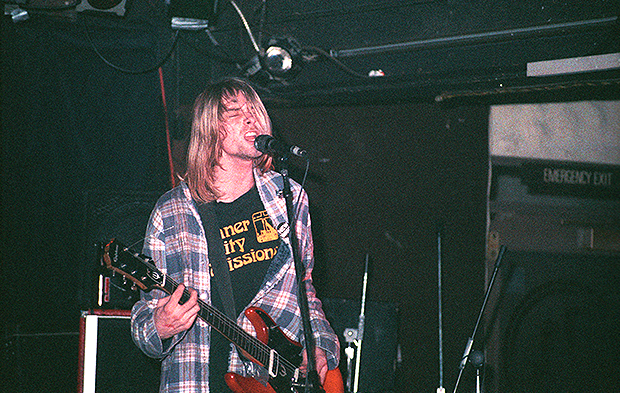 As Nevermind celebrates its 30th anniversary (which will see a special reissue that contains “a total of 94 audio and video tracks–70 previously unreleased–will be made available across configurations ranging from Super Deluxe Editions to standard digital/CD and single-disc vinyl with bonus 7-inch”), here are some facts that you might not know about this album.

Nirvana’s Nevermind: What You Should Know

The Album Was Originally Titled Sheep.

The phrase “nevermind” is synonymous with GenX, a generation associated with disillusionment, depression, and angst. It’s hard to imagine this era-defining album being called anything else, but there was a time that Kurt entertained a different tile for Nirvana’s follow-up to Bleach. While working on the band’s sophomore release, Kurt sketched a mock-up of promotional materials in his journal, per The New Statesmen. “NIRVANA. Flowers. Perfume. Candy. Puppies. Love. Generational Solidarity. And Killing Your Parents. SHEEP.” Kurt added, “No 1 on billbored top 100 for 36 consecutive weaks…  2 times on the cover of Bowling Stoned, Hailed as the most original thought provoking and important band of our decade by Thyme & Newsweak.”

“We were thinking about calling it Sheep,” bassist Krist Novoselic said, per Spin, “because we were so cynical.”

Kurt’s journals also detail his fascination with birth and pregnancy. The cover and title of the band’s third album, In Utero, show this. After watching a documentary on water births with Dave Grohl, Kurt wanted to feature a picture of a water birth on the cover, according to Rolling Stone. However, the label, Geffen Records, decided that it was too graphic. So, a follow-up plan was hatched. 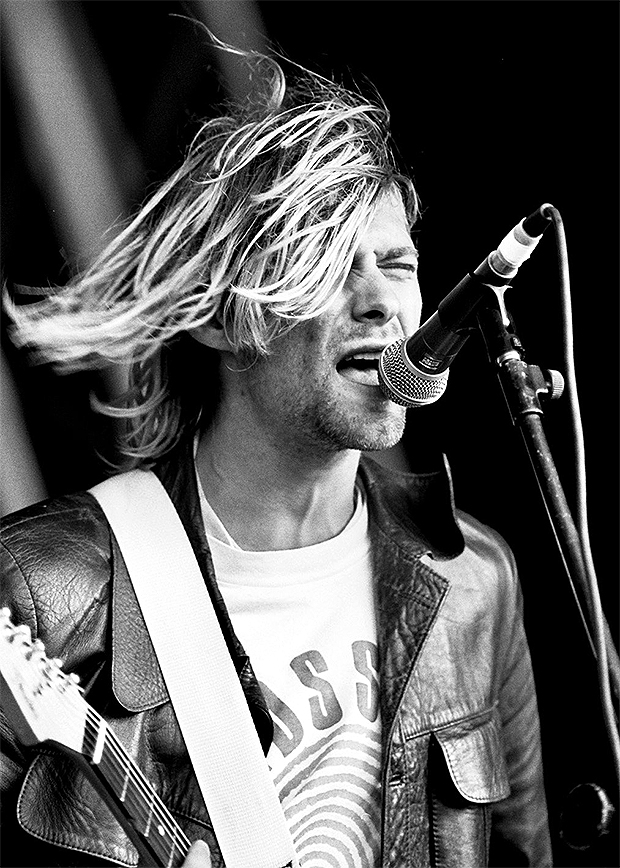 The Baby On The Nevermind Cover Is Named Spencer Elden.

Geffen Records hired Kirk Weddle, an advertising photographer specializing in underwater work, to photograph an alternative cover. “At the time, I was mostly shooting cars — brochures and stuff. I didn’t even know Nirvana. Kurt originally wanted a shot of a kid being born underwater, but Geffen thought that was a little extreme. I can’t say for sure if the chasing the dollar bill was a dig at the label, but that’s how it looks,” said Weddle, per Spin.

Weddle borrowed Spencer Elden, the then-four-month-old son of family friends, for a shoot. “We originally shot Spencer — one dunk, give him a little shove, bang bang bang — and that was it, a half a roll of film,” said Kirk. But, he felt guilty about handing in such little work, so he went to a school where they taught babies how to swim. He offered $50 to parents to try their kids out and $200 if a child was picked as a model. “This one girl was like a machine — couldn’t walk, couldn’t talk, but she would just motor around underwater. The labels saw the photos and were like, ‘We want the d-ck, we want the d-ck.’ It was bizarre,” said Weddle. “I have no idea at all who the girl was or where she is now. I’d like to know what happened to that chick.”

Yes, the Nirvana baby was almost a female. No clue on whether or not she would have sued the band, the photographer, and the label in 2021 like Spencer did. Though Spencer, a street artist, had embraced the title of “Nevermind Baby” in the past, his lawsuit cited years of emotional distress and alleged the picture constituted child pornography.

Most Of The Songs Were Finished In Under A Week.

Nirvana released Bleach in June 1989 via Sub Pop records. The album, while not commercially successful, built a buzz around the band. Sub Pop connected Nirvana with producer Butch Vig (who would help form Garbage in the mid-90s). In April 1990, the band began working on early versions of songs (like “Polly” and “Lithium”) at Vig’s Smart Studios in Madison, Wisconsin.

The album was delayed by a summer tour, a lineup change, and a label change. In the 1990s, Sub Pop was looking to find a distribution deal with a major label. Nirvana decided that if their independent label was going to get help from a major, they might as well sign with a major. With help from Sonic Youth, who Nirvana opened for on their summer 1991 tour, the band was able to sign with Geffen Records imprint DGC Records, per Rolling Stone.

In June 1991, the band essentially re-recorded the songs for Nevermind at Sound City Studios in Van Nuys, California. It took about a week to rehearse and record the record. It was mastered in August and released in September. 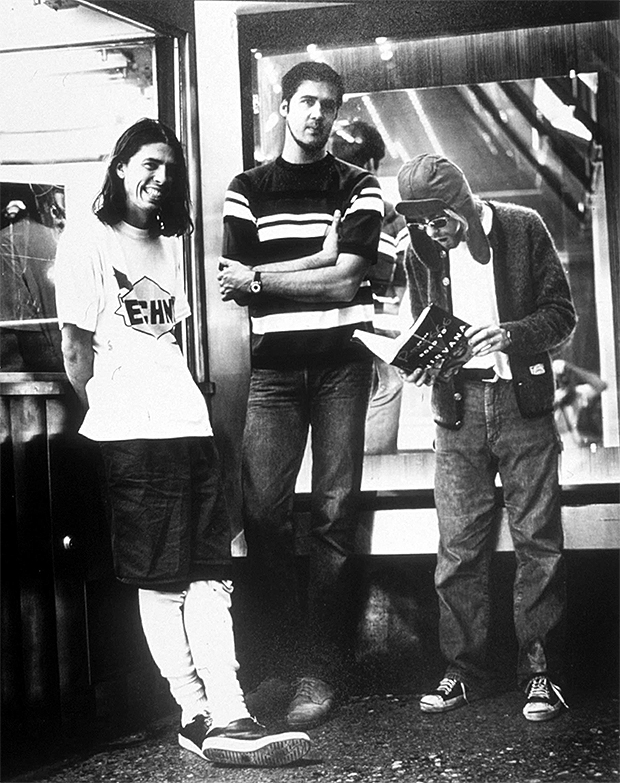 Dave Grohl Isn’t The Drummer On Every Track.

That lineup change that contributed to Nevermind’s delay? Drummer Chad Channing, who was on Bleach, left the band after the summer 1990 tour. That same year, hardcore punk band Scream disbanded. Their drummer? Dave Grohl. Dave joined the band, becoming their fifth and final drummer, and recorded most of the drum parts on Nevermind – but not all. The track “Polly” was used from the Smart Studios sessions, with Channing’s drumming intact. He was uncredited on the original release.

The Vocal Layering Was Influenced By The Beatles And John Lennon.

Compared to Nirvana’s first album, Nevermind was cleaner and more accessible to the public. One of those elements is Kurt’s double-tracked vocals, per Rolling Stone, which was an idea from producer Butch Vig. Vig cited The Beatles producer George Martin and how he layered John Lennon’s vocals to add a fuller, richer feel to the song. Initially, Kurt was “reluctant to do so because he thought it sounded fake,” Vig said, but after telling Kurt that John Lennon did it, he “pretty much double-tracked all the vocals after that.” 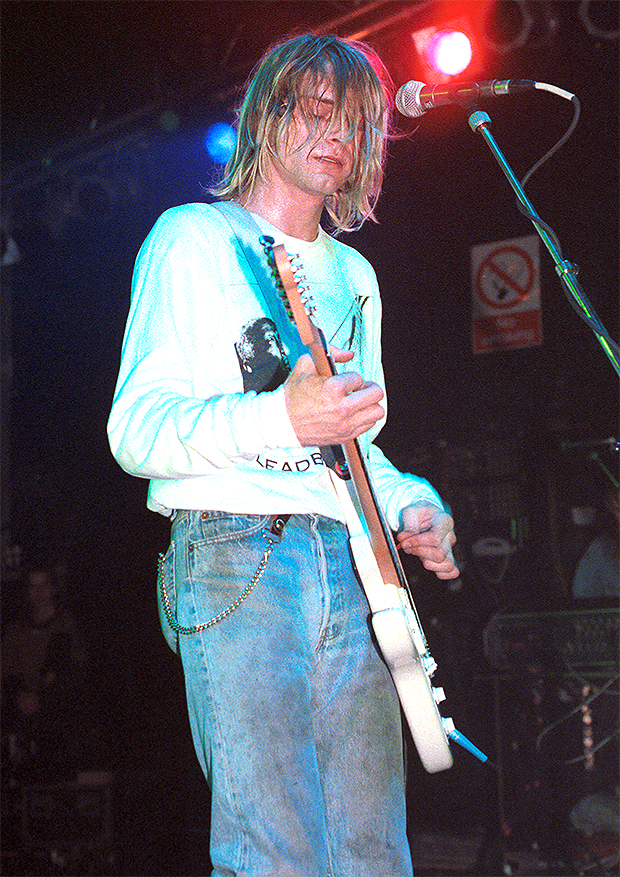 Nevermind Owes Its Biggest Hit To Disco And Riot Grrl.

Thanks to Nevermind’s success and influence on pop culture, Dave Grohl’s status as a drummer has been elevated to “rock demigod” status, but he would be the first to tell you that he’s a “basic” drummer. In fact, he said just that (“I’m the most basic f-cking drummer”) during a 2021 interview with Pharrell Williams, per Spin. Dave also revealed that he looked to an unlikely source for inspiration for his drum parts on Nevermind.

“If you listen to Nevermind,” he said, “I pulled so much stuff from the Gap Band and Cameo and [Chic’s] Tony Thompson on every one of those songs.” Dave slapped his lap, belting out the opening fill for “Smells Like Teen Spirt,” and said, “All that… that’s old disco!”

While David got his drumming for the song from disco, the title – “Smells Like Teen Spirit” – comes from Kathleen Hana, frontperson for riot grrl pioneers Bikini Kill. The two bands – Nirvana and Bikini Kill – were close. Kurt even dated Bikini Kill’s Tobi Vail at one point.

“I remember that night,” Kathleen told Double J about the inspiration behind one of grunge’s biggest hits. “We were just hanging out and getting drunk. At the grocery store in Olympia, me and Tobi were like ‘Ewww, look at this, it’s so crazy! It’s called Teen Spirit!’ We were laughing, saying ‘Your arm smells like Teen Spirit’ or whatever. We were both joking around because the name looked so funny. I mean, who names a deodorant Teen Spirit?”

Kathleen ultimately ended up hanging out with Kurt and Dave that night. They got drunk, and “smashed everything in Kurt’s room.” During the frenzy, Kathleen grabbed a Sharpie marker, and wrote the immortal words – “Kurt smells like Teen Spirit” – on the wall. Apparently, Kurt found that inspirational, and he reached out to her about using it. “He called me and asked me,” she said. “I was like ‘Sure. I don’t know why you’d want to call a song that. But fine.’ I just thought it was weird.”

Fun fact: Kurt had no idea that Teen Spirit was a deodorant. He learned the truth after the song was released.

Nirvana and DGC released Nevermind on September 24, 1991. It sold 6,000 copies in its first week, earning it the No. 144 position on the Billboard 200. The top album that week belonged to Gun N’ Roses, whose Use Your Illusion I and Use Your Illusion II occupied the No. 2 and No. 1 spots, respectively. The rest of the Top 5 consisted of Garth Brooks (Ropin’ The Wind), Mariah Carey (Emotions), and Metallica, with their self-titled release that would take on the name “The Black Album.”

However, it didn’t take long for Nevermind to gain traction. In October, it was certified Gold by the RIAA. In November 1991, Nirvana went on a six-week European tour, while “Smells Like Teen Spirit” gets a ton of radio play (and the video is in constant rotation on MTV.)

A sea change hit popular music. Grunge and alternative found popularity, with Nirvana hailed as the voice of a generation. Nevermind would ultimately reach the top of the Billboard charts on January 11, 1992, dethroning Michael Jackson’s Dangerous as the No. 1. The following week belonged to Garth Brooks, whose Ropin’ The Wind unseated Nevermind (the album would reach No. 1 again in February.)

Since its release, Nirvana has been certified Diamond by the RIAA. In April 2021, it notched its 520th week on the Billboard 200, becoming the seventh album in history to do that. It joins a club that includes Pink Floyd’s The Dark Side of the Moon, Bob Marley and the Wailers’ Legend, Journey’s Journey’s Greatest Hits, Metallica’s self-titled release, Guns N’ Roses’ Greatest Hits, and Eminem’s Curtain Call: The Hits (h/t Forbes). 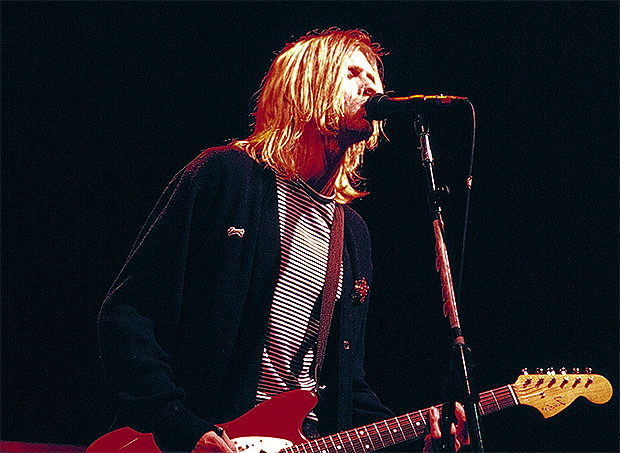 Up until 1991, Nirvana split everything equally amongst the band members. However, with the success of Nevermind, Kurt decided he should get more money since he wrote most of the songs, according to a lengthy post on Ultimate Guitar. The tiff nearly broke up the band, and Ultimate Guitar claims that the band settled on Dave and Krist getting 12.5% of royalties from only eleven songs (there are twelve songs on the album, thirteen if you count the hidden “Endless, Nameless”) with Kurt getting the rest. Nirvana’s royalties situation has been a hotly contested issue, especially following Kurt’s death in 1994. Courtney Love has made numerous complaints against the other members of the band, including a June 2021 post (h/t NME) where she claimed Dave Groh had “enriched” himself off of “Kurt’s fortune and Kurt’s goodwill.”

Despite the initial clash, the band continued. Nirvana released In Utero in Sept. 1993. It was a critical and commercial success at the time and continues to be hailed as a classic. Similarly, you can find Nevermind in many “Greatest Albums of All Time” lists, and its influence is still felt thirty years later.