It’s Cambridge vs Cambridge… again! As William sails to victory in a Bahamas regatta, how the prince and his VERY competitive wife have gone head-to-head in everything from archery to cricket

Whether it is cricket, archery, or dragon boat racing, there are no arenas off limits for the competitive Cambridges, as these latest royal tour photos prove.

Prince William, 40, and Kate, 39, went head to head in a sailing regatta in the choppy waters of the Bahamas today, in the latest installment of their long-standing sporting rivalry.

On this occasion it was William who triumphed. The Duke of Cambridge sailed across the finish five minutes ahead of four other boats, including Kate’s, which came in last.

It was a second consecutive victory on the water for William, who beat his wife in the King’s Cup charity regatta off the Isle of Wight in 2019. Kate’s boat was disqualified. 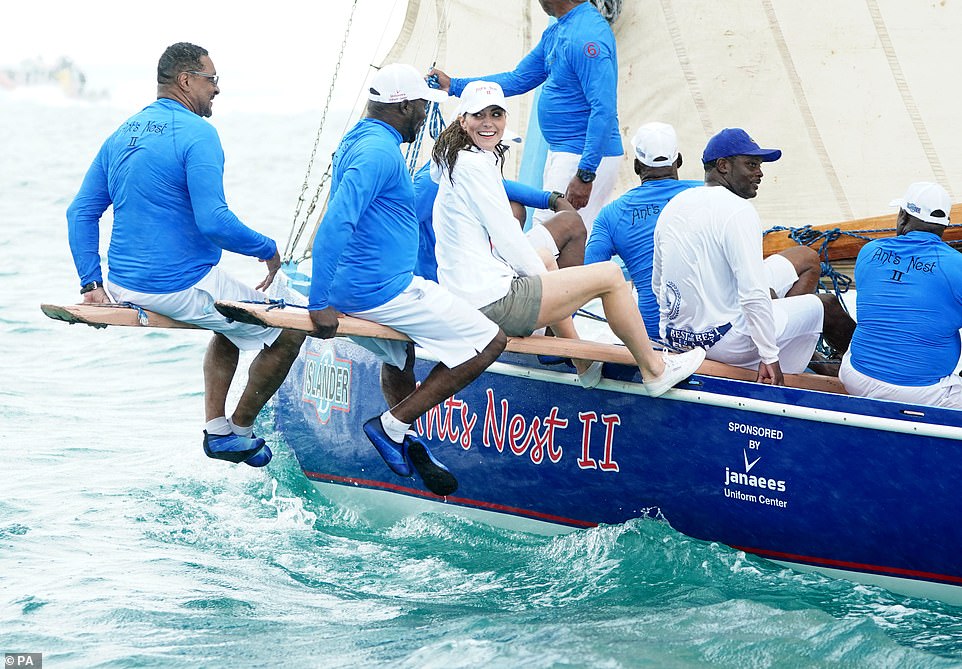 Competitive Kate! Prince William, 40, and Kate, 39, went head to head in a sailing regatta in the choppy waters of the Bahamas today, in the latest installment of their long-standing sporting rivalry 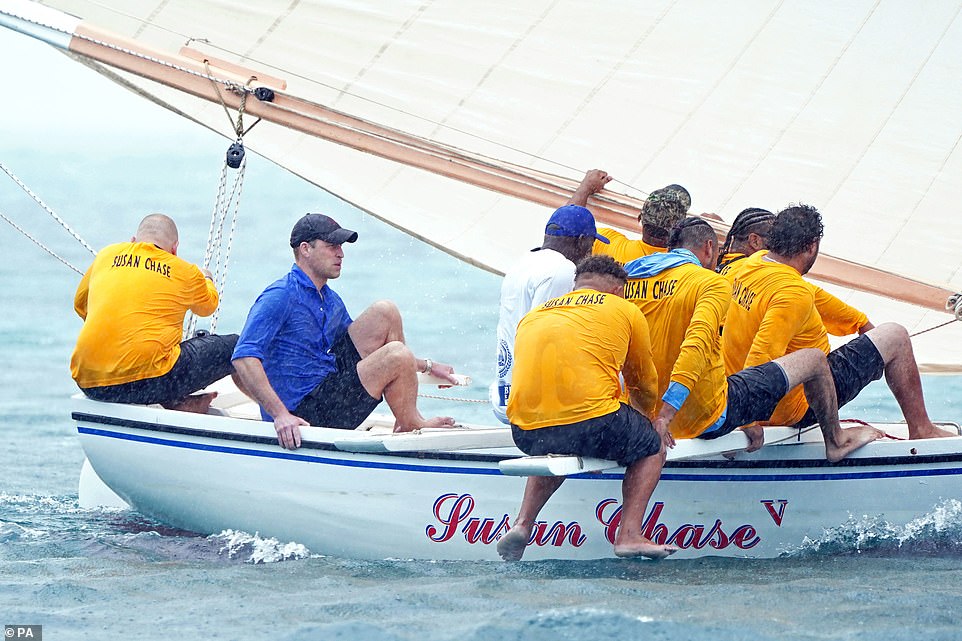 First place! On this occasion it was William who triumphed. The Duke of Cambridge sailed across the finish five minutes ahead of four other boats, including Kate’s, which came in last

Today’s loss will surely be a source of irritation for the Duchess of Cambridge, who was a sporting whizz during her Marlborough College school days and is an accomplished sailor.

She had her game face on and looked ready for the challenge as she clambered onto the boat, even as the rain came down.

Privately, the couple are said to enjoy a spot of tennis (which Kate typically wins). Publicly, there is no end to the sports and games they’re willing to try, particularly when on a royal tour.

Who could forget the dragon boat race, in 2011, in Canada, when the two went head to head – with William telling his new wife ‘there’s no chivalry in sport,’ while Kate told her team she ‘really wanted to beat’ her husband? She didn’t.

In New Zealand in 2014 there was another yacht race. This time it was Kate who triumphed.

But in 2018, Kate was again left glum-faced when she was beaten by William in a bandy hockey penalty shootout in Stockholm.

Here, a look at just some of their other sporting endeavours… 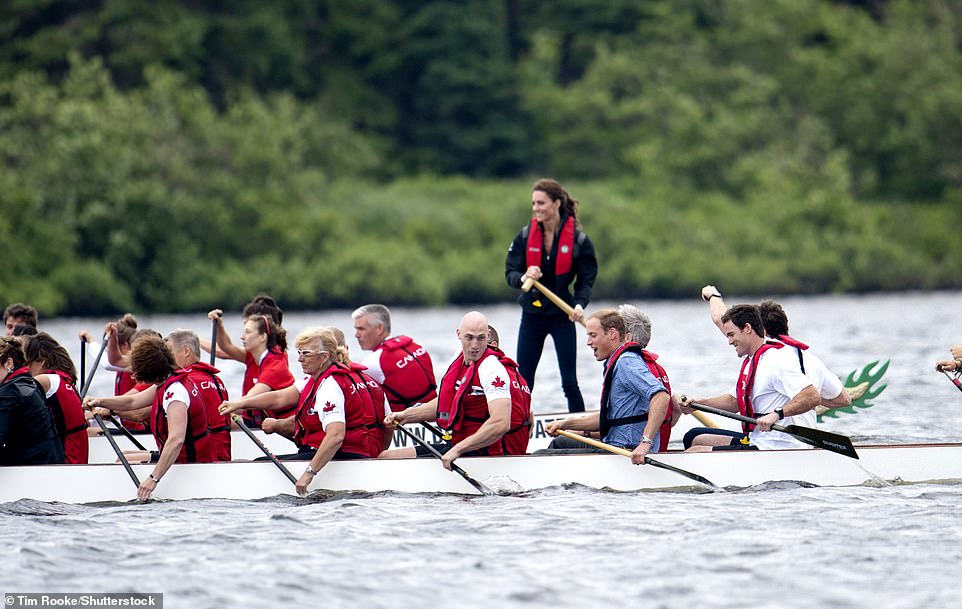 Starting as they mean to go on! Whether it is Scrabble or sport, William and Kate both like to win. In 2011, it was William who triumphed when the pair went head-to-head in a dragon boat race in Canada – their first royal tour as a married couple 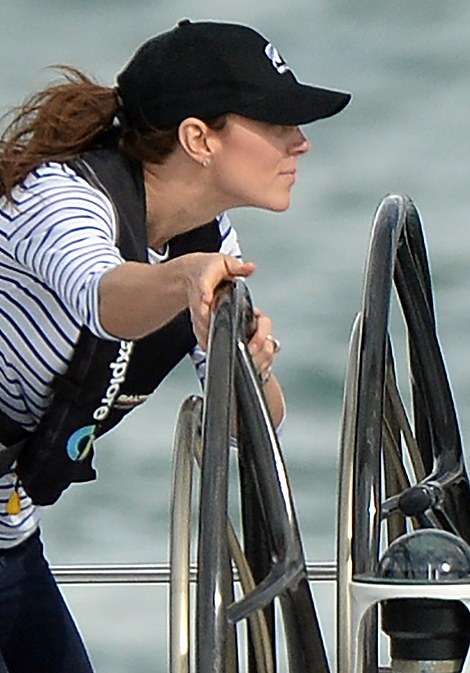 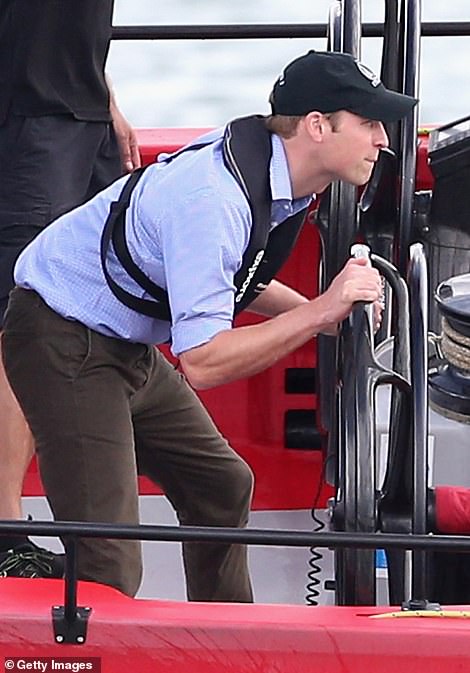 Ahoy there, captain Kate! Wearing nautical stripes, Kate has the edge (at least in the fashion stakes) as she and William helm rival yachts for a race around Auckland Harbour, while visiting New Zealand, in 2014. It’s all a friendly affair, but ponytailed Kate’s look of intensity, standing at the wheel of an 80ft America’s Cup sailing vessel, says this is a race she wants to win. She can’t resist a cheeky victory salute as she sails past her husband, and back to harbour 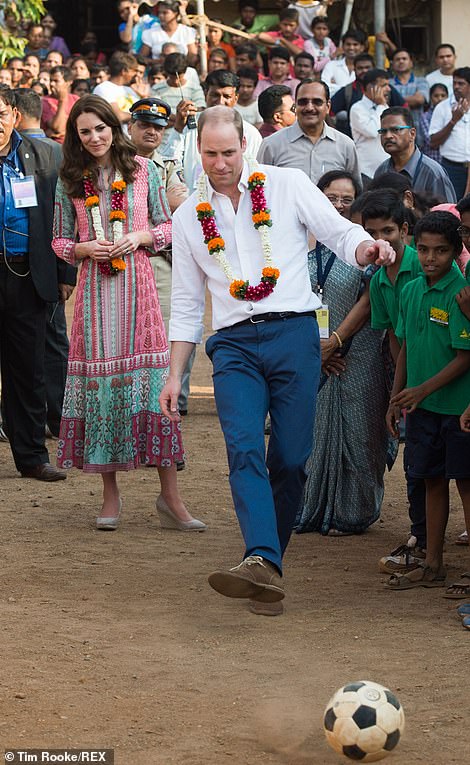 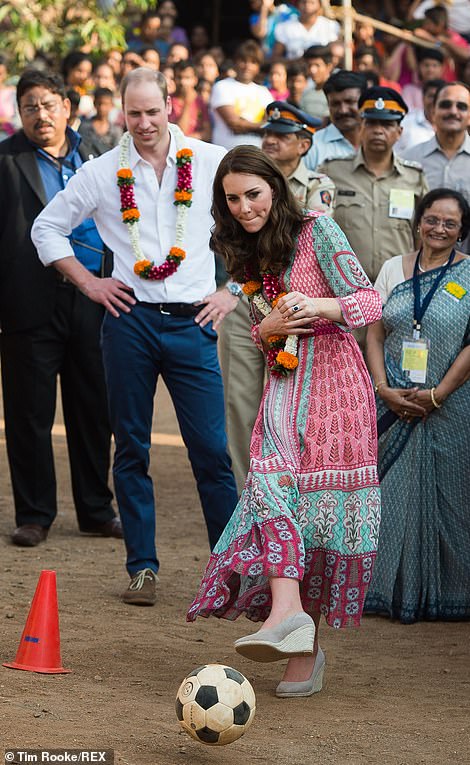 Putting the boot in: Eyes fixed on the ball, biting her lip in concentration, Kate was an enthusiastic participant when asked to show off her footballing skills during a visit to Mumbai, in 2016. Hands on hips, is that a smirk on William’s face as he watches his wife’s efforts, in a pair of towering wedge heels? On the same visit, meeting children being helped by three charities, the pair faced cricketing legend Sachin Tendulkar, both impressing the sportsman (even if they were both caught out)

Kate takes a bow:  A pair of heels and a floor-length wrap-skirt is not, perhaps, the most suitable attire for an archery showdown. But Kate did so with aplomb when invited to try the national sport of Bhutan, during a visit in 2016. The Duchess burst into fits of giggles as her shot only travelled about 20 yards, landing no where near the target but falling instead near the watching press pack. Her suited husband didn’t fare much better, his arrow overshot and headed for the road. Thank goodness he didn’t have any of the resident cheerleaders directing their songs at him (they are known for singing obscenities to put off opponents) 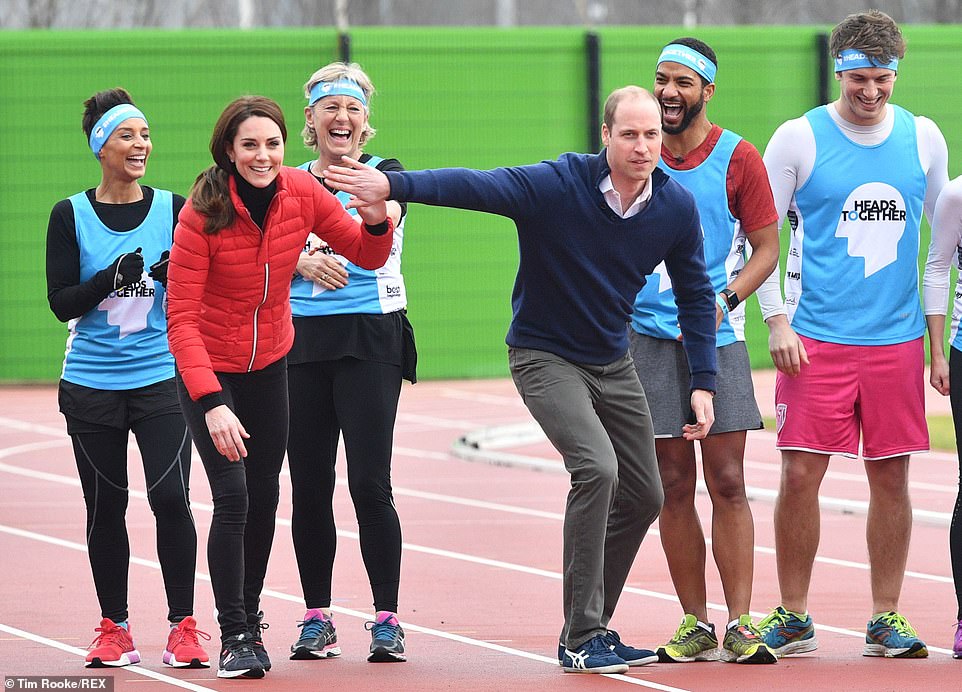 Keep up, Kate! A bit of competitive banter at the starting line, as William and Kate line up when joining a London Marathon training session in 2017. Kate, in her New Balance trainers and black skinny jeans, arguably looked the sportier of the pair at the event to promote their mental health charity, Heads Together. But in the end, it was William’s younger brother Prince Harry, who romped to victory, with William second, closely followed by Kate

Jolly hockey sticks: On the first day of their royal tour of Sweden and Norway, in 2018, competition was brewing. The couple took part in a hockey penalty shootout at an outdoor ice skating venue in Stockholm. They were each given three attempts to score goals, with ex-school hockey captain Kate in high spirits. Despite expectations, it was William who won 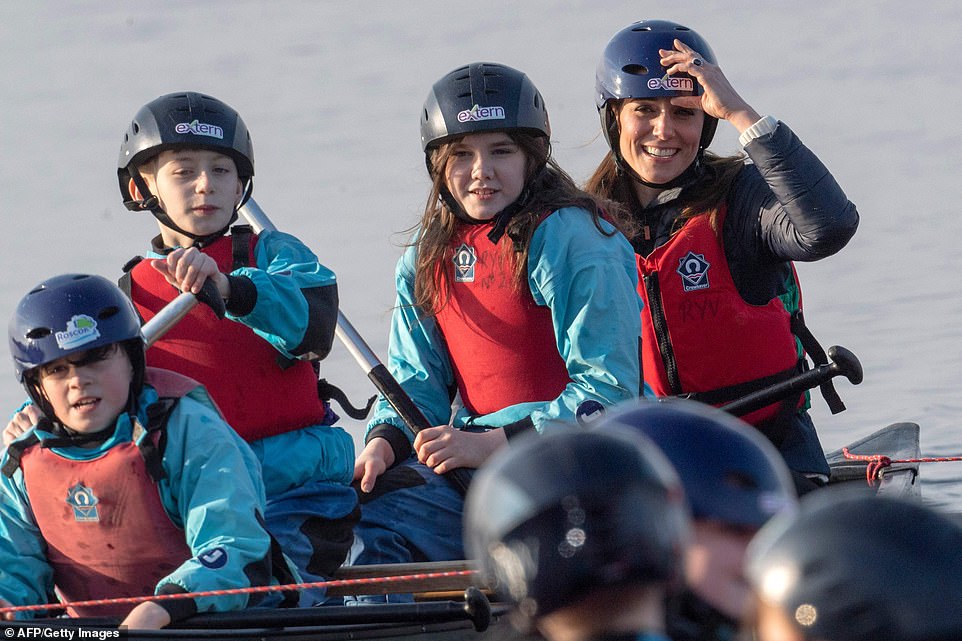 Canoe catch me? On a visit to Northern Ireland in February 2019, Kate and William enjoyed a light-hearted race on the water 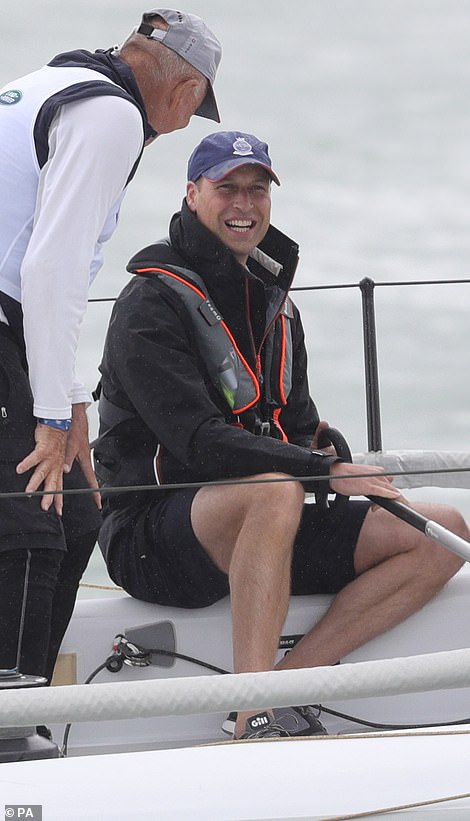 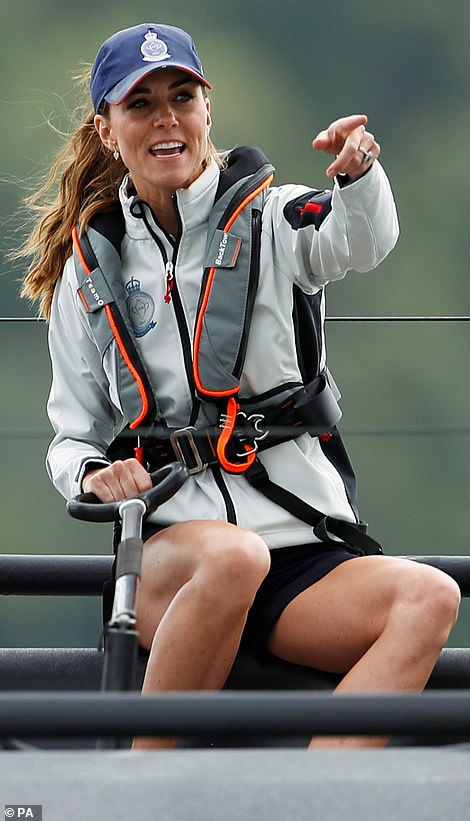 Winning streak! The last time the Duke and Duchess of Cambridge had a sailing race was the King’s Cup charity regatta off the Isle of Wight in 2019. William sailed to victory and Kate’s boat was disqualified 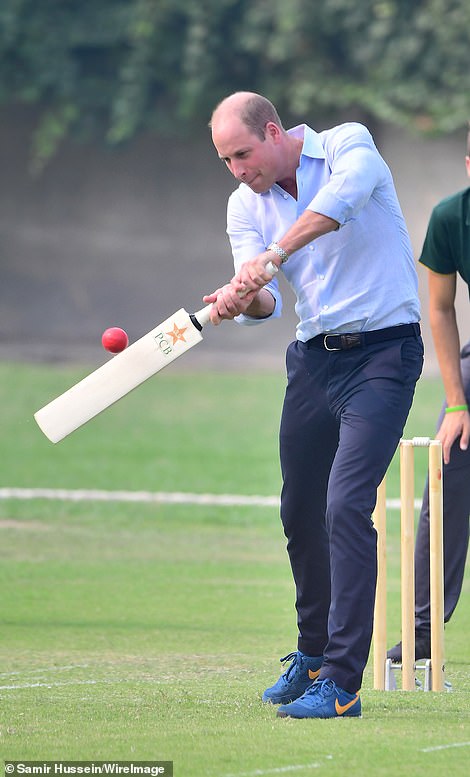 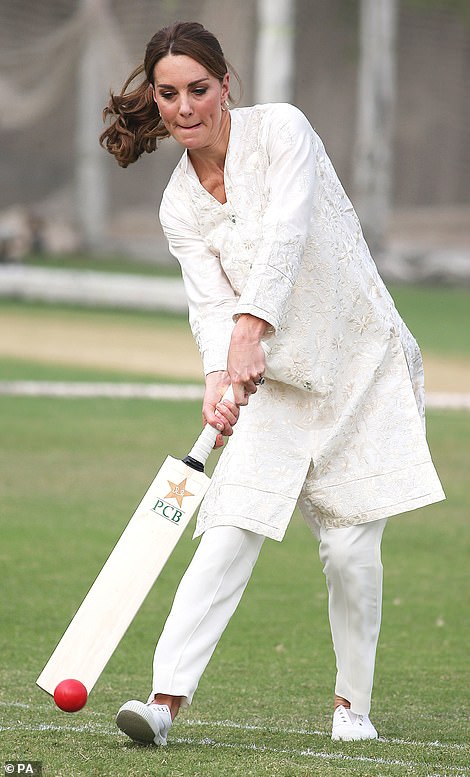 HOWZAT! During a five-day tour of Pakistan in 2019, it was only a matter of time before the sporting rivals took the chance to face off in the country’s national sport: cricket. Kate displayed her own glamorous take on cricketing whites, in a cream shalwar kameez – a traditional outfit of long tunic and trousers, with a sensible pair of white pumps, while William slipped a pair of Nike trainers on with his light blue short and navy trousers. There were cheers as the duke hit a six, while Kate was caught out twice after half a dozen balls 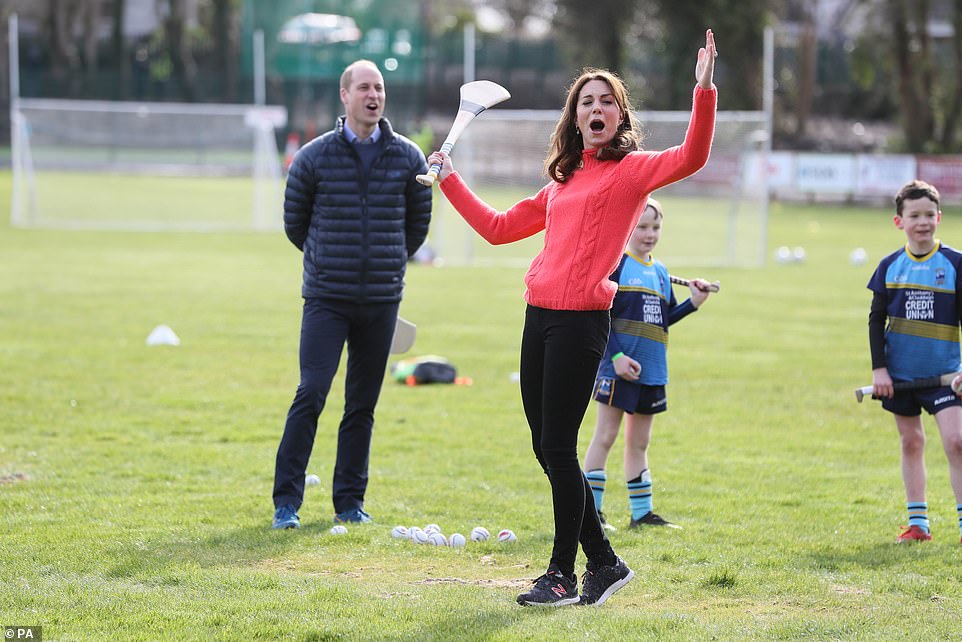 Oh, no! The Duke and Duchess of Cambridge try out hurling during a visit to a local Gaelic Athletic Association during their visit to Ireland in March 2020. There was no set scoring… although Kate looks disappointed with her attempt in this photo 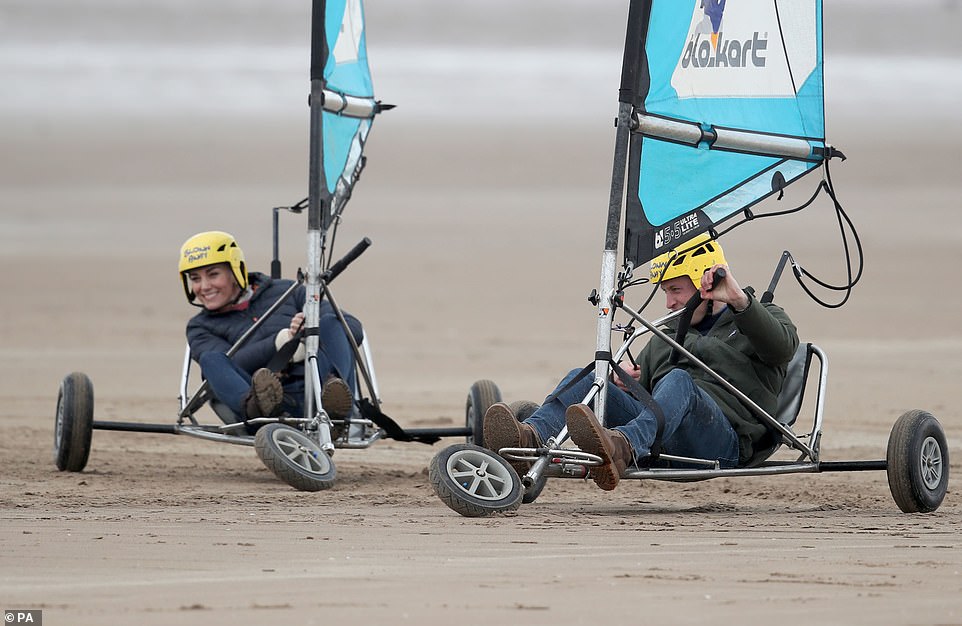 Catch Kate if you can! Competitive Kate Middleton was in her element as she and Prince William went head-to-head in a land yacht race in St Andrews in May 2021. The Duchess of Cambridge beamed as she steered the wind-powered go-kart down West Sands Beach – just a short drive from the university where she and William met as students 20 years ago