HollywoodLife spoke EXCLUSIVELY with Bianca Lawson about how Darla’s ‘overcoming and adjusting’ to a changing world in ‘Queen Sugar’ season 5, as well as Darla and Ralph Angel’s future.

After nearly 2 years away, the hit OWN series Queen Sugar is back with its most emotional season yet starting Feb. 16. HollywoodLife spoke EXCLUSIVELY with Bianca Lawson, who plays Darla, about what lies ahead for the complex character in the fifth season. After many struggles, Darla is finally entering a “really great period” in her life. Life won’t be “perfect” for her, but “the sun is coming out” for Darla.

Season 5 will tackle many of the most important issues facing our world right now: the COVID-19 pandemic, racial injustice, and more. Bianca noted that it will be an adjustment for everyone as they find a “new normal.” Ralph Angel and Darla will also be exploring what it means to “truly commit” to each other as they step into a new chapter of their lives together with Blue. Read our full Q&A below: 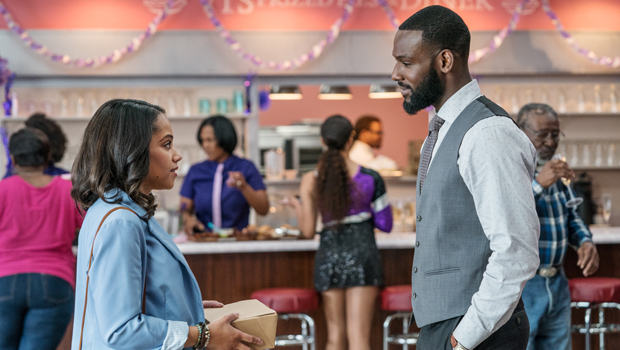 Darla experienced so much last season. She relapsed and opened up about being sexually assaulted. By the end of the season, it seemed like there was a light at the end of the tunnel for her. When the show picks up in season 5, how is she doing?
Bianca Lawson: I think the sun is coming out for Darla. I think what’s really fantastic is they didn’t do this sort of fairy tale thing or she’s suddenly better again, but they show the real ups and downs of trying to stay sober. We’re also dealing with life hitting you constantly, which I think is a reality for a lot of people that are trying to heal and get back on their feet and overcome some really huge obstacles. When this new season picks up, she’s in a really, really great place, but what’s fantastic about this season is they rewrote the whole season to reflect what’s really happening right now in terms of COVID, the protests, BLM, George Floyd, and what it looks like to be quarantined as all of these things are happening in the world. Also, homeschooling while in quarantine and how your life gets really disrupted. It’s a new normal, and they are trying to adjust to that. A lot of people are losing their jobs because of it. It’s not like everything’s super perfect in her world, but she’s overcoming and adjusting. Luckily, she has this wonderful support system in Ralph Angel, and she is in a really great place as a mother and navigating all of that. So it’s very much a light at the end of the tunnel. But life happens, as it always does. What we plan and what our expectations are going to be… the world happens and suddenly disrupts all of that, and then we have to reassess and move through that. So that’s really where she’s at. Within all of that change and ups and downs, she’s still trying to keep moving forward in terms of her life, in terms of her job, in terms of being a mother, and maintaining this relationship that has had its ups and downs. But I think that this is going to be a really great period for her after all darkness and that hovering shadow in the background of her life.

As we all know, the COVID-19 pandemic has impacted everyone differently. We’ve all had to make changes in our lives. With Darla, how would you say she deals with pandemic and the isolation factor of quarantining both internally and externally?
Bianca Lawson: I think that she’s dealing with it far better than I think some of the other characters. I know just in my life, some people really thrived during the pandemic because it forced them to slow down. It really shines a light on all of the things that we take for granted now suddenly seem like a luxury. The people and the connections and the community, a lot of people don’t have that. A lot of people were very much alone and incredibly isolated. I think there’s been a lot of mental health issues because of that. A lot of depression, a lot of anxiety, a lot of people that have had their addictions spiral as a result of that extreme isolation. But I think that it’s not going to be perfect for her. She’s going to have some losses as a result. I think having a Black son while witnessing all of these things that are happening in terms of these murders of Black men and Black women, it’s going to be a process for her to manage that. It’s an emotional season, but I think in a different way than it has been for her because now it’s not just her own personal struggles haunting her, but what the world is going through right now, and how that is impacting her and impacting her family. I think it’s very much ups and downs like a lot of people, but different kinds of ups and downs.

There’s that one scene in the trailer where Ralph Angel tells Blue about the realities he’s going to be facing as a Black man, and Darla is right there with them. What was it like filming such an important and emotional moment for those characters? This is a conversation that many Black families are having every single day.
Bianca Lawson: For me, with things like that I try to go into it and not plan because you never know, right? In real life, you never know how you’re going to process that and how you’re going to react. There were people on set who were crying because this is very much a reality for them as well and having these kinds of talks with their children. I think in those kinds of scenes you just try to be as present as possible. Ethan [Hutchison] and Kofi [Siriboe] are so wonderful to work with because they’re so in it that I don’t really feel like I have to act. I just have to be with them and experience it as though I’m experiencing what they’re truly feeling and emoting and going through. The director of that episode, Cierra Glaude, is wonderful. She pitched a great story. In the early seasons, she was a PA, and now is directing three episodes this season. She was wonderful. She literally just came and said to me right before we shot the scene, “Ralph Angel and Blue, these are your Black boys. What they must be going through and facing what Ralph Angel has gone through?” And now having to kind of explain to Blue, who’s such an innocent, what these realities are that he’s going to have to be facing in his life. How do you navigate that conversation? What is appropriate to tell him, but you also don’t want to lie? You want to be very honest and transparent. But he’s a child. So it’s that kind of delicate balance of not wanting to scare him but wanting to let him understand the truth of what he’s going to be possibly experiencing as he’s growing up. It was a very emotional scene day for everyone just because it was really going on in real life.

Ralph Angel and Darla have had their ups and downs. There was that scene at the end of last season when Ralph Angel tells Darla that she’s braver and more beautiful than she’s ever been. He says that he sees all of her. It was such a stunning monologue. Going into season 5, where does their relationship go from here?
Bianca Lawson: I would say this season is about what it means to commit, to truly commit. I think it’s very easy to be there for each other when things are good, right? But how do people show up when things are hard? I think he has been there for her during her struggles. She’s been there for him during his struggles. I think that when you have that kind of history and just have gone through some real sh*t with each other, there’s real love there. The hard times are awful, and no one would wish them on anybody, but if you can survive it, I think you create a bond and the loyalty and the love that comes much deeper than if everything’s just perfect and sort of surface. I think they’re entering into a new territory with each other, and one that we haven’t seen before. 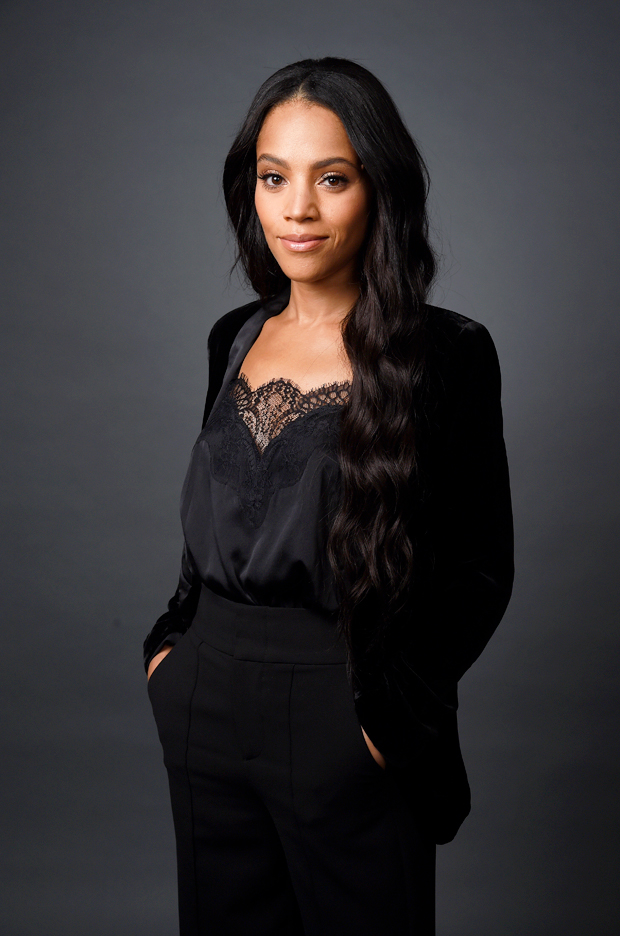 Any chance they could expand their family? Is that a discussion at all?
Bianca Lawson: You never know. You never know. I mean, I think that would be a really beautiful thing.

Darla is such an intricate female character on television, and the show has always been dedicating to having female directors. Do you think having that support behind the camera has helped you portray this character and really flesh her out?
Bianca Lawson: Absolutely. I’m a big believer in energy, so I feel like when there’s good energy around you, and you feel like you’re in a safe container, it makes you a bit more fearless to try things and go places. It’s not always easy, right? I think it lends itself to being very vulnerable as an artist. It lends itself to experimenting because you can go in with an idea and something happens in the scene and suddenly sparks something, and you go down a completely new path than you even saw on the page. If you know that people are really rooting for you and they really are invested in the character, I think you create your best art when you feel free. The people around you, the directors, the DP, the cameraman, everyone is just kind of creating this wonderful space for you to just expose your soul. It’s not so much that it needs to be perfect, you know? So having that freedom to kind of make a mess and maybe a choice that’s not necessarily quote-unquote the right one, but it could be so much more interesting. Being able to kind of play in that way I think absolutely lends itself to being able to make it a bit more nuanced and complex and raw than maybe you would have the space to do in a different environment.

Over the past 4 seasons, we’ve seen so many layers of Darla. Is there any aspect of her that you still want to explore?
Bianca Lawson: I think it’s already going to happen. I think the progression of her journey this season is already kind of scratching that surface and entering into that. So if I tell you, it kind of gives that away. We’re about to go and start shooting season 6 in a couple of weeks. I haven’t seen the scripts for that but based on how season 5 ends, I’m really, really interested to see this new chapter of her life and what that brings out in her.