The risks feral pigs pose to marine turtles and their nests are so high the federal government is funding Indigenous rangers and community groups to cull the damaging predators, and even install cages on beaches to protect the eggs.

Environment Minister Sussan Ley said Indigenous rangers on Cape York have observed up to 100 per cent of the turtle nests in some areas "can be preyed on, the very night that they are laid". 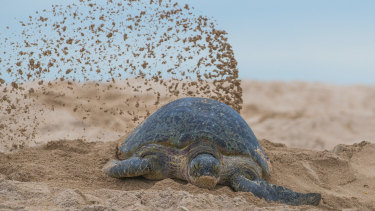 A $28 million funding program will be rolled out with Indigenous rangers, community groups to cull and control pigs and foxes as well as relocating turtle nests.

“Working with Indigenous Land and Sea Rangers and local conservation groups, strategies such as trapping and culling predators, deploying fox-detector dogs, and the use of cages to cover clutches of eggs will be employed at key rookeries across Queensland," Ms Ley said.

Marine turtles nest on beaches along the Queensland coast on nights from December to February. Six of the world’s seven species of marine turtle live in Queensland. The loggerhead, hawksbill, olive ridley, and leatherback turtles are listed as endangered, and the green and flatback turtles are vulnerable.

Pigs are "by far the most widespread and abundant" feral predators in the region and they pose "significant and continual risk" to marine turtles, the Far North Queensland Regional Organisation of Councils told a recent Senate inquiry. 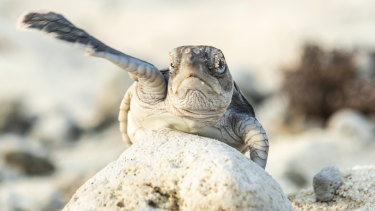 Feral pigs are wreaking havoc on turtles in northern Queensland.

Landcare groups will also be funded to restore sensitive vegetation along the reef coastline to prevent erosion and preserve nesting sites. Fish passages will be installed in the Burdekin River, a major waterway south of Townsville, to encourage fish breeding.

“As well as protecting the turtles, rangers report a number of other benefits from decreased pig numbers, including the regrowth of sensitive vegetation communities and improvements in the health of freshwater lagoon systems," Ms Ley said.

“Groups in the Burdekin will install fish ladders in important waterways to help reconnect species like barramundi to the freshwater systems they desperately need to complete their life cycle."

Australia's domestic tourism industry is in freefall due to COVID travel restrictions. It is forecast to cop a $55 billion hit over the next financial year, particularly regions like Far North Queensland where the economy is fuelled by international visitors.

Special envoy for the Great Barrier Reef Warren Entsch said turtles are "invaluable to our tourism industry as one of our most iconic animals”. Billie Eilish Google Searches Herself All the Time, But She Stays Away From Twitter — 'That Is a No Go, That S*** Is Mean'
We and our partners use cookies on this site to improve our service, perform analytics, personalize advertising, measure advertising performance, and remember website preferences.Ok