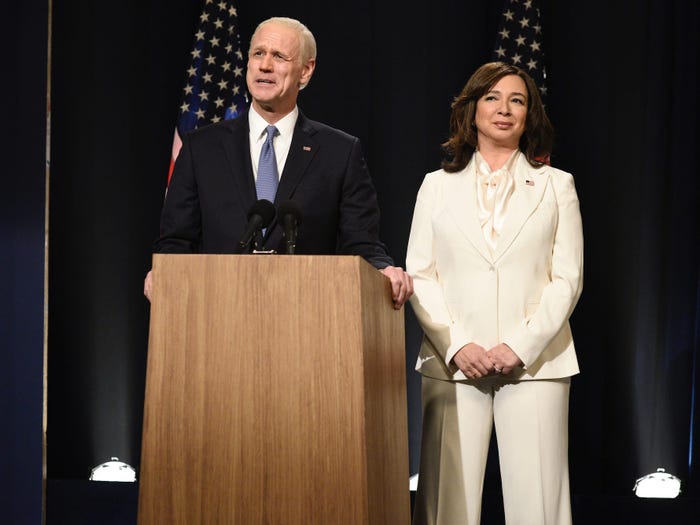 Maya Rudolph reprised her role as Kamala Harris on "Saturday Night Live" over the weekend — and her outfit looked almost identical to what the vice president-elect wore for her victory speech just three hours earlier.

The replica pantsuit, complete with a loosely-tied bow and American flag pin, was created by the "Saturday Night Live" costume department, as reported by PopSugar, which spoke with wardrobe supervisor Dale Richards and costume designer Tom Broecker.

"Every store in the city had been closed for hours," Broecker told the publication. "There was no way to shop this look anywhere, except in our back rooms."

The team started by gathering screenshots of Harris as she addressed the nation from Wilmington, Delaware.

From there, they created her blouse from cream charmeuse fabric, and altered an old double-breasted blazer — which was originally purchased for another actress to play Melania Trump — into one that matched the jacket worn by Harris. Broecker and Richards added that they had no contact with Harris' team, and therefore had no way of knowing what she would wear.

"It would require an incredible amount of work to recut a double-breasted suit into a single-breasted suit, but I work with the most incredible tailors in the world," Broecker told PopSugar. "They put the jacket on Maya's mannequin form in the office and went to work, just like in the movie 'Cinderella.'"

"Eighty minutes later, and four tailors exhausted, Maya did a fitting," he said, adding that he noticed Rudolph was missing the American flag pin on her lapel as she left her dressing room.

"Her dresser went running into the wardrobe room to get her flag pin," Broecker told PopSugar. "I will say this: nowhere else in the world could this happen."

The white suit was symbolic for Harris, as it featured nods to feminism and women's suffrage

Carolina Herrera designed the two-piece ensemble, according to Vogue. As Insider's Darcy Schild reported, the all-white color scheme was likely a nod to suffragettes, who used the color to symbolize the group's purpose and purity.

More recently, Democratic congresswomen "have chosen to wear all-white outfits as a nod to the suffragists on a variety of occasions, most notably while attending President Donald Trump's State of the Union addresses," as Schild wrote.

Harris also wore a loosely-tied bow around her neck — a style that's often referred to as a "pussy bow" or "pussycat bow." The accessory is known for its ties to feminism, and has come back into style with the help of politicians in recent years.