A man has put his former fiancee’s wedding and engagement rings up for sale – and joked the metal is ‘tarnished like his faith in relationships.’

Ben Simpson, who lives near Neath in Wales, put the ring set from H.M. Samuels ‘Forever Diamond’ range on sale on Facebook Marketplace – before noting it is ‘ironically named.’

Selling the rings for £500, he explained that only the engagement ring had ever been worn, and quipped its appeal was slightly tainted – as was his faith in relationships.

In the advert, Ben penned: ‘The ironically labelled “Forever Diamond” Paid £1000 for it 4 four years ago. It didn’t last forever but the rings did.’ 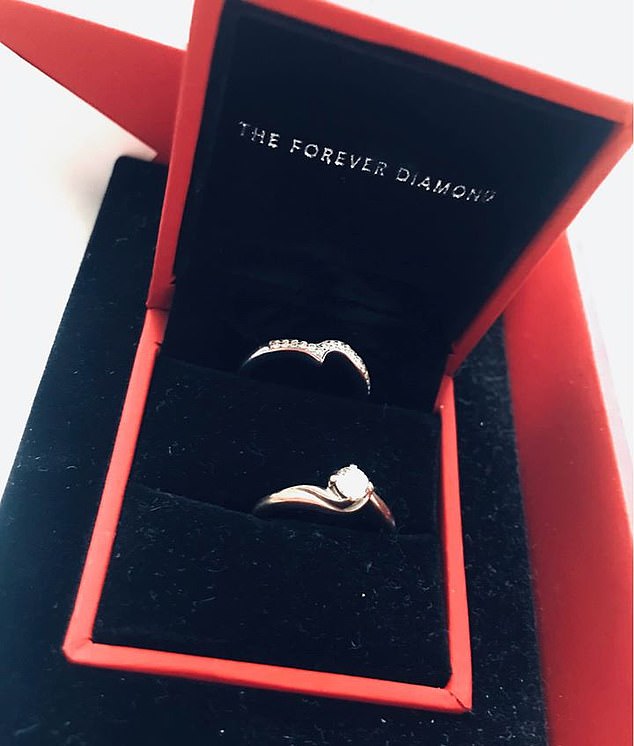 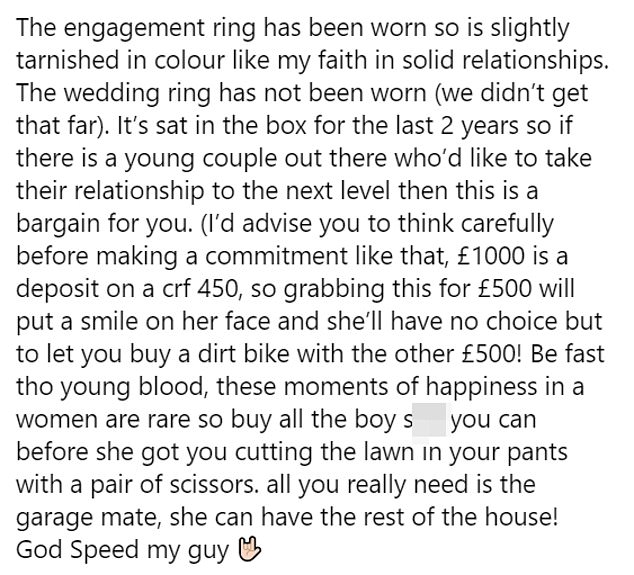 He continued: ‘It’s an unwanted gift obviously. It has two rings… engagement and wedding band that connect together when you say the big “I Do”.

‘It’s sat in the box for the last 2 years so if there is a young couple out there who’d like to take their relationship to the next level then this is a bargain for you.’

The seller then went on to turn the advert into a message of warning for other men thinking about taking the leap and proposing to their significant others.

‘I’d advise you to think carefully before making a commitment like that, £1000 is a deposit on a crf 450, so grabbing this for £500 will put a smile on her face and she’ll have no choice but to let you buy a dirt bike with the other £500,’ he wrote. 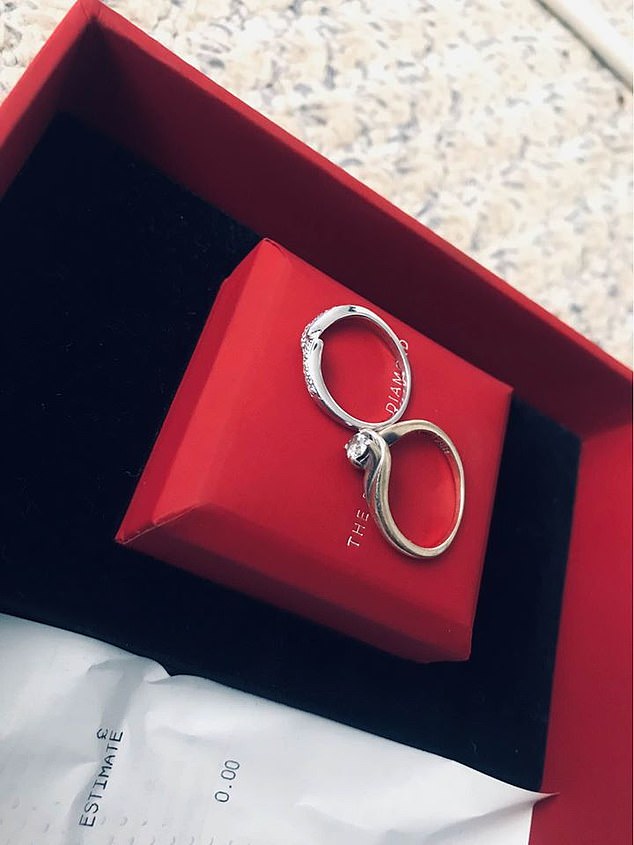 Ben put the ‘forever diamond wedding and engagement ring’ set on sale for £500, noting it was ‘ironically labelled’ (pictured)

‘Be fast tho young blood, these moments of happiness in a women are rare so buy all the boy s*** you can before she got you cutting the lawn in your pants with a pair of scissors.’

‘All you really need is the garage mate, she can have the rest of the house! God Speed my guy.’

The set, sold by jeweller H. Samuel, consists of two rings that can clipped together after the wedding has taken place – and they come in a crimson red ring box with a certification for the diamond.

The engagement ring is a gold ring coming up to a twist and mounted with a 0.32 carat diamond. On the H Samuels website, one can see the inside of the rings are usually engraved with the word ‘forever.’

The wedding band, in white gold, is made to fit the engagement ring exactly.

And many who stumbled upon the advert were left amused at Ben’s message – while others expressed their sympathy.

‘I’m Deaddddddddddd, this has made my morning,’ wrote one, while a second penned: ‘I’m sorry that you have to sell these and I hope they go to someone who needs them. But honestly it made my day reading your post. Onwards and upwards.’ 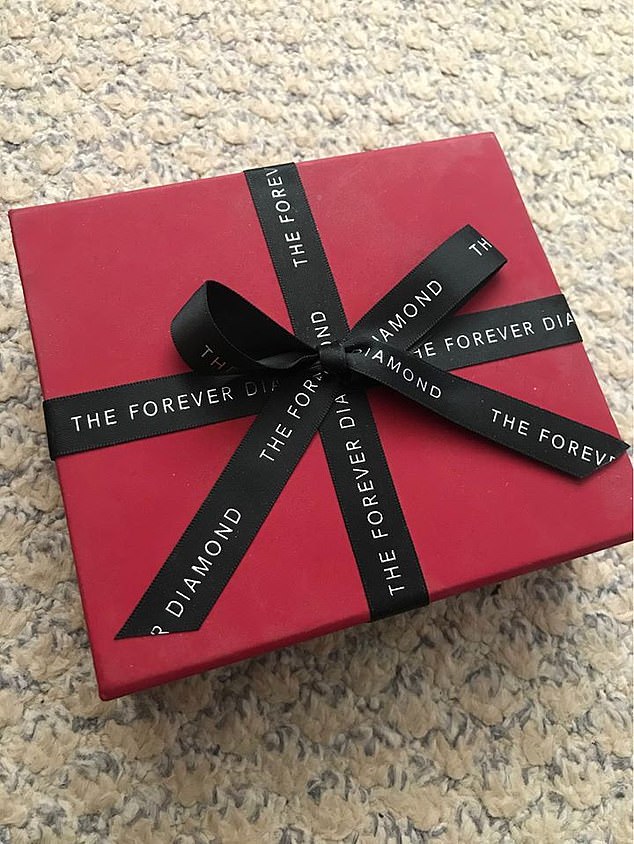 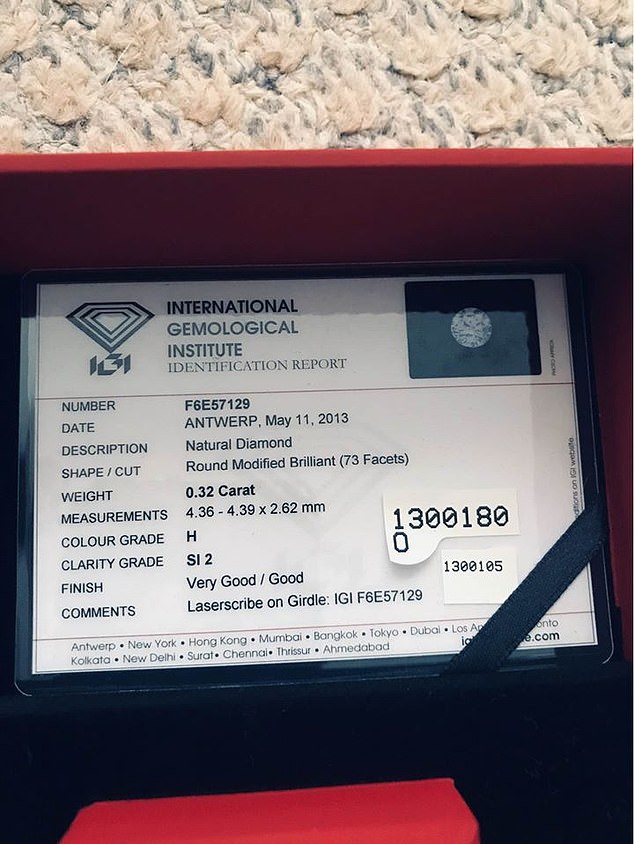 The pieces of jewellery were accompanied by an identification report stating the diamond was 0.32 carat

Many who came across the advert were left amused by the comments, with one adding it’s the ‘funniest thing I’ve read in ages’ (pictured)