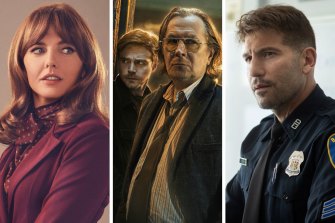 Top TV (from left): Minx, Slow Horses and We Own This City.Credit:Ramona Rosales, Apple TV+, HBO/Binge

When it comes to watching television, we’re no longer spoilt for choice, we’re simply overwhelmed. There are more options now than we’ve ever had in the history of the medium. It’s peak TV. But the consolation is that you haven’t missed anything.

Streaming services and digital channels mean no good show gets left behind. So please consider this report card of the year’s best new shows to date your winter viewing list – when it goes cold, we catch up.

The writer of Sicario made a western – no prizes for guessing this wagon-train saga is a brutal depiction of life in the (extremely) wild west. Sumptuously shot, with magic-hour lighting and extensive period detail, Taylor Sheridan’s vision of American exceptionalism is pessimistic and mostly shorn of paeans to frontier spirit; many people die, few others care. It’s obviously grim, yet also rhapsodic, with a female teenage narrator in Isabel May’s Elsa Dutton, and a mighty performance by Sam Elliott and his moustache as the expedition’s unyielding leader.

Set in a Philadelphia primary school where the children and staff learn some pertinent lessons, this is the next great workplace mockumentary and a legit successor to The Office. Creator and star Quinta Brunson, who plays naively optimistic new grade two teacher Janine Teagues, has fashioned a PG-rated family comedy that’s gleefully funny, dedicated to the struggles of teachers and full of richly sketched characters who keep revealing intriguing new angles. Principal and wildly inappropriate influencer Ava Coleman (Janelle James) steals every scene she’s in.

As We See It (Amazon Prime)

The depiction of autism on scripted television has thankfully moved past Rain Man-style guest slots, with a broader understanding of being neurodivergent and actors on the autism spectrum increasingly being cast. It’s not perfect, but this empathetic comedy-drama from Friday Night Lights creator Jason Katims about three 20-something housemates with autism gives them genuine struggles, real wants and typically flawed conditions. Leads Sue Ann Pien, Rick Glassman and Albert Rutecki are all exceptional.

Amanda Seyfried gives one of the performances of 2022 in this real-life Silicon Valley drama, inhabiting the mannerisms and increasingly frayed morality of Elizabeth Holmes, whose medical start-up Theranos went from celebrated, multibillion-dollar company to scandal and criminal charges. With spiky humour as punctuation, creator Elizabeth Meriwether (New Girl) has created a damning portrait of personal and corporate failure. This limited series is highly watchable and deeply thoughtful; with each episode your understanding of Holmes and her falsehoods grows more complex.

Australian comedian and comic actor Claudia O’Doherty has had attention-grabbing supporting roles since decamping for London and then Los Angeles (see Netflix’s Love for evidence), but she’s now got her breakthrough role in this comedy about the dystopian extremes of the American dream. O’Doherty’s Jillian and sitcom veteran Craig Robinson’s Craig are Florida residents looking for their big business break – somehow it might be hunting an invasive species of pythons for the official bounty. The show is silly but also telling, and as a dangerously blithe spirit, O’Doherty is a force of nature.

Life on the Outside (SBS On Demand)

This three-part documentary series follows a handful of just-released inmates from NSW jails who spend their first 100 days out with a stranger and their family in a bid to have secure housing and a clean break from some of the circumstances that make re-offending likely. The show doesn’t have the answers, but the question it asks of the incarceration system and the people involved are genuine and necessary, and the intimacy of the storytelling makes worrying statistics into real people. It’s a revelation.

It’s been a banner year for doggo TV, thanks to shows such as The Dog House, but the best of the litter was this four-part local documentary about a group of kelpie pups dispatched to trainers and their farms across Australia to learn the cattle dog trade. Full of likeable personalities on either four or two legs, the show was a primer on canine instinct and the modern needs of a very traditional job. A shout-out to the cinematography, which put you amidst cattle hooves and stockyards to great effect.

I’m calling it: a Japanese reality show where toddlers leave the family nest to run errands is the best television surprise of the year. Old Enough! is an institution in Japan, where it has aired for more than three decades, but thanks to Netflix picking it up internationally, we can now enjoy the wholesome adventures and genuine tension of four-year-olds trying to remember a shopping order and the way home. It’s a genius concept and a subtle commentary on the importance of community cohesion. It really is a tonic.

Extra relevant after the upheaval heralded by the federal election, this brisk adolescent comedy about the conscientious teenage daughter, Catalina Parkes Perez (Cassandra Helmot), of a newly installed female prime minister, is a buoyant leaving-The-Lodge adventure that illustrates our governing systems and how party politics and activism can engage with each other. Made for tweens, it has enough wit and valid observations for the target audience and their parents alike.

The Responder (SBS On Demand)

Fans of Martin Freeman, be warned: there is no sign of the British actor’s deft comic skills in this unrelenting police drama. Playing a first-response officer working the demanding night shift in the hardest corners – physically and emotionally – of Liverpool, Freeman is masterful. Skirting corruption and trying to stave off a mental breakdown, his Chris Carson carries the impossible contradictions of policing. If you’re ready for the challenge, this series is compelling.

I watched this American science-fiction thriller in February and there is barely a day since I haven’t reflected on it. The best show of 2022 to date is immense in the themes and forms it tackles, unfolding at a company where certain staff have had their identities halved so that home and office are two different existences that the other has no idea about. Adam Scott is the dutiful employee who tries to bridge the gap, and through all the mind-bending concepts and deeply eccentric twists, a powerful humanity burns through.

Welcome back, Gary Oldman. The definitive British actor of his generation is 64 years old and has played too many Hollywood villains, but he absolutely aces this acerbic British espionage thriller as a cynical MI5 veteran recalled from the sidelines. As much about personal foibles as national security, the series is a ticking clock drama illuminated by black humour and desperate hopefulness. Slow Horses gives the genre a new lens.

Arriving with zero big-name stars and few expectations, this bittersweet comedy about the difficulties of trying to grasp a second chance in life aired without fuss in January and February. But if you found it – as I thankfully did – then you discovered an unassuming gem, set in a Kansas university town where a woman, Sam (Bridget Everett), who has been hiding from her various relationships is dragged back by a queer singing circle that reignites her considerable voice. It’s a show of everyday interactions, sometimes as simple as two friends making each other laugh, but ultimately, it’s tender and illuminating.

We Own This City (Binge)

HBO’s The Wire remains one of television drama’s true peaks, a kaleidoscopic vision of the many tribes – criminal, police, political, and more – that held sway in the city of Baltimore. The show’s creator, David Simon, returned to his hometown for this scathing, inspired limited series, which dissects a real-life police corruption scandal that provided frightening insight into how just broken a supposedly functional system can be. Jon Bernthal will never have a role as evocative and detailed as crooked cop Wayne Jenkins, and he makes the very most of it.

She-Hulk: Attorney at Law (Disney+, August 17): Ally McBeal meets the Avengers? The great Tatiana Maslany (Orphan Black) plays a lawyer in this Marvel series who can go full Hulk in the courtroom or the bedroom. Hopefully the show, which features Mark Ruffalo’s Hulk, leans into the satiric possibilities.

House of the Dragon (Foxtel/Binge, August 22): If you’ve put the many disappointments of Game of Thrones′ concluding season behind you, this prequel is promising a vast increase in feuding silver-haired House Targaryen nobles and the dragons they ride.

1899 (Netflix, TBC): From the creators of Dark, Netflix’s brain-bending German time-travel mystery, comes what appears to be an equally grim drama about unknowable risk, which is set on a ship taking European immigrants to New York that is drenched in supernatural terror.

* Stan is owned by Nine, the owner of this masthead.