‘The forecasts were out’: Triple-zero call service underestimated Omicron wave

Victoria’s triple-zero call service was blindsided by the Omicron emergency after wrongly assuming that COVID-19 infections would keep falling after the Delta wave.

A two-page document released to The Age after a freedom-of-information request shows the Emergency Services Telecommunications Authority (ESTA) had to upgrade its expectations at the last minute to handle record call numbers after failing to prepare for the highly contagious variant. 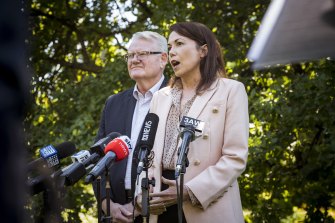 As The Age previously reported, people had died in the preceding months waiting for the understaffed triple-zero service to answer their calls.

ESTA forecast demand for the month of January in November, basing its preparations on the belief COVID-19 infections were falling at the end of the Delta wave. The forecast – designed to roster call-takers and prepare for a spike in demand – was refined in early December.

However, it wasn’t until January 2 that the agency recalculated demand to properly reflect the Omicron wave, which was already surging.

Omicron was designated a variant of concern on November 26 and found in Victoria on December 6. By January 2, authorities were preparing for 25,000 daily cases after recording 7172 new COVID-19 infections that day.

Twelve people died while on hold to triple-zero in the four months from October to the end of January. At least five people died in January.

The “January call forecast summary” released to The Age shows ESTA was unprepared for the spike in demand in what became its second-busiest month on record, with about 3000 calls a day.

“… forecasting was initially completed for January during November (refined early December) when Delta cases were steadily dropping,” the document says.

“Increased public capacity and social mixing, with the admixture of Omicron variant had asserted themselves by Christmas. The New Year weekend, traditionally a high-demand period, combined with heat health alerts and escalating transmission rates began January with record volumes.

“A forecast recut – increasing the expected number of calls – was added on 2/1 [January 2].”

Emergency Services Minister Jaclyn Symes said in March there was an unprecedented increase in calls that ESTA did not foresee.

“I acknowledge that we have unacceptable delays, particularly during January, when we had calls of up to 4000 a day, which was well beyond forecast demand,” Symes said in March.

“I don’t think that the modelling anticipated the impact that Omicron had on the community … the modelling was out. The forecasts were out.”

Victorian Ambulance Union secretary Danny Hill, who represents ambulance call-takers, said there were not enough staff in the first place and the agency had failed to prepare for COVID-19 peaks throughout the pandemic.

“We didn’t see that work being done at ESTA until well into the end of 2021 … had they done that, they may have been able to put on more staff ahead of time, so that when things got really bad towards the end of 2021, we may have had enough staff there to be able to assist,” Hill said.

The union has been pushing for minimum staffing levels, rather than recruiting staff in bulk during a crisis.

The Andrews government last year committed to hiring 43 new staff, all of whom have begun work. The government provided funding for another 120 employees in March after revelations dying Victorians had waited up to 16 minutes to reach an operator. The agency has a five-second pick-up target.

Former police commissioner Graham Ashton has finalised his review of ESTA, which will be made public alongside the government response by the middle of the year.

Symes has previously said it was inevitable the agency would need to be restructured.

ESTA’s interim chief executive, Stephen Leane, appointed after the resignation of Marty Smyth, said in March callers should stay on the line to triple-zero if they experienced delays in an emergency. If it was not an emergency, Victorians should phone nurse-on-call or visit their GP.

Leane conceded the agency was struggling to retain staff and had been unprepared to handle significant demand during the Delta and Omicron waves.

Call waiting times improved in March, though pressure and staff furloughing owing to COVID-19 has continued, with ambulance demand increasing about a third since the beginning of the pandemic.

“The COVID-19 pandemic has placed unprecedented strain on systems around the world,” an ESTA spokeswoman said.

“No emergency response agency in the world has been immune to this, including ESTA and its call-takers.

“We continue to receive a high number of calls which before COVID-19 were unprecedented. This reflects the increased demand on emergency and health services worldwide.”

A Victorian government spokeswoman said the pandemic had strained every part of the health system and recruitments for more call-takers would ensure people calling triple-zero receive the help they need.

A spokeswoman for Ambulance Victoria said they were working with partner agencies to manage demand.

“Health systems around the country are under significant pressure due to the ongoing effects of the global pandemic.“