‘The front door will now be open’: Melbourne to accept flights from NZ

Melbourne will accept international flights from New Zealand from Monday, joining the trans-Tasman bubble three weeks after Victoria's unintentional inclusion became a flashpoint between the state and federal governments.

As Victoria marked seven successive days of zero COVID-19 cases on Friday, Premier Daniel Andrews revealed that he had written to Prime Minister Scott Morrison to advise him of the decision. 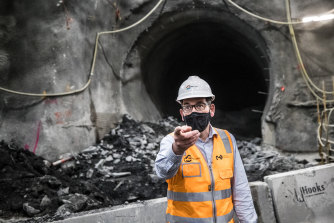 "Whilst we found ourselves kind of inadvertently in the New Zealand bubble – I'm not sure if bubbles have doors, but the front door will now be open," the Premier said.

"That is, direct flights into Tullamarine so that New Zealanders will be able to travel directly to Melbourne and throughout Victoria."

While Australians are currently not allowed to travel to New Zealand under the bubble arrangements, New Zealanders are not required to quarantine upon arrival in Australia because of low coronavirus case numbers across the Tasman.

Mr Andrews said he did not think "it'll be very difficult at all" for Mr Morrison to add Victoria to the trans-Tasman bubble and he expected flights to start arriving soon after Monday. 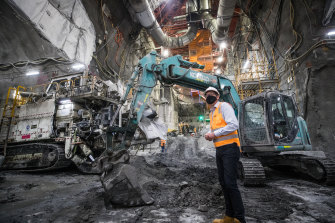 The Premier inside the future State Library Station, part of the Metro Tunnel project slated to open in 2025.Credit:Jason South

"I think Melbourne Airport will be very keen to have those flights land. There are some landing in Sydney now, there'll be a mix," the Premier said at a press conference held at the site of the future State Library Metro Tunnel train station.

"It might not happen on the 9th but that's when we're happy to have it happen. It'll be a matter for airlines and the airport to make the the kind of practical changes to give effect to that."

Victoria has in reality been receiving travellers from New Zealand since the travel bubble linking New Zealand with NSW and the Northern Territory began three weeks ago.

Up to 55 people arrived in Sydney from New Zealand and immediately boarded flights to Melbourne on October 17, sparking panic among Victorian authorities as they tracked down the travellers to advise them of the state's coronavirus guidelines. 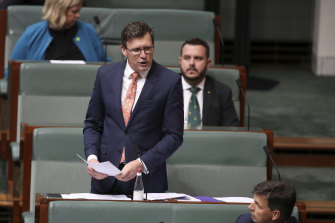 Their arrivals enraged Mr Andrews, who lambasted the federal government and acting Immigration Minister Alan Tudge for ignoring Victoria's request to not be part of the travel bubble and failing to inform local authorities of the travellers' details.

Mr Tudge responded by saying the Andrews government should not have been surprised because the "back door" route had been discussed by the nation's top health committee earlier that week, when Victoria's Chief Health Officer Brett Sutton was present. Professor Sutton responded by saying he did not attend the meeting.

The argument took place amid heightened scrutiny of Professor Sutton's evidence to the hotel quarantine inquiry, which had called an extraordinary hearing to receive more evidence the day before.

The hotels inquiry handed down its preliminary report on Friday, which offers a framework for Victoria to again receive international flights carrying Australian expats, with suggestions such as home quarantine for some and police on-site 24/7 at hotels.

Mr Andrews said his aim remained that more international arrivals be permitted before Christmas, the same time frame national cabinet has agreed on for Australia's state and territory borders to be lifted.

"The next logical step after [opening to New Zealand], once we've got that reboot of hotel quarantine … we'll be able to have flights landing in Melbourne again from right across the world," the Premier said on Friday.

With the NSW-Victoria border to open on November 23, Queensland Premier Annastacia Palaszczuk on Friday offered renewed hope of Victorians being let into Queensland in time for Christmas. 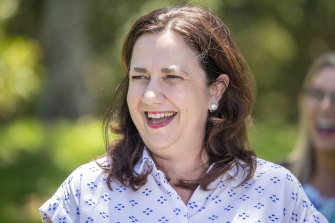 Queensland Premier Annastacia Palaszczuk said Victorians may be able to enter her state in December.Credit:Glenn Hunt

Western Australia will open to Victoria and other jurisdictions on November 14, while South Australian Premier Steven Marshall this week flagged opening his state's border to Victoria within a fortnight.

Tasmania's border will open to people travelling from NSW from Friday. Victorians could be permitted to travel to the state from December.