The unspeakable devastation of losing a pregnancy 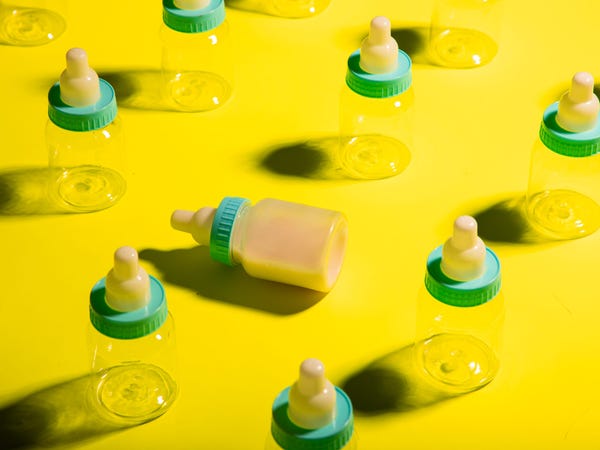 I sat in a hospital waiting room staring at the green patterned painting hanging on the wall in front of me. One hand gripped the other while my sneakers traced the old blue carpet. Doctors in scrubs, pregnant women, and hospital employees walked by me, immersed in their morning routine.

I wanted to leave — to run to the nearest elevator and escape — but I waited for my name to be called.

Moments later, the surgeon, wearing a purple Patagonia fleece and a low ponytail, greeted me and went over the details of the dilation and curettage procedure. It would be performed following a devastating loss: the miscarriage of my son.

The vivid memories of that day came rushing back recently, as news broke of Chrissy Teigen's pregnancy loss. As others shared their own stories of loss, I was reminded of my own grief, and of how unfathomable the days and months after it seemed. And I was reminded, too, of just how little it seemed to matter to the doctors around me.

Two days before I found myself in that waiting room, I received a phone call from a genetic counselor.

Our results indicated that our baby boy had Trisomy 13. Ninety percent of babies with this chromosomal abnormality do not live to be a year old. We scheduled an appointment the following morning for an ultrasound.

The ultrasound technician was bubbly when we arrived, confirming my name, my age and that I was twelve weeks pregnant. But shortly after she covered my belly in lubricating jelly, she began to move her tool faster, searching, unable to find an angle where our baby did not appear still on the screen.

The technician left quietly and a doctor I had never met before entered the room minutes later. "I'm sorry. Your baby has passed," she said. Without time to take that information in, she explained I could wait for the baby to exit my body naturally or schedule a D&C to "remove the tissue."

My husband Peter and I held each other and burst into tears the moment she left. Minutes later, the medical staff re-entered to schedule the D&C, and the doctor returned to ask us to leave. They needed the room for other patients.

When it was time to head back into the operating room, my husband was asked to leave. I clung to him until they wheeled me away.

The procedure started off relatively painlessly. The surgeon dilated my cervix, applied numbing medication, and explained each step aloud. She used suction to remove what she called "particles" from my body. When I first heard the suction, I winced, anticipating a physical blow.

Because of my positioning, I couldn't see the machine, so my imagination took over. I envisioned our baby being forcibly pulled from my body in pieces. I began to cry. The crying turned into sobs.

When the suction stopped, the surgeon pushed down on my lower abdomen. "We need to make sure all of the particles are removed," she said. A young nurse came over to hold my hand, but a stranger couldn't provide the comfort I needed.

The surgeon told me I could return to work in a day and could try for another baby in a month. I felt like a little girl being patted on the head before being shooed off to play. "And you should cancel all your prenatal appointments," she added. The unnecessary reminder felt like a jab.

I left the hospital bleeding and experienced painful headaches, cramps, soreness and back pain.

The less I understood about what was happening to my body physically, the more anxious I became. But my physical symptoms were incomparable to the emotional pain.

The sadness felt inescapable. With that came anxiety and fear about whether I would get pregnant again, and if I would have to endure another miscarriage. Those thoughts dominated my mind, making it difficult to feel hopeful about my future.

The loss also triggered prior grief. Nine years before we miscarried, I lost my mother to ALS and five years prior, I lost my father to cancer. Each death eroded my ability to stay positive a little bit more than the prior. I wondered how many more losses I could endure.

According to a recent study published in the American Journal of Obstetrics and Gynecology, one in four women experience post-traumatic stress disorder (PTSD) one month after a pregnancy loss. Although I wasn't officially diagnosed with PTSD, I still experienced the symptoms.

I couldn't escape the image of our motionless baby on the ultrasound screen or the sound of the suction, which woke me in the early morning hours the first night after our miscarriage. I cried so hard that I woke my husband. The nightmares continued for weeks.

The morning after a nightmare, I would open my eyes, remember what happened, and eagerly wait for the day to end.

I felt exhausted, but my mind was wired — I felt alone, but unable to connect with those I love.

Through research, I discovered my symptoms were common. One in two women who miscarry experience depressive symptoms shortly after, and two in five experience anxiety immediately following the miscarriage. But at the moment, the American Association of Obstetricians and Gynecologists does not specifically recommend screenings for depression and anxiety symptoms after a miscarriage.

The impact of miscarriage is understood, but rarely mentioned. Doctors are not mental health care providers, but they are the gatekeepers to information for women who miscarry. The mental health effects of a miscarriage are well established and women deserve care which acknowledges that fact.

No one asked me how I was doing emotionally. It was assumed that I was fine. No follow-up appointment was offered. Shame in miscarriage is common, but often silenced.

Because I had experienced significant grief before, I recognized that my mental health was not well, and I needed help

If I was going to get better, I needed to start talking. I began to share my story with family and friends, asking for support. I continued to see a therapist. My husband and I spoke often of our loss and supported each other through the grief we faced together and individually.

There was never a magic moment when the pain suddenly left. But with time it became more bearable. The more I shared, the less I felt ashamed of my experience, and the more I recognized that despite its commonality, miscarriage is a loss, which can take a significant emotional toll.

Weeks ago, over a year after our miscarriage, I left the hospital after giving birth to a baby girl.  Almost every day since, I have breathed in her newborn scent and stared at her in amazement.

I understand how lucky we are to have a healthy baby.

As I breastfed her at 5 o'clock this morning, exhausted from sleeping only two hours at a time during the night, I read Chrissy Teigen's Instagram post. "We are. . . in the kind of deep pain you only hear about," she wrote on Instagram as she bravely shared the news of her pregnancy loss.

Holding my daughter, my face was covered in tears by the final words of the post. Her words reminded me of the emotional pain we endured not long ago.

The birth of my daughter does not erase that experience or our loss. Rather, our baby boy who passed is now a part of my story that I am no longer afraid to accept.

Katie C. Reilly is an attorney and writer. Her work primarily focuses on women's health, grief and social justice issues.