More than 130,000 university students will graduate this year into the worst jobs market since the 1990s recession, as economists warn it could take them years to rebound from lower wages.

With thousands of students preparing for their final university exams, data collated by SEEK reveals job ads have declined substantially across a range of industries compared to the same time last year. 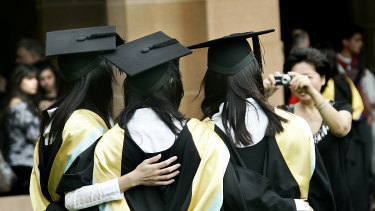 Many university graduates will be seeking to enter the toughest job market since the 1990s recession. Credit:Rob Homer

"These are the ones who … if we revisit them in 10, 20 or 30 years time, over that time, compared to someone arriving [in the workforce] not in a recession, end up with lower wages. They are the classic scarring victims,” Mr Richardson said.

Department of Education figures show the number of domestic students graduating with bachelor degrees in universities across Australia has increased from about 133,600 in 2015 to almost 139,000 in 2019. Given enrolments have remained steady in recent years, the class of 2020 is also expected to comprise more than 130,000 graduates.

The impact of scarring on graduates – that is the negative impact of entering the workforce during a downturn – has been extensively studied in places such as America and Europe but has drawn little research focus in Australia.

However, a Department of Treasury research paper, published in June, found that a 5 percentage point increase in the rate of unemployment causes a decline in earnings of 8 per cent in the first year after graduation and 3.5 per cent after five years, before fading to around zero 10 years on.

University of Melbourne economics professor Jeff Borland said this meant graduates who entered the workforce in this kind of downturn would earn on average 30 per cent less over their first five years compared to those who graduated in a normal labour market.

He said it was still too early to say how deep the COVID-19 recession would be, but even on a "best case scenario" graduates over the next one to two years would enter a labour market "as bad as any time in the last 30 years".

"We're likely to see outcomes for young people that are worse than anything that young people have had to experience since the 1990s recession," Professor Borland said.

Economist Jim Stanford, director of the Australia Institute's Centre for Future Work, said it was a "sad reality" that some graduates would experience a permanent downward shift in their employment trajectory and "never catch up".

"This is definitely the worst job market Australia has faced in 30 years. And young people always get the short end of the stick: they are typically the last hired in an upturn, and first fired in a downturn," Dr Stanford said.

Liam Donohoe, president of the University of Sydney's Students' Representative Council, said there was "widespread fear and uncertainty" among the student cohort preparing to graduate this year.

"Many of the roles they were hoping to take up either don't exist or are so few and competitive as to make them unrealistic," Mr Donohoe said.

Currently, there are 7.8 entry-level applicants for each available job at their experience level, up from 5.5 last year, Anglicare Australia's Jobs Availability Snapshot shows. This figure does not include experienced workers who could also apply for entry-level positions, which would push the competition up to 106 people per job.
The effects of the coronavirus-induced recession on young workers' careers was a major focus of last week's federal budget after analysts estimated these new entrants could take a decade-long income hit worth $32,000.
Under the budget changes, employers that hire young workers who were studying or unemployed to fill a new job will get up to $10,400 in a hiring credit from the government. The $6 billion spending measure is estimated to create 450,000 new jobs.