Feed a family of four for just a POUND a plate: Chef creates five days’ of dinners for £20 including ham and leek pie and lamb tacos – and you won’t have ANY leftovers

A thrifty chef who creates recipes that all cost £1 or less has shared a meal plan that can feed four people dinners for five days for £20.

He’s now created a meal plan for FEMAIL readers that will cost you less than £20 for 20 meals, with recipes taken from his newest cookbook Super Easy One Pound Meals, published this week. 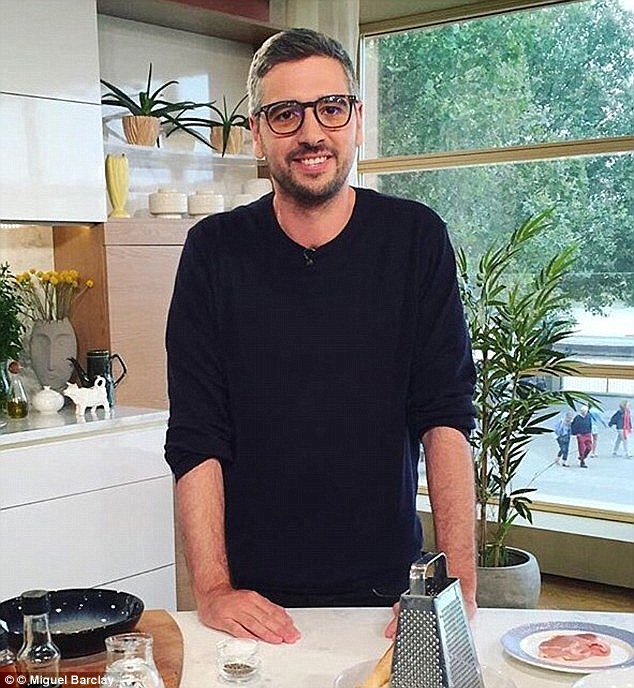 Miguel Barclay, 37, of London, publishes this third cookbook, Super Easy One Pound Meals, on Thursday and has shared a thrifty meal plan with recipes from it with FEMAIL

Miguel first rose to fame on Instagram for his picture-perfect £1 meals under his One Pound Meals brand.

He’s now crafted a new thrifty meal plan which includes a different meal for four every night from Monday to Friday, without any leftovers. 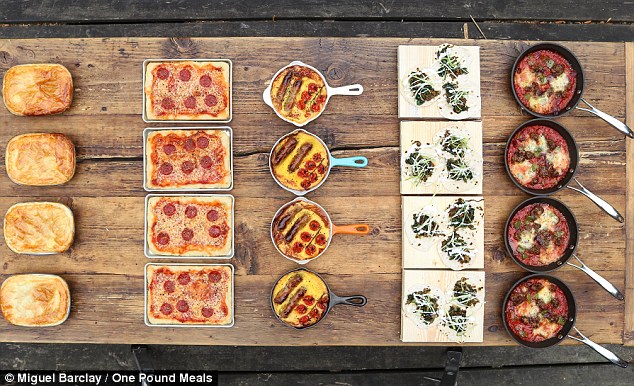 Miguel’s five-day meal plan for £20 is made up of 20 meals that could feed four people for five nights. From left to right his dishes are: a ham and leek pie; a pepperoni Detroit pizza; a sausage and polenta bake; keema lamb tacos; and a sloppy Giuseppe stew

To keep costs low, he found the lowest prices at different supermarkets, and shopped at Aldi, Asda, Sainsbury’s, Tesco, and Morrisons.

His meals are budget versions of hearty classics that he says still pack a punch of flavour and will keep you full.

But instead of using pricey ingredients, he buys own-brand items and the cheapest meat available. 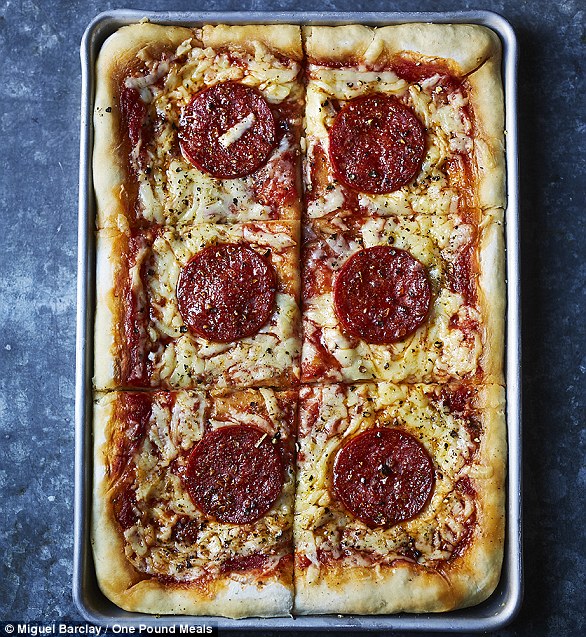 Plus extra for dusting

2. Using a spoon, mix the flour and water together in a bowl along with a big pinch of salt to form a dough. Dust the worktop with a little flour then knead the dough on the worktop for a minute or two until smooth.

3. Roll it into a rectangle. Lay the dough onto a 15 x 23cm baking tray (increase the ingredient quantities if you are using a bigger tray) and push the dough into the edges and corners.

4. Spread the passata over the top, leaving a border around the edge, and season with salt and pepper. Sprinkle over the oregano and cheese and top with the pepperoni slices, then bake in the oven for about 20 minutes until the base is cooked and the cheese is nicely melted.

Miguel takes pride in simplifying his recipes to remove unnecessary, expensive ingredients while still retaining the flavour in his food.

Of his Detroit pizza, for example, he says: ‘I’ve taken out every superflous step to create this amazingly simple but really tasty pizza with a characteristic Detroit-style square shape and thick crust.’

He also called it the ‘easiest pizza ever’. 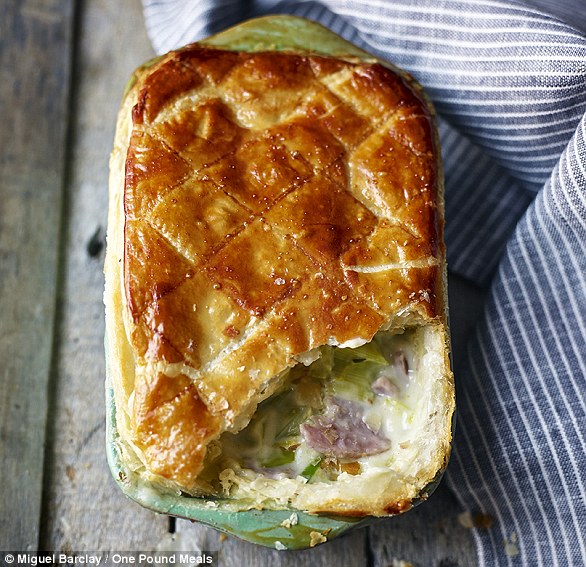 2. Fry the chopped leeks in an ovenproof dish or pan* in a splash of olive oil over a medium heat for a few minutes until soft. Add the flour and cook for a further minute.

3. Gradually add the milk, stirring continuously, and cook until you have a smooth sauce. Remove from the heat, stir in the cheese, season with salt and pepper and add the ham.

3. Top the filling with a piece of puff pastry cut to the same size as the top of the dish or pan, score it lightly in a criss-cross pattern to make it look pretty, and bake for about 20 minutes, until golden brown on top.

*If you don’t have a pan with an ovenproof handle, then just use your normal pan and transfer the filling to an ovenproof dish before adding the puff pastry lid.

In Miguel’s ham and leek pie, he swaps out pricey cuts of pork for regular – and cheap – sandwich ham.

He says: ‘This is comfort food at its best! A luxuriously gooey cheesy sauce with a flaky pastry lid and all made with the very minimum of effort.

‘Using regular sandwich ham, this recipe shows that cooking on a budget does not have to compromise on your enjoyment of food. 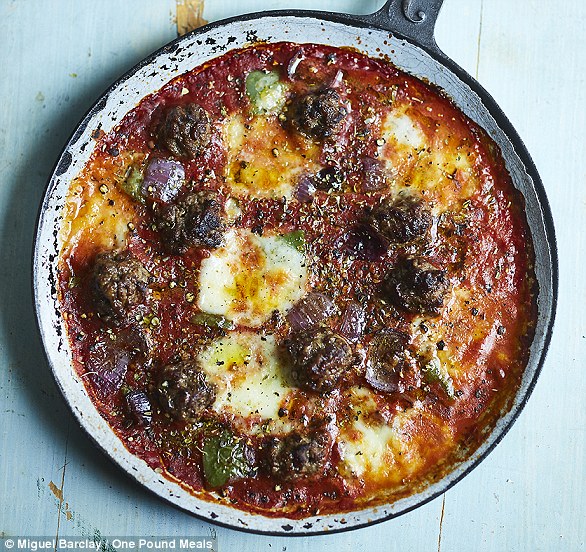 2. Season the minced beef with salt and pepper and roll it into little balls. Grab an ovenproof pan* and pan-fry the meatballs in a glug of olive oil over a medium heat for about 5 minutes.

3. When the beef starts to brown, throw in the onion and green pepper, then fry for a further 5 minutes until the onion starts to colour.

3. Remove the pan from the heat, tip in the passata, chunks of mozzarella, season with salt and pepper and sprinkle over the oregano. Cook in the oven for about 15 minutes until the cheese has melted, then serve.

* If you don’t have a pan with an ovenproof handle, then just use your normal pan and transfer the meatballs, onion and pepper to an ovenproof dish before adding the passata, mozzarella, salt, pepper and oregano. 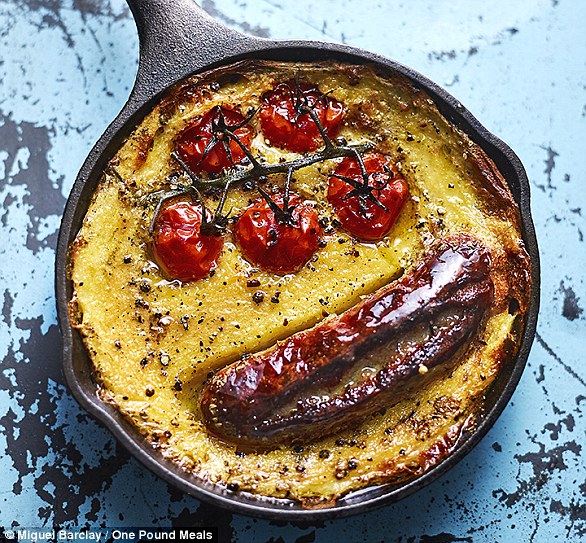 A few cherry tomatoes (on the vine)

2. Put the polenta and milk in an ovenproof dish or pan. Season with salt and pepper, stir, then throw in the sausage and the tomatoes.

3. Bake in the oven for about 45 minutes until the sausage is nicely browned, then serve garnished with cracked black pepper and a glug of olive oil.

For a sausage and polenta dish, he found a way of cooking polenta that doesn’t require constant stirring.

He said: ‘I knew there had to be a simple way of cooking polenta, so I devised this huge shortcut to create a tasty oven-baked polenta dish that requires just 2 minutes prep and no stirring or checking while it’s cooking.’ 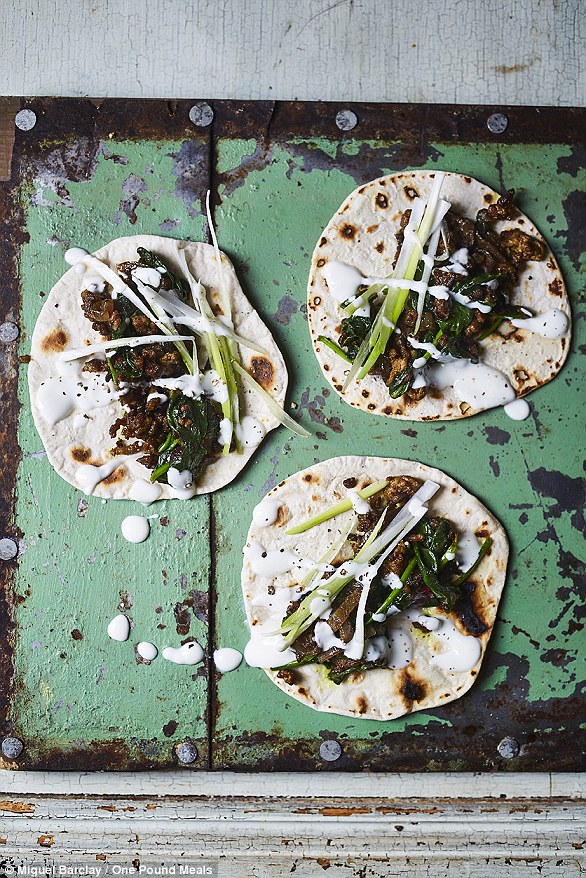 Serves one (multiply for four)

1. Mix the flour and water in a bowl with a pinch of salt to form a dough. Knead on the work surface for a minute or two until you get a smooth dough.

2. Cut it into three balls and roll each ball out into a roughly 10cm circle. Heat a dry frying pan over a high heat, add a circle of dough and cook for 2 minutes on each side, until nicely toasted. Set to one side and repeat with the remaining dough.

3. Pan-fry the onion in a splash of olive oil over a medium heat for a few minutes until softened, then add the lamb, season with salt and pepper, add the curry powder and cook for about 10 minutes.

3. When the lamb is cooked, throw in the spinach and let it wilt.

4. Now, assemble the tacos. Spoon some filling onto each taco, drizzle with yogurt and top with spring onion.