Federal officials investigating whether Australia's 2632 aged care facilities meet quality and safety standards claim they are unable to spot gaps that may put residents at risk because the regulator is toothless, under resourced and understaffed.

Complaints have skyrocketed during COVID – particularly about infection control – and response times have blown out to more than 190 days in many cases, according to the union representing staff at the Aged Care Quality and Safety Commission (ACQSC). 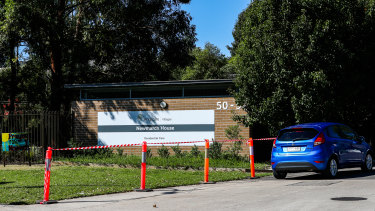 The regulator did not look into the outbreak at Newmarch House earlier this year. Credit:Edwina Pickles

In a submission to the aged care royal commission in June, the Community and Public Sector Union (CPSU) said morale among union members and other staff at the regulator has been "incredibly low".

This claim was disputed by the regulator's commissioner, Janet Anderson, who said staff feedback during COVID-19 had been positive.

The union said nearly 60 per cent of assessors felt ill-equipped to identify gaps in care because they didn't have enough time on site to identify problems, according to a survey of 60 staff employed by the regulator in February and March.

"Without additional staff to share the workload of monitoring the existing care facilities against the already more rigorous set of standards, assessments will continue to be rushed, with long wait times on assessment turn around while care is poor," the submission said.

Officials felt they didn't have sufficient powers to get answers. 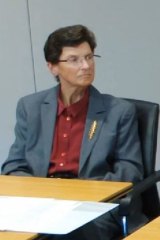 Janet Anderson when she appeared before the aged care royal commission last week.

"We often feel we are regulating with our hands tied behind our backs," a staff member told the CPSU.

"We are not allowed to photographically record information, copy and take information, audio record key interviews.

"The commission is a bit toothless in holding providers to account."

Another assessor said there was "no real penalty to failing the meet standards. Just the inconvenience of additional visits from the commission." 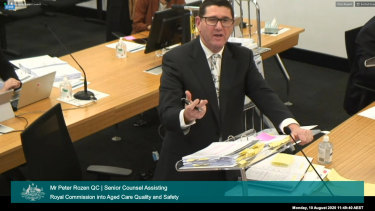 CPSU deputy secretary Beth Vincent-Pietsch said the COVID-19 crisis in Victoria had only exacerbated existing pressure points caused by a lack of resources, understaffing and the use of contracted labour hire.

The results of the survey were also consistent with what members and delegates had been telling the union in meetings throughout the year, including a few weeks ago.

"They really want to see improvements, but it is a really hard job, particularly with inadequate training it can be overwhelming. And now with the current pressures, it is a very intimidating space to be in," she said.

Comparable regulators in fields such as workplace or airline safety had much greater powers to investigate, particularly after fatalities and other incidents, the aged care royal commission heard last week.

Senior counsel assisting the commission Peter Rozen, QC, said it may surprise some people that the regulator had not investigated the circumstances around the outbreaks of COVID-19 at Dorothy Henderson Lodge and Newmarch. He said these were usually key tasks of any regulator.

When assessors from the regulator entered a care home, an employee of the nursing home may refuse to answer it without reason, under the legislation passed in late 2018.

Officials have broad search powers under the Aged Care Quality and Safety Commission Act, but the facility's owners can withdraw consent.

The ACQSC saw a 34 per cent increase in 4599 complaints, enquiries and out of scope matters from March 1, 2020 and May 10, 2020, according to an internal staff communique obtained by the union. About a third of these calls related to the quality of care, restrictions on visitors and facilities' preparedness – and prevention – of the spread of the virus.

Response time had blown out to longer than 190 days in some cases, with as many as 300 cases unresolved at some times, the union claimed.

Ms Anderson said the percentage of complaints from January to July 31 that were resolved within 60 days was 74 per cent compared with 77 per cent in the same period in the previous year.

She said the ACQSC aimed to finalise 80 per cent of complaints within 60 days. Many complaints took months to resolve, and those received recently were becoming "increasingly complex and multi-factorial". She also stressed that the survey by the CPSU pre-dated the pandemic.

The CPSU is also alarmed by the use of labour hire or contract staff, including 20 who were hired as assessors earlier this year. These new hires were often overwhelmed, said Ms Vincent-Pietsch, and they didn't have the training or the confidence to handle difficult situations that assessors often faced when they visited aged care facilities.

About 25 per cent of staff are now labour hire.