Women fleeing abusive relationships are getting caught up in protracted and costly legal disputes because there still isn't a way for the tax office to easily share superannuation information with courts, nearly two years after it was promised. 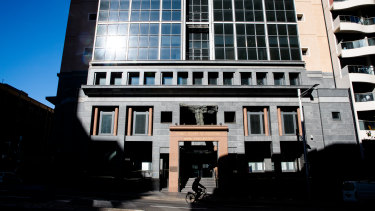 Reforms to streamline Family Court proceedings are at risk because of a delay in setting up a scheme to share information from the tax office.Credit:Edwina Pickles

The government announced in its November 2018 women's economic security statement it would make it easier and faster to identify superannuation assets during family law proceedings. Ministers are now working on an updated women’s economic statement.

Superannuation is often a significant portion of the asset pool that is split when a relationship breaks down but it can be very difficult to identify where the money is held or how much there is if one partner won't give the information.

Women's Legal Service Victoria senior policy advisor Tania Clarke says dragging out court battles like this can end up meaning the lawyer's bill is bigger than any eventual payout.

"If you don't know the name or names of the super funds, it's literally like going on a fishing expedition and a very costly one at that," she said.

One woman said having to continually request information for her separation was one of the hardest parts of the court process.

"It caused so much more anger with him and so many unnecessary hurtful interactions, communications with him," said the woman, who asked to remain anonymous for her safety.

"I had the opportunity to get back into the house while he was at work and I literally had to go and rifle quickly through our filing cabinet just to write down anything I could, any kind of numbers I could see.

"It would be amazing if someone said, oh no, Mr So-and-so, it's the law, you have to provide this information."

Ms Clarke has been advocating since 2016 for the ATO information sharing scheme. After the 2018 announcement, those in the field believed it would be running by July 1, 2020, but that has passed with no sign of it.

Finance Minister Mathias Cormann said in a question on notice this week the co-design process had started between the ATO, Family Court and the Attorney-General's Department and draft legislation to underpin it would be released "as soon as practicable".

"Further, it must be noted, that time is of the essence as perpetrators are able to decrease the property pool by accessing their super early under the COVID-19 early release of superannuation scheme," it states.

Ms Clarke said that without the ATO information sharing scheme, these other reforms were being severely compromised.

Opposition spokeswoman for preventing family violence Jenny McAllister says the project is clearly not on track.

"The government acted quickly to make it easy for people to access their super during the coronavirus pandemic, but has sat on its hands when it comes to helping women in abusive relationships access their share of super assets," she said.