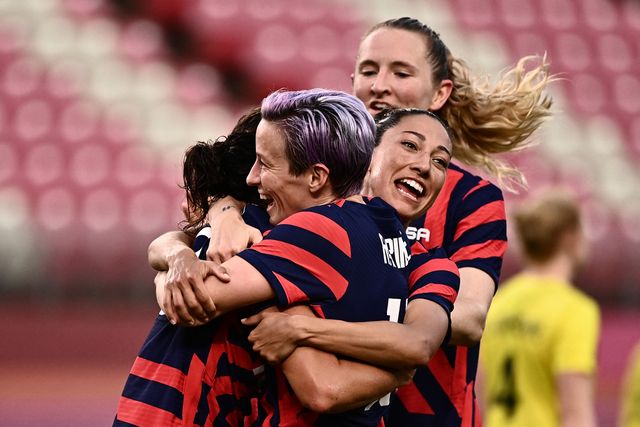 The U.S. women’s soccer team players are finally getting what they have always deserved. A six-year dispute over equal pay ended today with a settlement between the United States Women’s National Team and U.S. Soccer.

“Getting to this day has not been easy,” they said in a joint statement. “The U.S. Women’s National Team players have achieved unprecedented success while working to achieve equal pay for themselves and future athletes.”

U.S. Soccer agreed to pay $24 million in the settlement—$22 million to the 28 team players in the case, as well as an additional $2 million into an account to be used by USWNT players for “their post-career goals and charitable efforts related to women’s and girls’ soccer,” according to CBS Sports.

Likely the most rewarding part of the deal for the players is U.S. Soccer’s promise to equalize pay between the men’s and women’s national teams in all competitions: friendlies, tournaments, and the World Cup. “Today, we recognize the legacy of the past USWNT leaders who helped to make this day possible, as well as all of the women and girls who will follow. Together, we dedicate this moment to them,” their statement read.

U.S. Soccer and @USWNT are proudly standing together in a shared commitment to advancing equality in soccer. pic.twitter.com/Sp8q7NY0Up

“It’s a little bit surreal to be honest,” Rapinoe said. “We’ve been in this for a long time and coming from a long history of women that have fought to put this sport in a better place.”

She said what she’s most excited about is the fact that “it’s equal pay across the board from here on out,” not just for her and her teammates, but also for the next generations.

“I’m looking forward to continuing to grow the sport and to have this be a moment we look back on that signals a new U.S. Soccer we can all be extremely proud of,” Rapinoe said, adding later, “The biggest piece of the legacy that us of this generation can take is that the players coming up next will have a much better ability to just play.”

She also tweeted her excitement following the news of the settlement. “When we win, everyone wins!” she wrote.

When we win, everyone wins!

Morgan agreed with her teammate, saying, “We feel very comfortable and happy and proud with the moment that we’ve got to right now, because it is a huge win for us, for women’s sports, for women in general—and it’s a moment that we can all celebrate right now.”

She added that it’s also a relief to be able to mend their relationship with U.S. Soccer. “We look forward to continuing to work together to grow women’s soccer and advance opportunities for young girls and women in the United States and across the globe,” USWNT and U.S. Soccer said in their joint statement.

The equal pay dispute began in March 2016, and then raised the stakes three years later when the women’s soccer team filed a gender discrimination lawsuit against U.S. Soccer. Their claim that they were paid less than the men’s team was rejected in May 2020 by Federal Judge Gary Klausner, who said the women played more matches, and therefore made more money. But the USWNT filed an appeal against the ruling, saying the decision was “legally wrong.”

U.S. Soccer later offered to give the women’s team the same contract as the men’s. The new settlement is contingent on the ratification of a new collective bargaining agreement for the women’s team.

In May of last year, Rapinoe spoke to BAZAAR about the years-long equal pay battle with U.S. Soccer. She expressed her anger at the gender discrimination that exists in many sports and the fact that in U.S. soccer, the women’s team has always been expected to perform at the same level as the men’s—with players pushing their bodies to extremes and revolving their lives around the sport—but for years, was given a third of the money.

“Money is the way our society shows people, especially in sports, how we value them,” Rapinoe said at the time. “We know exactly what’s in a contract every time a man signs it. We never know what women make. Why is it? Because they’re not something to be proud of. We need to change that narrative.”

Now, they are doing just that.