Where is EastEnders’ original Lauren Branning actress now and what does she do as a job? 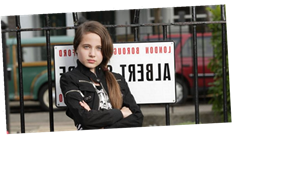 Before Jacqueline Jossa played Lauren Branning on EastEnders, the part was filled by actress Madeline Duggan, 26. The brunette beauty joined the show in 2006 at the age of 12 and stayed on our screens until she was 15, when she was dropped from her role.

The fresh faced actress we watched frequently has changed a lot from her soap days. Since leaving Walford, Madeline has become somewhat of a social media queen. She posts regularly to her 21,000 followers on Instagram sultry snaps of her looking stunning and completely grown up. In one photo the stunning star is wearing an all black seventies-style jumpsuit, with a plunging neckline and and flared trousers. She captioned the picture: "I've finally realised I can't control my facial expressions. Happy or sad that is it (look at my dog judging me)."

In another shot she showcases her incredible figure in a swimsuit she is wearing in Las Vegas which really flaunted her assets due to its flattering cut which included a slit to just above the naval.

She paired the look with gold wedge sandals and a gold woven-style bracelet. Since leaving the soap Lauren has continued acting, having appeared in Sky1 drama The Smoke and Silent Witness. Additionally, last year fans were thrilled when Madeline reunited with her former on-screen boyfriend Thomas Law, who played Peter Beale.

The old friends and former child stars’ were at a wedding together and posed for a snap with Madeline captioning it: "Peter and Lauren bump into each other at a wedding 8 years later." Thomas was also on the soap up until 2010, when his storyline finished at Albert Square. Alike to Madeline’s his character was also recast with Ben Hardy returning to play his part in 2013.

Meanwhile, Madeline has also made an appearance in Dates and By Any Means, and has stared alongside the former Game of Thrones star Stephen Dillane in the hit thriller The Tunnel: Sabotage in 2016. However, more recently she acted in Home Alone. Lauren referenced the profession earlier this year amid the coronavirus pandemic while talking about the importance of health care.

She penned on Twitter: "Really worried about all the other health issues that will be missed due to Covid. please, if your GP says you need to go to the hospital for anything urgent please just go."

She continued: "I know this because I work in a doctors surgery part time (because being an out of work actress doesn't pay lol). [sic]

"So many patients are refusing to go A&e & thinking our GPs can fix everything over the phone. If your GP says go to the hospital it's for good reason."