Why Matthew McConaughey Doesn't View Himself as a Victim After Molestation, Blackmail

Both incidents happened when he was a teenager.

Matthew McConaughey made headlines when he began his new book “Greenlights” by revealing he had been molested and the subject of blackmail as a teenager, but that definitely wasn’t his intention.

During an appearance on “The Tamron Hall Show” on Friday, the 50-year-old actor explained why he only briefly mentioned both instances at the top of the memoir but offered no other details in the rest of the book.

Just a couple pages in, McConaughey shared a few facts about himself “to help set the table” for the rest of the book. “I was blackmailed into having sex for the first time when I was fifteen,” he wrote as part of the list. “I was certain I was going to hell for the premarital sex. Today, I am merely certain that I hope that’s not the case.”

He also said he was “molested by a man when I was eighteen while unconscious in the back of a van.”

When asked by Hall why he didn’t offer further details, McConaughey said it was a “good question.”

“They could’ve been the thing that every single show was going to go, ‘Read about the details of when Matthew was molested,’ or ‘Read about when he got blackmailed,’ and that’s the wrong headline,” he continued. “Because I also write in the book I’ve never felt like a victim.”

“You could argue, yes, was I victimized in those two situations? Sure,” he added. “But that doesn’t mean that I’ve carried on through my life the feeling of ‘Oh, I was victimized,’ or, ‘Oh, I was a victim,’ or that those two unfortunate events have turned me into the man that I am or are even an excuse.” 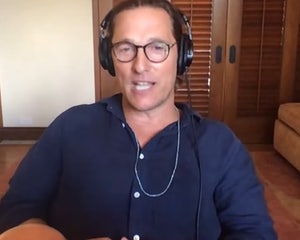 When Hall noted that she appreciated him saying that no one thing was the whole sum of his journey, McConaughey said that had both incidents happened even earlier in his life, they likely would have had a bigger impact on him.

“So I think having that clarity means that it’s probably why it didn’t stick with me and confuse me later on or left me having a non-realistic view of the way the world is supposed to work,” he added. “If it had happened much younger, maybe I would have had a confusion and it would have stuck with me and been something I had to work out. Because I was clear those were wrong, that’s not how life’s supposed to go and that’s now how I was going to continue with it, maybe that’s why it didn’t stick with me or I didn’t have to go work it out.”

The actor’s book, “Greenlights,” is out now.