A Windsor wonderland! Castle where the Queen is spending Christmas is decorated with garlands, lights and a 20ft tree before the festive display opens to the public

Households across the UK are decking the halls for Christmas – and Windsor Castle is no different.

The Berkshire royal residence, where the Queen and the Duke of Edinburgh will be spending the festive season, has been transformed with twinkling lights, festive garlands and towering 20ft Christmas trees topped with angels.

Visitors will be able to view the dazzling decorations in the State Apartments – which are separate from the Queen’s private quarters – from tomorrow.

It comes as it was announced the Queen has been forced to cancel her annual Christmas gift-giving ceremony for the first time in her reign due to Covid restrictions. 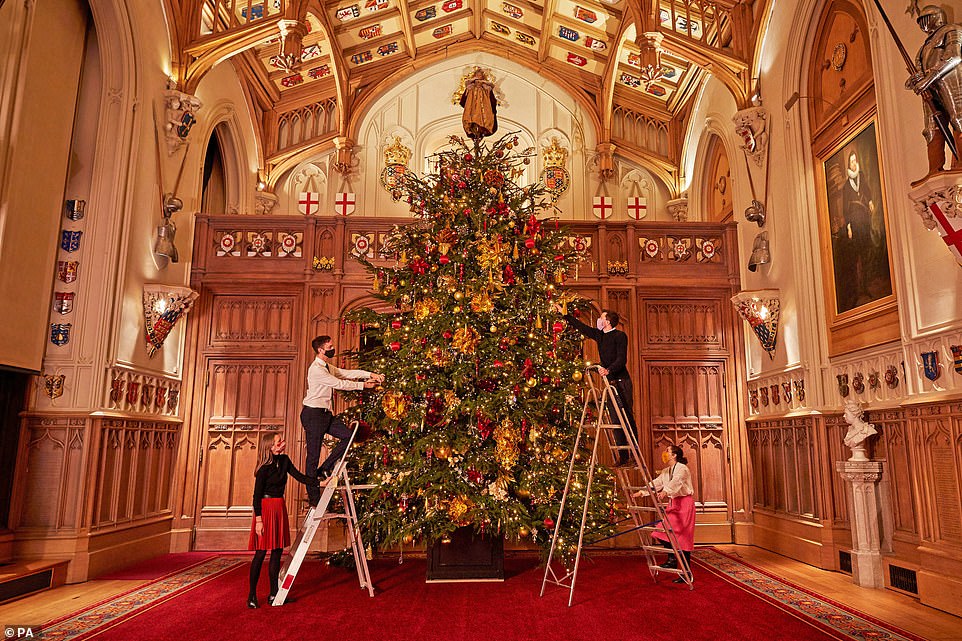 Dazzling decorations: Saff put the finishing touches on the 20-foot-high Christmas tree in St George’s Hall, the largest room in Windsor Castle. Visitors will be able to view the decorations in the State Apartments from tomorrow 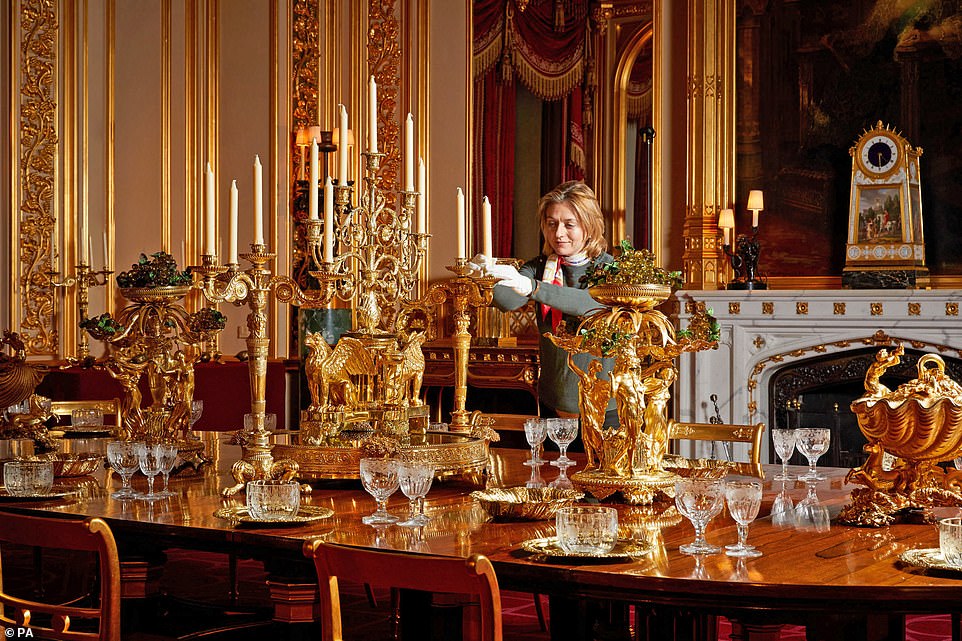 Commemoration: To mark the bicentenary of George IV’s accession to the throne in 1820, the State Dining Room table will be laid with a spectacular display of his silver-gilt Grand Service, pictured 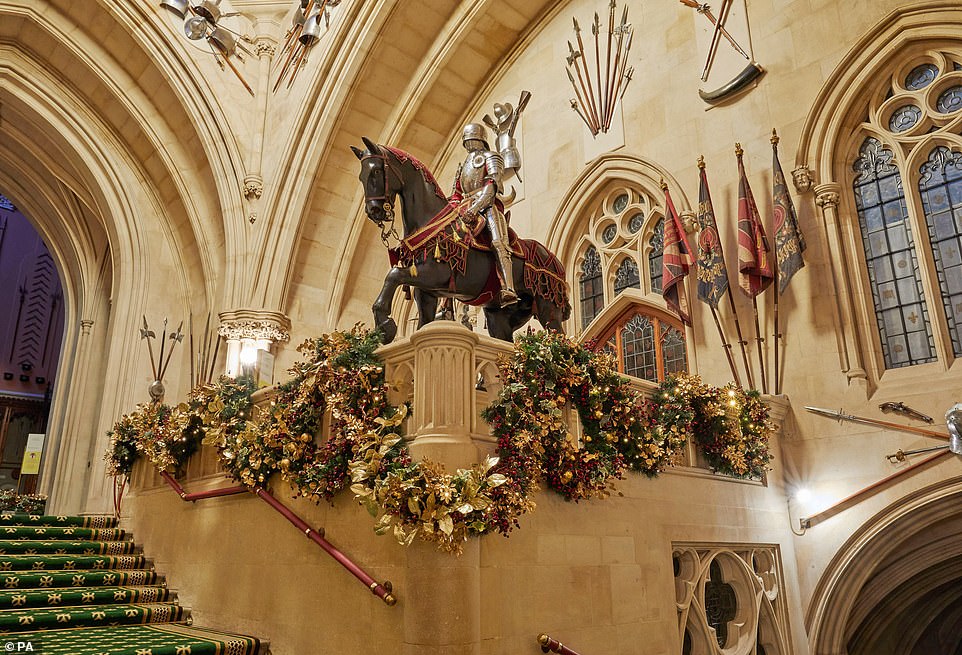 Full of festive cheer: Festive garlands adorn the Grand Staircase at Windsor Castle after being decorated for Christmas

The Queen has been forced to cancel her annual Christmas gift-giving ceremony for the first time in her reign to Covid restrictions.

Every year the Monarch, 94, order presents for every single member of the royal household, which are usually given to them along with a Christmas pudding in the Advent period.

Past favourites include a special trinket box or a photo frame engraved with her personal cypher and champagne flutes.

The Queen personally hands over her token of appreciation to a small selection of staff by the Christmas trees at Buckingham Palace and Windsor Castle as a special thank you for their loyal service, before she de-camps to Sandringham until February.

However, this year the intimate ceremonies have been cancelled due to social distancing regulations and the need for the 94-year-old monarch to stay in a strict operational bubble. 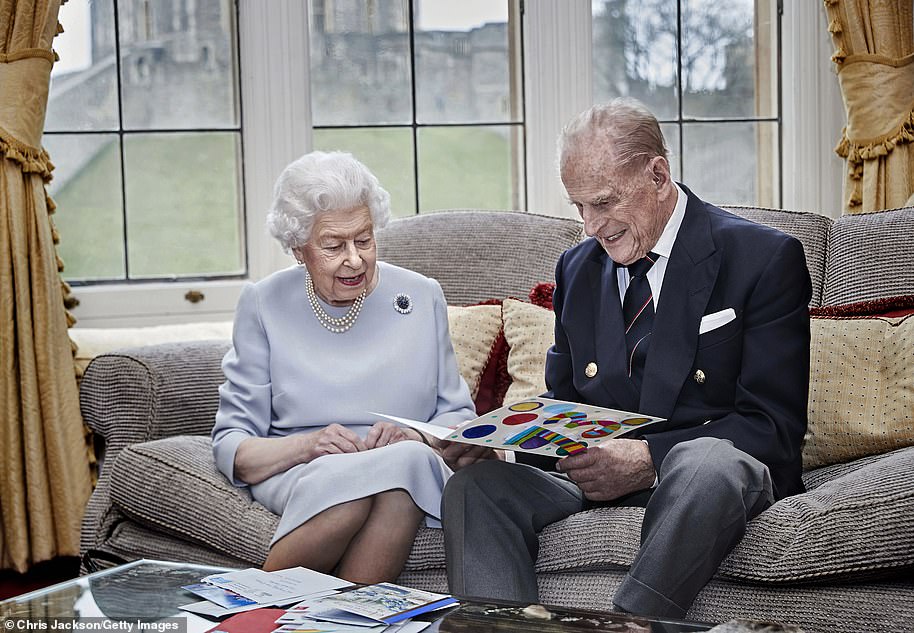 The Queen and the Duke of Edinburgh, who will be spending Christmas ‘quietly’ at Windsor Castle this year, will not personally hand over gifts to royal staff, as has been the tradition throughout the 94-year-old Monarch’s reign 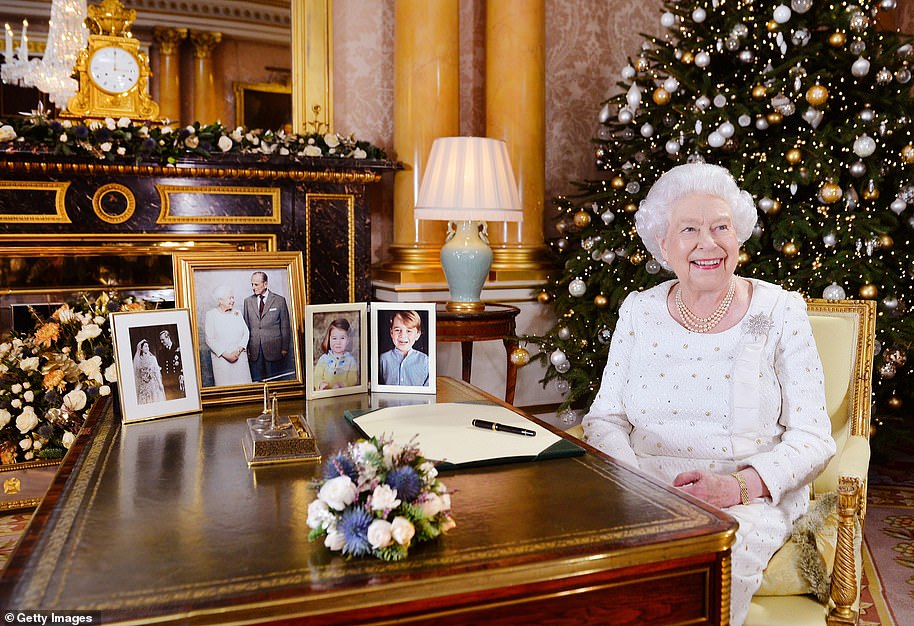 Known to spend thousands of pounds on her staff at Christmas, with favourites including a Christmas pudding, champagne flutes or engraved trinket boxes, the Queen will still gift presents but, due to the pandemic, won’t hand them over personally

The Queen and the Duke of Edinburgh will spend Christmas ‘quietly’ at Windsor Castle.

Royal employees have also been informed, unsurprisingly, that the Palace’s main official Christmas party, as well as all smaller staff events, have been cancelled.

The annual lunch the monarch holds on the Wednesday before Christmas for her own extended family – which normally sees more than 25 royals and their children sit down to a full turkey lunch – has also, inevitably, fallen by the wayside, sources confirmed.

‘It’s a great shame but inevitable and the right thing to do,’ a source said.

‘The staff will still receive a gift from the Queen as usual but there will be no special moment with Her Majesty. It’s as much a disappointment for her as it will be for them, as it’s a hugely special time of the year.

‘And like offices around the country there will be no Christmas parties at Buckingham Palace or any of the royal residences this year. It’s the way it has to be.’

To mark the bicentenary of George IV’s accession to the throne in 1820, the State Dining Room table will be laid with a spectacular display of his silver-gilt Grand Service.

The wartime ‘pantomime pictures’ remain on display in the Waterloo Chamber and on Saturdays throughout December, families visiting the Castle can enjoy storytelling and craft activities.

The Undercroft Café will be serving a special range of festive fare, from turkey sandwiches to cranberry and orange éclairs.

It was announced yesterday that the Queen and Prince Philip will spend Christmas ‘quietly’ at Windsor Castle.

The Queen 94, and Prince Philip, 99, traditionally spend the festive season with close family at Sandringham, in Norfolk. But this year they will forgo the festivities and remain at Windsor Castle, where they have been isolating with a ‘bubble’ of staff since October. 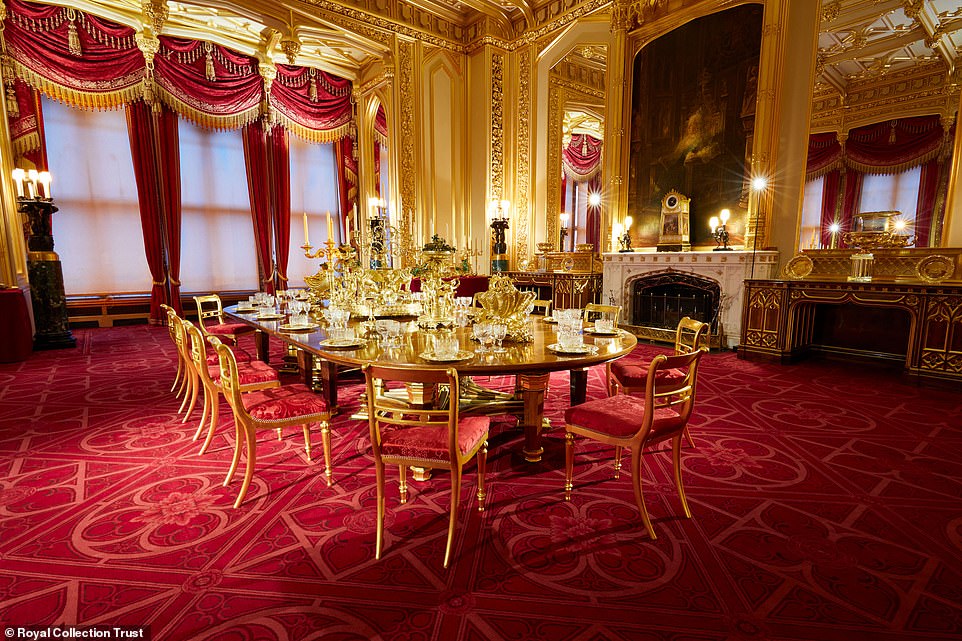 Breathtaking: George IV’s silver-gilt Grand Service on display in the State Dining Room to mark the bicentenary of his ascension to the throne 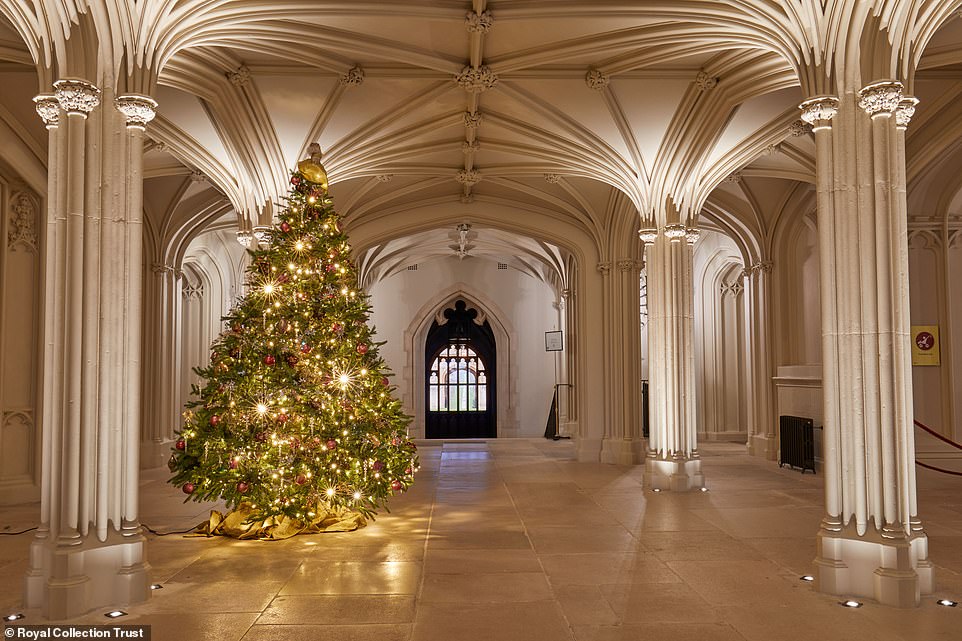 Bright and beautiful: A twinkling Christmas tree brings festive cheer to one of the grand halls at Windsor Castle 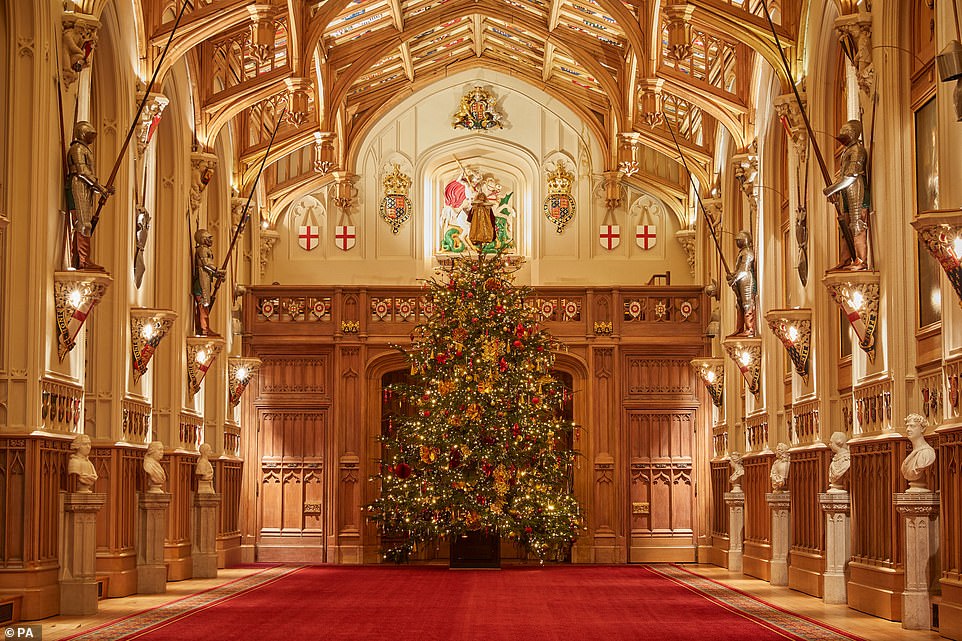 Centrepiece: The 20-foot-high Christmas tree in St George’s Hall, the largest room in Windsor Castle, is topped with an angel 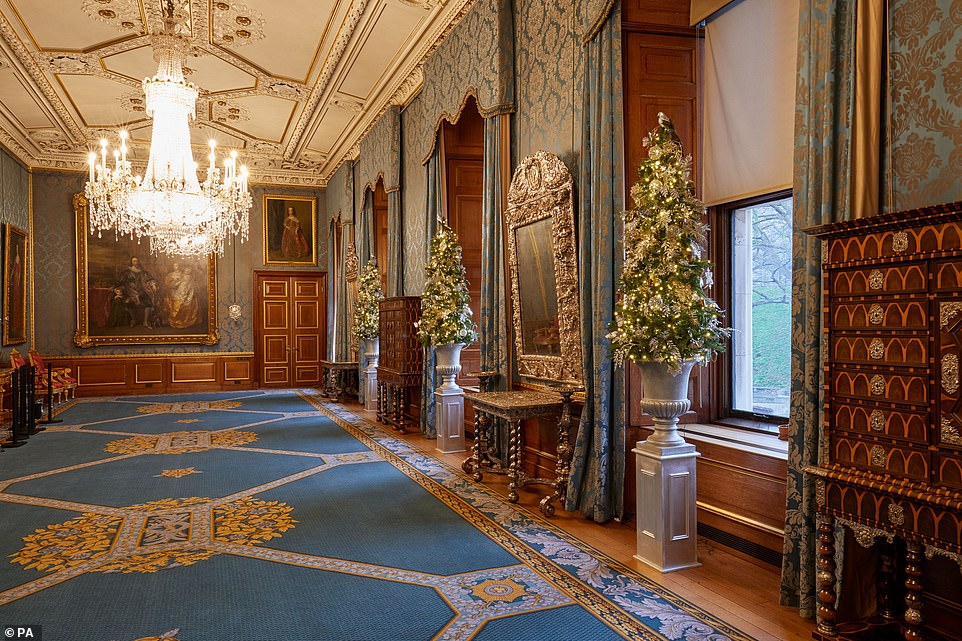 ‘Tis the season! Shimmering Christmas trees in the Queen’s Gallery at Windsor Castle go on display to the public tomorrow 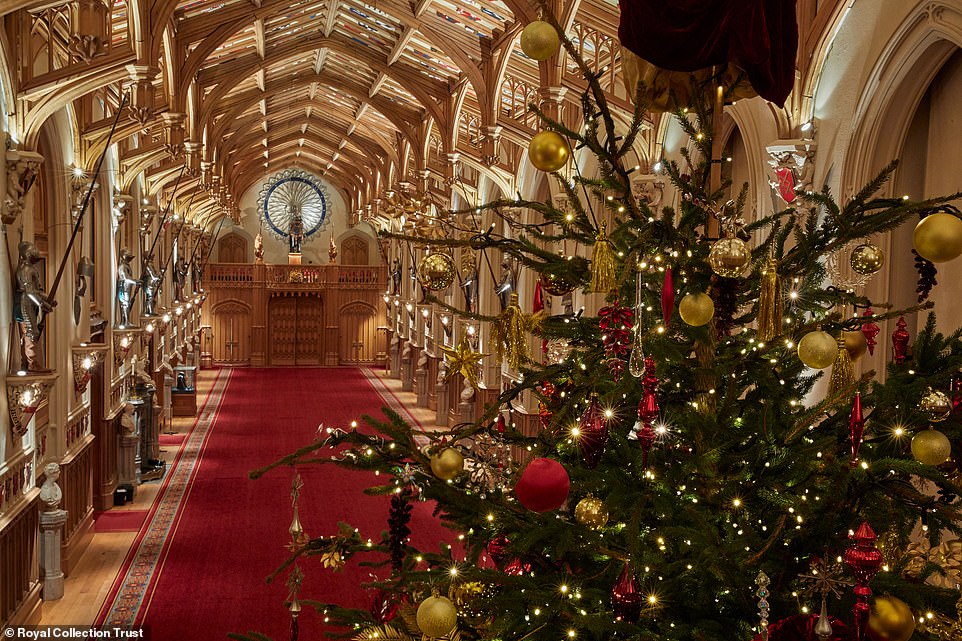 Towering: A view from behind the 20ft Christmas tree in St George’s Hall, at Windsor Castle, today 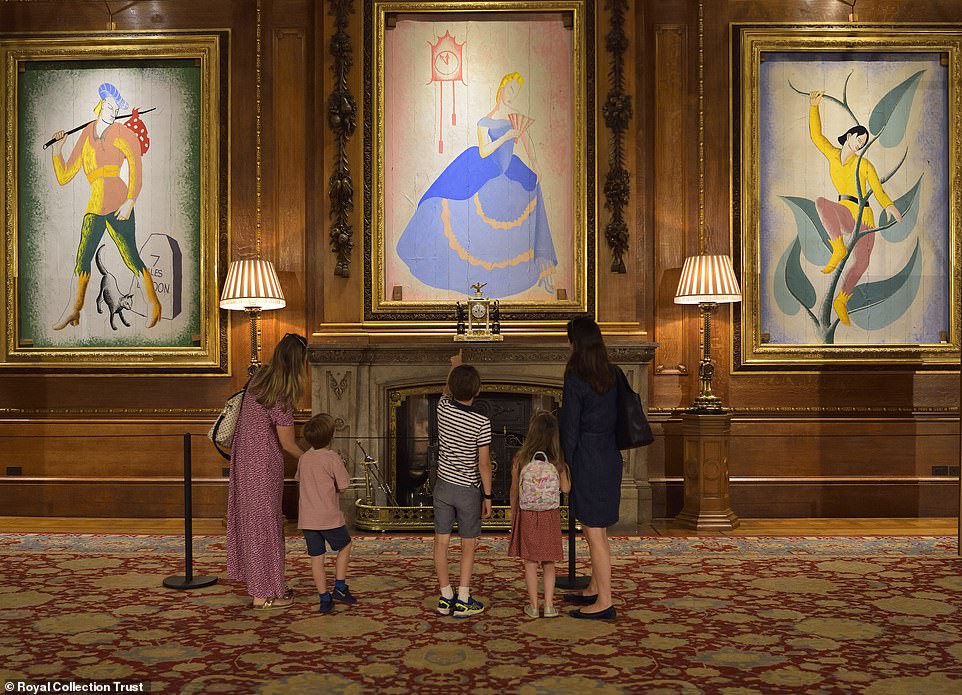 Family day out: The wartime ‘pantomime pictures’ remain on display in the Waterloo Chamber 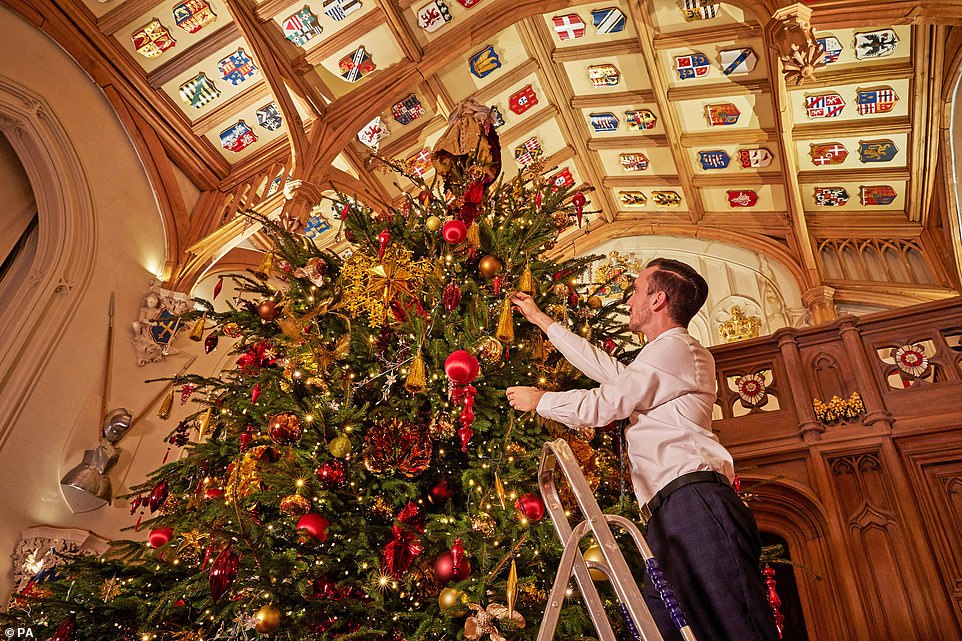 Deck the halls! A member of staff puts the finishing touches on the 20ft tree in St George’s Hall

It is understood the Queen and the Duke of Edinburgh will not take advantage of the relaxed Covid restrictions to form a Christmas bubble with other households.

It means the couple face spending Christmas Day without any of their four children for the first time since 1949, when the then Princess Elizabeth left a one-year-old Charles in the UK so she could be with Prince Philip in Malta.

Prince Charles and the Duchess of Cornwall will spend Christmas at Highgrove, in Gloucestershire, although they expect to see the Queen and Prince Philip at Windsor at some point over the festive season. Camilla will also spend time with her family. In Tier 2 regions, like Windsor, up to six people from different households are able to mix outdoors. This means the Queen and Prince Philip could meet with family members for horse riding or walks in the grounds of Windsor Castle.

Grow your own Christmas tree! How Her Majesty’s 20ft Norwegian Spruce was cut down in Windsor Great Park before being transported to St George’s Hall 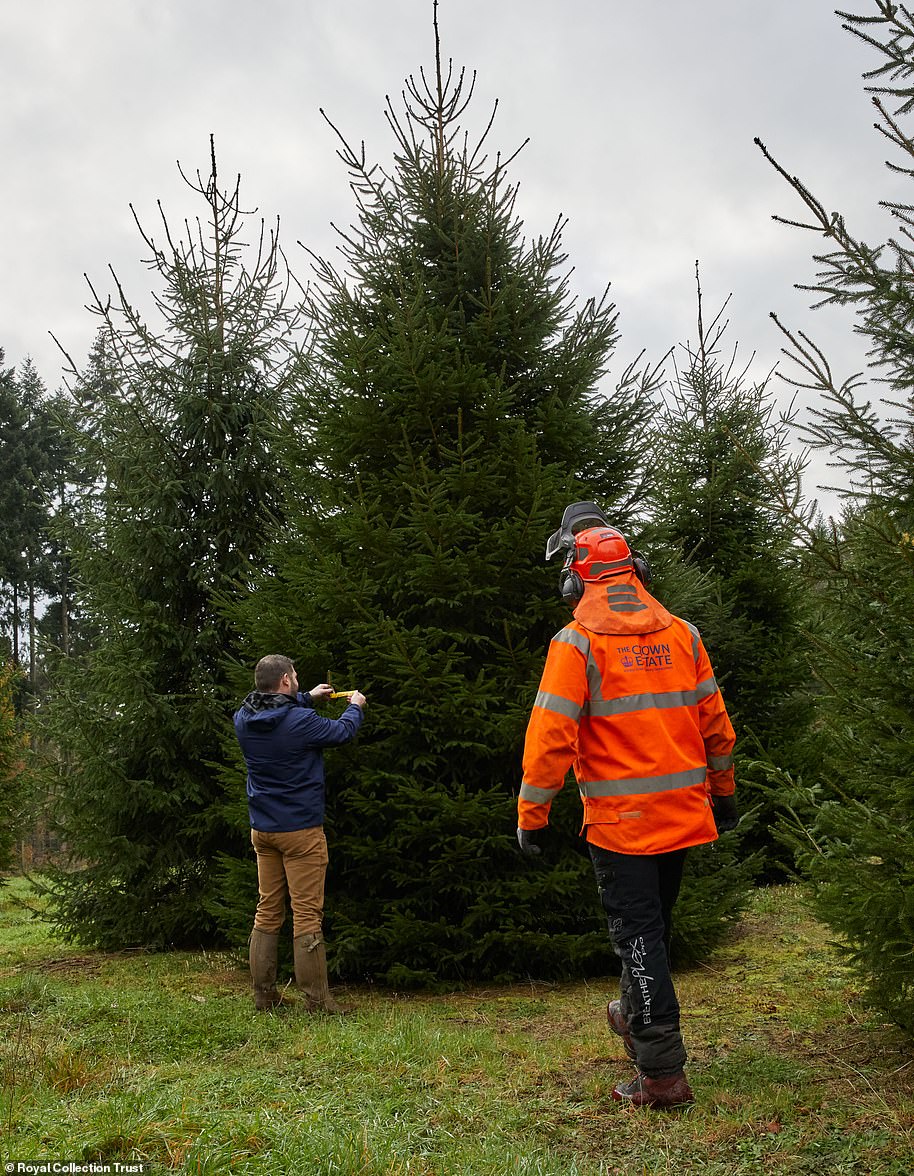 Perfect tree! The 20ft Norwegian Spruce was grown in Windsor Great Park and chopped down by palace staff 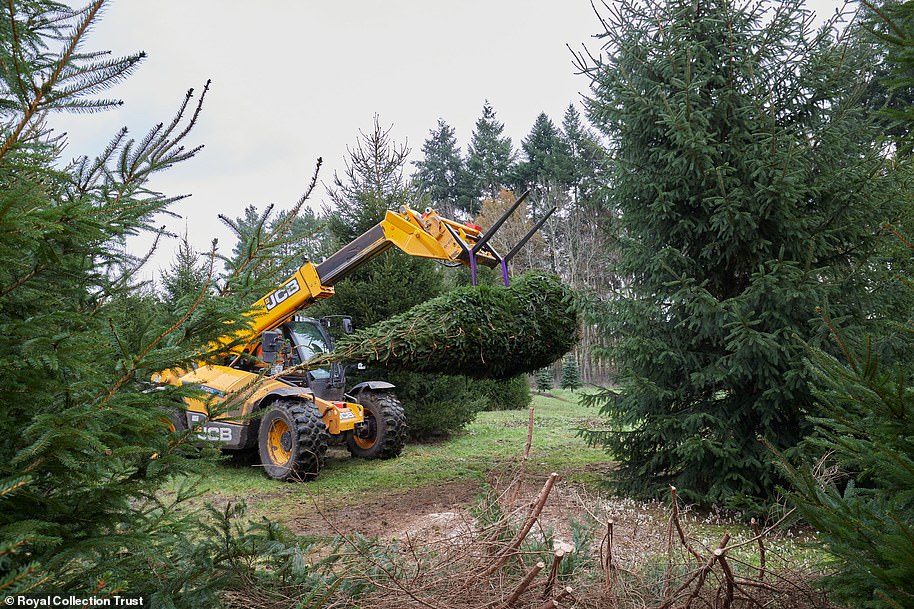 On its way: The tree is carried out of the park and onto a waiting truck, ready to be transported to Windsor Castle 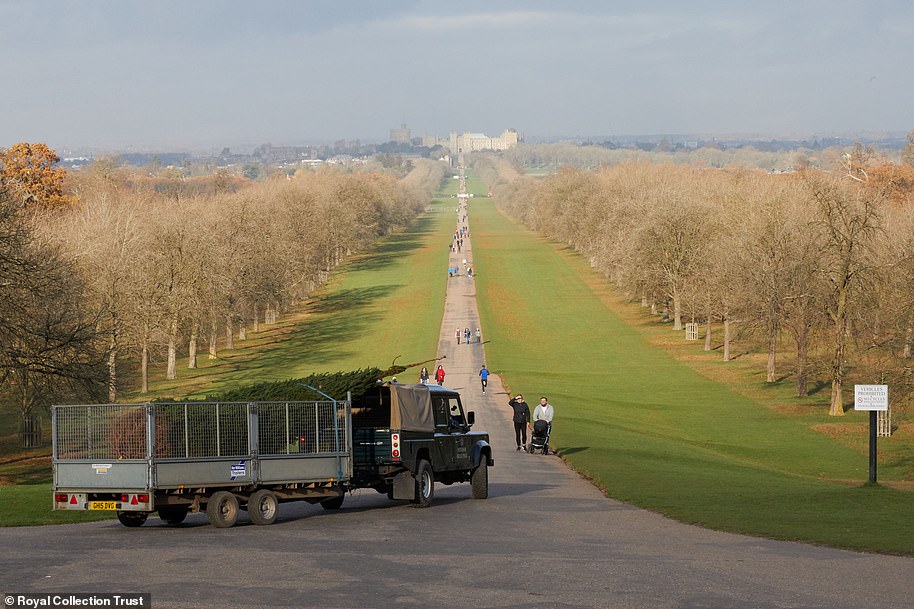 Short drive: The tree is placed on a long trailer, ready for the drive to Windsor Castle (pictured in the distance above) 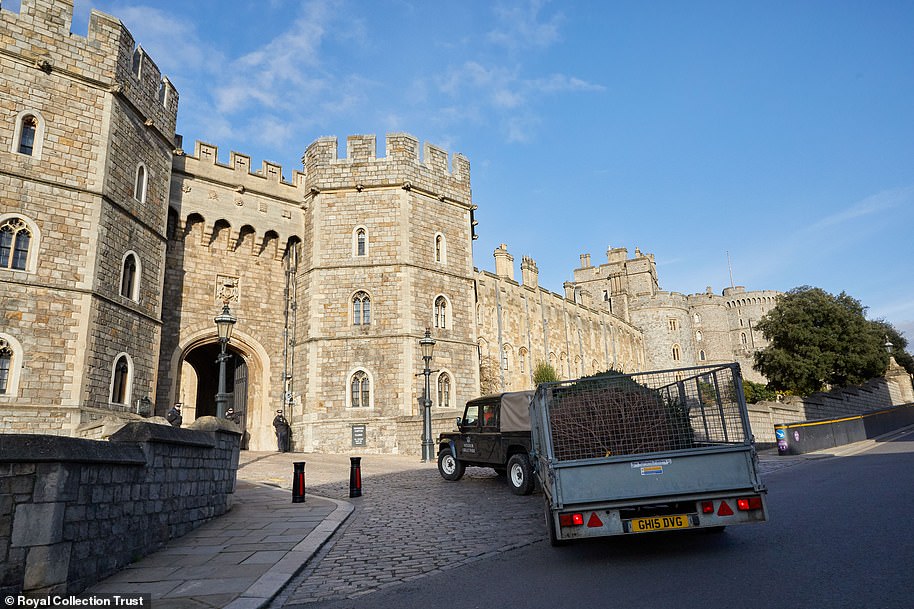 Almost there! The tree arrives at the castle, ready to be decorated by the team waiting inside the palace walls 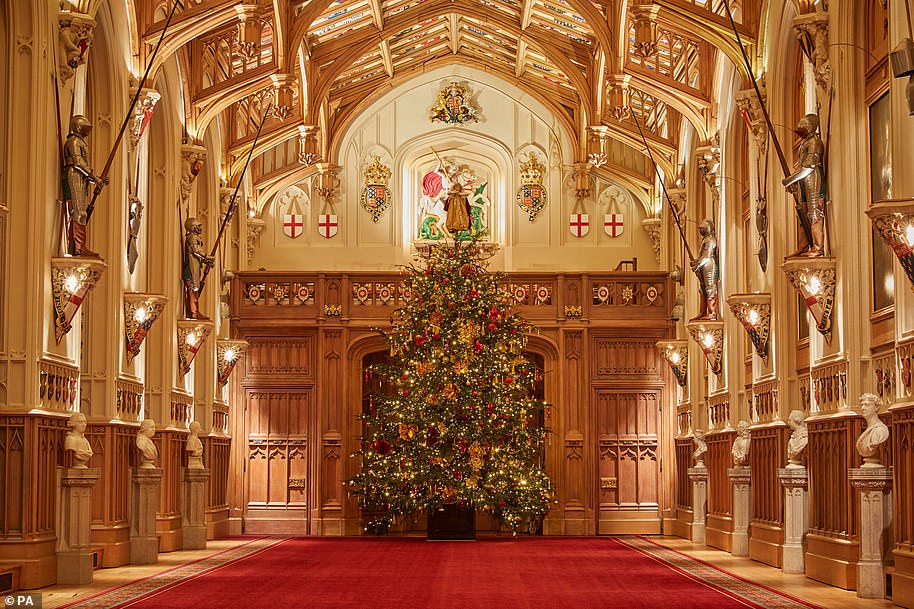 Finished result: The same 20ft tree looks completely different after being adorned with lights and decorations in St George’s Hall