On top of the long-running theory that the show is set in the same universe as Breaking Bad, The Walking Dead has kept fans on their toes with a slew of references and cryptic clues throughout its eight seasons so far. The creators of the world’s top zombie show don’t miss a trick when it comes to the details.

In anticipation of The Walking Dead dragging its undead legs into series nine (October 7, people), here are some of the most obscure Easter eggs from past seasons of the show that you might have missed…

1. And the prophet did speak 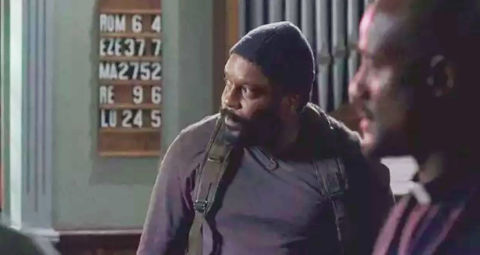 Think back to season 5 episode 2 in which we’re introduced to St Sarah’s Episcopal Church. Eagle-eyed viewers might have noticed a number of Biblical passages plastered in and around Father Gabriel’s chapel, and those who took the effort of getting the big book out were rewarded with a rather gruesome surprise:

“Therefore we are buried with him by baptism into death: that like as Christ was raised up from the dead by the glory of the Father, even so we also should walk in newness of life.” – Romans 6:4

“So I prophesied as I was commanded: and as I prophesied, there was a noise, and behold a shaking, and the bones came together, bone to his bone.” – Ezekiel 37:7

“And the graves were opened; and many bodies of the saints which slept arose.” – Matthew 27:52

“And in those days shall men seek death, and shall not find it; and shall desire to die, and death shall flee from them.” – Revelations 9:6

“And as they were afraid, and bowed down their faces to the earth, they said unto them, Why seek ye the living among the dead?” – Luke 24:5

Spot the running theme? That’s right – all of the passages either reference or hint at the undead. 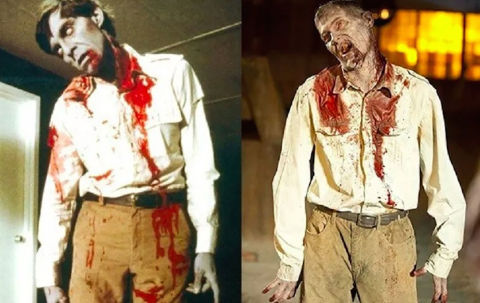 The Walking Dead is a show that owes its existence to the zombie godfather, George Romero, which is why it’s no surprise that it contains a number of homages to such classics of his oeuvre as Night of the Living Dead, Dawn of the Dead and Day of the Dead.

One of the greatest and most accurate Romero references has to be in season 3 episode 5 when an undead dead ringer for Romero’s Flyboy rocks up in the scene where Merle (Michael Rooker) fights for his life in The Governor’s (David Morrissey) arena. 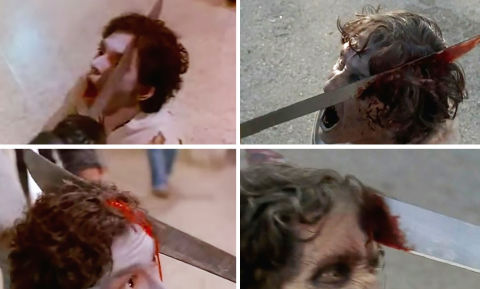 While we’re on the topic, director Greg Nicotero re-created the Dawn of the Dead machete scene in the season 5 finale, “Conquer”, as well.

4. Message for the King

As many horror shows do these days, The Walking Dead contains a subtle link to the great genre writer Stephen King. Before the zombie apocalypse hit, Rick Grimes (Andrew Lincoln) worked for the Sheriff’s Department in King County, a fictional region of Georgia that is named after the world famous author.

Original showrunner Frank Darabont is friends with King after collaborating with him on a number of movie adaptations of his work, including The Green Mile, The Shawshank Redemption and The Mist. 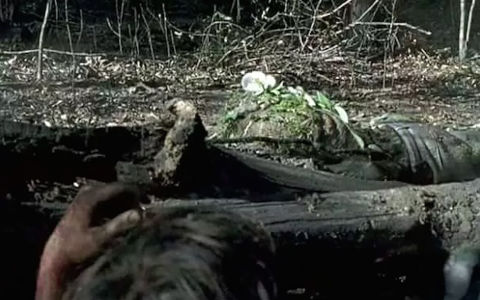 In season six when Daryl (Norman Reedus) is lost in the woods after being ambushed, the show’s creators sent a welcome symbol of hope as he comes across a mossy walker. Growing from its back is a Cherokee Rose – the same flower Daryl gave Carol (Melissa McBride) in season two to comfort her about Sophia’s (Madison Lintz) disappearance. 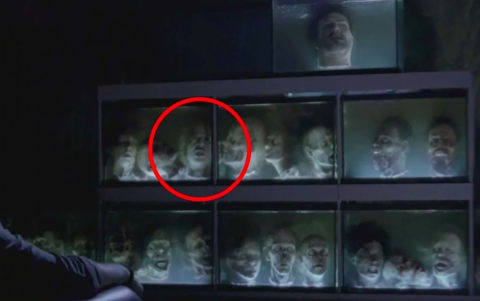 The Governor was one messed up villain – the guy even liked to store walkers’ heads in fish tanks. Speaking of which, one of the heads was an exact replica of Ben Gardner’s, the severed noggin that pops out from the bottom of his boat in Steven Spielberg’s Jaws. (Or so says Greg Nicotero.) Even the great white himself would have had trouble sniffing out that reference.

So who really started the spread of the zombie virus in The Walking Dead? Well, a number of enthusiastic fans reckon it had something to do with Resident Evil’s Umbrella Corporation. Although this crossover might seem far-fetched, the theory was hinted at in season 5 when an octagon popped up behind Michonne (Danai Gurira), one that looks suspiciously like the company’s logo. Could it be? 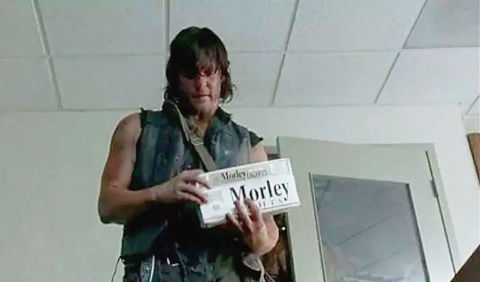 When Daryl and Carol hunt through the ruins of Atlanta searching for Beth (Emily Kinney) in season five, they come across some Morley cigarettes – a fictional brand of smokes that has a long and renowned history in TV shows over the ages, featuring in everything from The X-Files to The Twilight Zone, Friends and (of course) Breaking Bad. 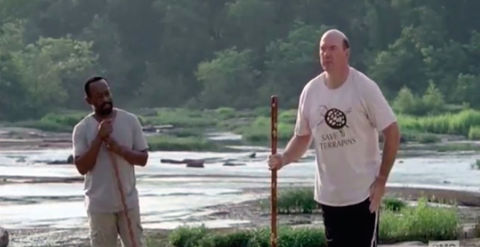 In season six, we see teen survivor Enid (Katelyn Nacon) chowing down on the innards of a turtle in order to survive. Cut to later on in the same season and, while training Morgan (Lennie James), Eastman (John Carroll Lynch) is seen wearing a “Save the Terrapins” t-shirt.

Coincidence? Former showrunner Scott Gimple apparently thinks so, although some fans even theorise that Eastman’s name is a homage to Kevin Eastman, the creator of Teenage Mutant Ninja Turtles. Which would certainly explain the tee. 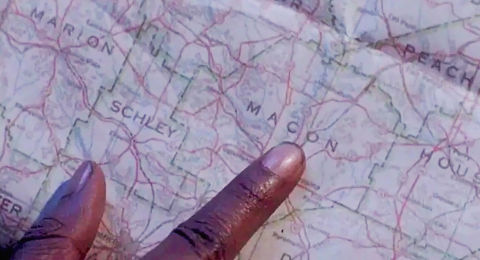 In season four, Michonne searches through a map where she hovers over an area of Georgia called Macon. Even if they never heard the reference to it in Elvis Presley’s ‘Guitar Man’, then fans of Telltale Games’ The Walking Dead: Season 1 will be well aware that this is the hometown of Lee Everett – the lead character from the game. They will also be aware that it’s a good thing Michonne didn’t end up visiting Macon, as she probably wouldn’t have made it out.