‘A male-rape movie in space’: Is Alien more relevant now than in 1979?

Few scenes in cinema are as etched in the popular mind as the moment in Alien when a phallic-shaped metal-toothed creature bursts bloodily from the chest of Kane (John Hurt), a crewman aboard the intergalactic mining ship Nostromo, before scuttling off to lurk and grow and begin killing Kane’s crewmates one-by-one.

For those who saw it at the cinema in 1979, the world was split in two: the time before the chest burster and the time after. 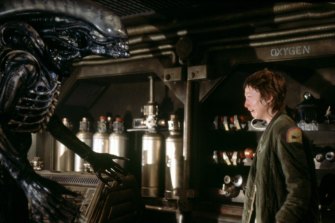 Movies would never be the same. Science-fiction had found its darkest expression. Horror had a new name – the shape-shifting, acid-dripping, all-consuming creature that fans soon labelled the xenomorph, as far from the benign bug-eyed presence of ET as it was possible to imagine.

The film spawned a franchise – three more Alien films, two Alien vs Predator spin-offs, and Ridley Scott’s more recent prequels, Prometheus and Alien Covenant – that have collectively earned more than $US1.5 billion ($A2.2 billion) at the box office, and a whole lot more on video, DVD, Blu-Ray and digital platforms. It has spawned PhD theses and endless discussion and riffs in popular culture. Earlier this year, it even spawned a high-school theatre version.

But perhaps its strangest offshoot is the documentary Memory: The Origins of Alien.

Part making-of story and part film-studies thesis, Memory (its name comes from the original title of Dan O’Bannon’s screenplay) offers what writer-director Alexandre O. Philippe calls “a deep dive into the mechanisms of cinema, the process of filmmakers, and into how and why audiences respond to certain films in the way they do”. 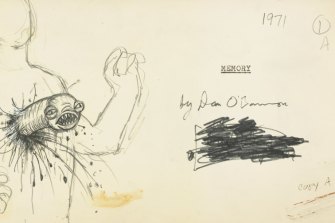 A story board sketch for the chestburster scene.Credit:Madman

We live now in a culture saturated in filmed images, but very little of it ascends to the level of shared experience, says Philippe. Game of Thrones was an exception, “but there are very few now that have these moments – like the chest burster, like the Psycho shower scene – that completely traumatise a generation. They are very rare.”

Philippe – who was born in Switzerland but moved to the US 26 years ago with dreams of becoming a professional golfer – is fascinated by these cut-through moments. His last film was 78/52, a forensic examination of the 78 seconds and 52 cuts that comprise the shower scene from Alfred Hitchcock’s Psycho. His next – which he was about to take to the Venice Film Festival when we spoke earlier this week – is a meditation on The Exorcist.

What he sees in these films is an expression not just of their makers’ intentions and talents, but of something far greater – our collective unconscious at play. 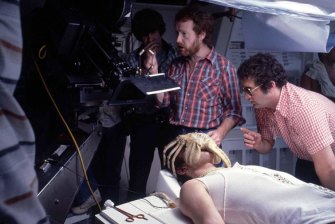 Ridley Scott (with beard) directs a scene featuring the creature in “facehugger” form.Credit:Fox

Memory traces the series of coincidences that brought its three key creative drivers – writer O’Bannon, director Ridley Scott and designer HR Giger – to the project, as well as the late decision to cast Sigourney Weaver as Ripley, a role originally conceived as male.

“You could argue that it is audiences that willed Alien to life,” he continues. “Had Dan O’Bannon, Ridley Scott and HR Giger not been on the frequency for that myth, someone else would have had to be. When you look at the number of coincidences that happened for Alien to be Alien you have to wonder if there were greater forces at work.”

The thing that most desperately needed to be expressed, he argues, was a challenge to the “patriarchal imbalance”. Kane’s “rape” by the alien – by the face hugger that latches onto his face and inserts its egg via a tube shoved down his throat – and the shocking experience of “birthing” the alien through his chest “jolted people into a feeling of unease”, he says. 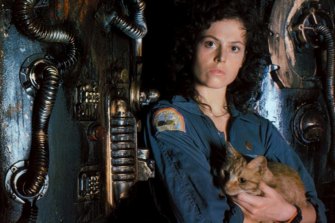 Sigourney Weaver as Ripley, a role that has become a feminist landmark but which was originally written as male. Credit:Fox

“There were things that happen to women that were suddenly transposed to Kane,” he continues. “I don’t think that was being processed consciously – I don’t think the studio was thinking, ‘Oh yeah, here’s $11 million, go make a male-rape movie in space’. I don’t believe O’Bannon, Giger and Scott were thinking along those lines either.”

But they were images and ideas that we needed to see in order to deal with the underlying tensions in our culture, he believes.

“What makes Alien so amazing is that it took 40 years for society to process and to start having a dialogue about those images and ideas,” he adds. “Alien is, in a way, much more contemporary today than it was 40 years ago.”

Memory: The Origins of Alien is on limited release.