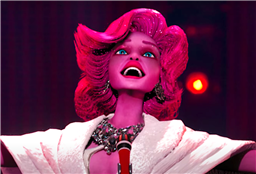 Welcome to the future of TV singing competitions.

Fox has unveiled a sneak peek at the new series Alter Ego — debuting Wednesday, Sept. 22 at 9/8c — that the network is billing as “the world’s first avatar singing competition.” In it, aspiring singers perform in front of a panel of celebrity judges… not as themselves, though, but in the form of a digitally animated avatar and “showcasing their unique performance style via motion capture technology.” It’s sort of The Masked Singer meets The Voice with a dash of The Sims, plus a sprinkling of Black Mirror for the dystopian sci-fi vibes.

In the first look, which you can watch above, we meet some of the singers behind the avatars, who explain how this show gives them the freedom to express themselves in a way they never could as themselves. They’ll be strapping on elaborate motion capture suits and performing in front of a live audience as well as a judging panel stacked with music veterans: Nick Lachey, Alanis Morissette, will.i.am and Grimes.

“This is unlike how we’ve seen people perform ever, in the history of television,” Lachey observes. But maybe will.i.am puts it best: “This is nutty-nuts.”

Press PLAY above for a sneak peek at Alter Ego, and then drop your first impressions in a comment below.