Andrew Neil, 71, was on hand to offer his opinion on the day’s headlines on This Morning, with Extinction Rebellion leading the agenda. Outrage has been caused after two members of the group trampled over Poppy wreaths and held up a banner which read Honour Their Sacrifice, Climate Change Means War at the central London location. However, as the broadcaster slammed the actions of the eco-warriors, host Phillip Schofield, 58, asked him if he was a “climate denier” which soon led to a heated clash between the pair on the ITV show.

Making his point about the protest, Neil said: “I think what they did was wholly wrong and they had no right [to do this].

“We put politics aside and we come together to remember those who gave their lives so we could be free and they have no right to do what they did at all.

“I’ve interviewed Extinction Rebellion on several occasions and most of what they say is total nonsense or total exaggeration.”

Schofield then referenced an interview with protester Donald Bell on Good Morning Britain who tried to justify his actions and explained his opinion that climate change could spark wars.

“There’s no evidence of that,” the journalist hit back, with the presenter asking: “Are you a climate change denier?” 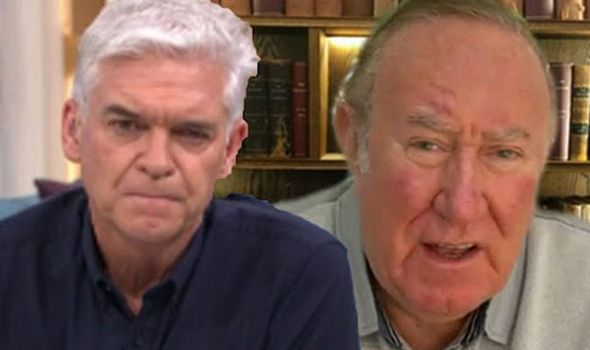 The pair spoke over the top of one another for several seconds before Neil then laughed at the host’s line of questioning.

“That’s just typical. The moment you question Extinction Rebellion you’re a denier. No, I’m not a denier but I don’t buy the agenda.

“There is no evidence climate change will lead to war,” he added, before stating he did believe in the global issues.

However, he claimed there was a time and a place, commenting: “Climate change has its day on the agenda every day and so it should.”