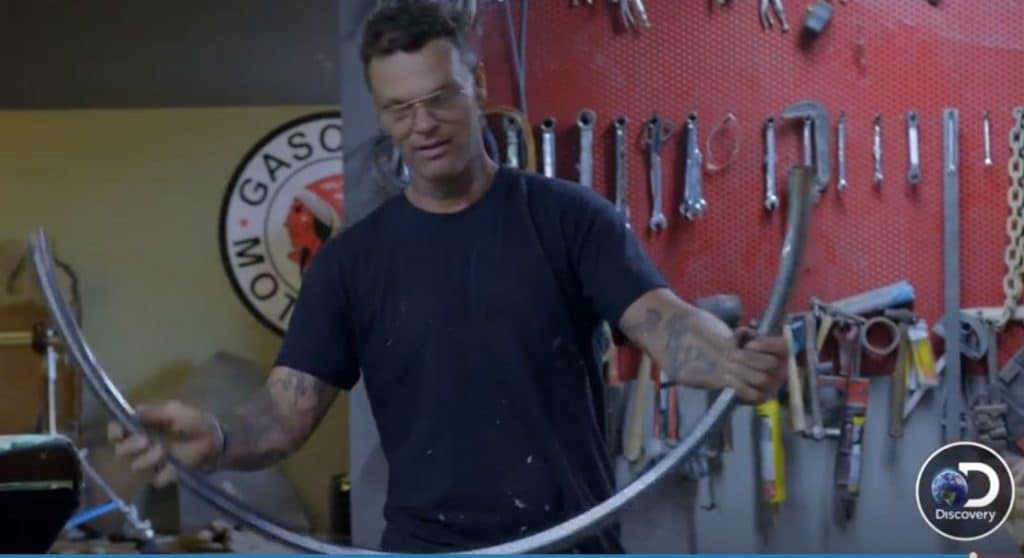 Bad Chad Customs star Chad Hiltz has a knack for seeing metal scrap re-imagined into car rebuilds. That skill is on full display on the finale of Bad Chad Customs on Discovery, where out exclusive clip demonstrates how this savvy Canuck turns trash into cash.

If you do not know what a Mandrel bend is, you will as we learn they “cost lots of money” and are hard to find.

Chad is psyched to figure out what his design will incorporate, and its in his back yard.

He says, “This car is not going to have any doors so it’s going to be hopping. So I need something to shape the entry on both sides.”

“I have had this shower rod it’s been out there for a while… we were hanging t-shirts on it for a bit, I said we are just gonna keep it because it has some nice bends in it you know? I think that might be it. We are gonna take it a find out.”

He adds, “That’s a mandrel bent corner. I never get that corner. We cut and cut and cut…A Mandrel bend is when you bend the metal and you make no kinks, you stretch it and bend it.”

“When you bend it the other way, sometimes it stay in shape. It kind of kinks when you do all that stuff. A Mandrel bend costs lots of money. But on this shower curtain rod, the Mandrel bend is already bent.”

Explaining his design further he says: “I am using this shower rod for the intake of the door, the radius of the door bend, its perfect. All I had to do is cut it out of there. That’s what happens when you are building stuff, that’s recycling right there…that makes me happy right there, just like that, boom!”

So what is a Mandrel bend?

According to Bob’s Muffler:

A mandrel is a steel rod or linked ball inserted into the tube while it is being bent to give the tube extra support to reduce wrinkling and breaking the tube during this process.

Make sure to tune in tonight to see what the heck a car with a shower rod for a door build looks like and we hope that Bad Chad Customs will return fora season two!

Bad Chad Customs airs on Tuesdays at 10/9c on Discovery.