We knew that not everyone would survive this final season of Better Call Saul — and this week, it was Nacho Varga’s turn to say goodbye.

Monday’s episode was a remarkable showcase for costar Michael Mando, as a resilient Nacho dodged certain death long enough to strike a deal with Gus to turn himself over to the Salamancas — in exchange for a promise that his father remain unharmed. (He also had an emotional phone call with his father, never telling him how much danger he was in.) Nacho was roughed up and brought before the Salamancas, where he tore into Hector in a scorching final monologue, even admitting he put Hector in that wheelchair (!). He also broke free and grabbed a gun, holding Juan Bolsa hostage… before putting a bullet in his own head, closing the book on one of Better Call Saul‘s most compelling characters.

TVLine reached out to Mando to get the inside scoop on Nacho’s swan song, and he told us all about hiding in that oil tanker, delivering that final speech and getting a truly triumphant send-off: “I think you couldn’t ask for a better ending,” he says. 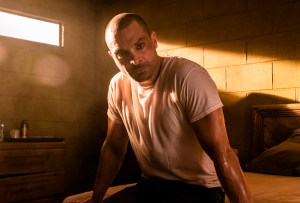 TVLINE | How far into the series run did you know what Nacho’s ultimate fate would be?
Vince [Gilligan] and Peter [Gould] called me that winter before we started shooting [Season 6], with Melissa Bernstein on the line, and they told me they have this larger-than-life, operatic ending for Nacho and that they couldn’t wait for me to read it. They said it was going to be very heroic, and it was going to break the internet, and I just felt an immediate sense of gratitude. We exchanged a lot of nice words because we knew it was all coming to an end, and it was a season of endings. I just was really excited and very grateful.

TVLINE | Early on in the episode, Nacho hides in an abandoned oil tanker, and he submerges himself in this pool of oil to evade the Cousins. What were you really under there, and how long were you under for?
It’s kind of like a vegetable thing that they’ve extracted. I was there for maybe a minute or two, I think, under the thing. What was fun about that scene in the oil tanker was the one I jump in was a real one, and then the moment I jump inside, we’re back in the studio, and we’re shooting in this beautiful set that the crew had built. Shout-out to the crew.

I mean, it was a beautiful episode full of unbelievable symbolisms. You know, if you zoom in on Nacho’s shirt, the last meal, the last goodbye… it was just a gorgeous sort of meditation about what life meant to this character, and what he was willing to stand up for.

TVLINE | The scene with Nacho on the phone with his dad: It’s like they both know what’s about to happen, but they can’t really say it. What kind of emotions was Nacho going through in that scene?
Nacho was free at that time. He was looking at the sunset, and he looked back, almost like the tale of Orpheus descending, and said to his father: “Come with me.” Nacho knew in that moment that it was either he escapes and his father gets killed, or he comes back into hell, faces these demons in the eyes and sacrifices himself for his father. And that’s how he makes that decision in that moment. 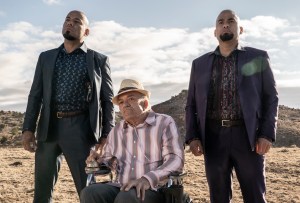 TVLINE | Nacho has that great final speech and gets a chance to tell off Hector Salamanca in his final moments. It looked very satisfying for him. Was it satisfying for you to deliver?
That moment, to me, had a lot of subtext to it. I think Nacho was really, in a way, standing up for his community, and he felt that his community was more the integrity and virtue of his father. He was swearing allegiance to that and standing up to the cartel. That, to me, was such a noble moment full of integrity, where so much was being said in the subtext of it, and I thought it was just beautifully written by [executive producer] Gordon Smith.

TVLINE | Nacho does manage to break free, and he grabs a gun and holds Juan Bolsa hostage. But then he turns the gun on himself. Was that just his way of controlling his own destiny, and kind of going out on his own terms?
Well, he has made the decision, firm and sound, that he was going to exchange his life for his father. And if you go back to the beginning of Season 1, Nacho has always kept his word with Mike. He’s been utterly loyal to Mike. At the end of Season 5, his gesture is a brave heroic gesture of loyalty, where he [goes] against the cartel to swear allegiance to Mike. He’s always been loyal. In that moment, he’s just true to his word.

TVLINE | Well, it’s a great showcase episode for you and for Nacho. Do you feel like you got a fitting send-off at least, even if he had to leave early?
I think you couldn’t ask for a better ending. You know, this character ended up being a dream role for me. Such a heroic and symbolic figure of sacrifice and courage. I wouldn’t change an iota. I’m just so eternally grateful for it.

It’s more important why you go. We all go. We all transcend. I think it’s important why we transcend and how we transcend, and how we feel about our lives. And Nacho, in that moment, has zero regrets. It’s actually the most Zen we’ve probably ever seen him, because he knows who he is. For the first time in his life, he has a clear image of himself.

Better Call Saul fans, drop your thoughts on Nacho’s grand finale in a comment below.