The Breaker Upperers review: It's not perfect, but it's a fresh take on stale comedy

Coming up with a new idea in comedy isn't hard. But it's nigh on impossible in movies, where everything has been done, redone, rebooted, relaunched and regendered to star women instead of men or vice versa. 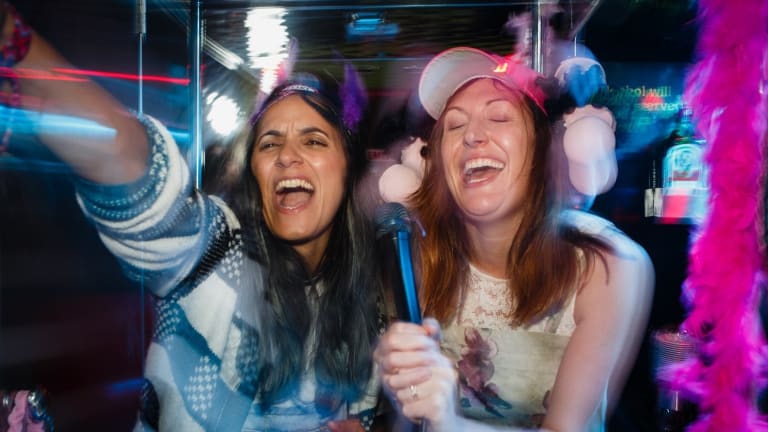 Madeleine Sami and Celia Pacquola in the screwy but truthful comedy The Breaker Upperers.

Filmed comedy probably reached its zenith between the first and second World Wars, in fact, with Chaplin and Keaton in the silent era, and the films of Ernest Lubitsch and Preston Sturges in the first decade of sound.

That's not to say it has been going downhill ever since: there have been lots of great comedies since 1945. It is to say that all of them owe a great debt to the early giants, whether in physical comedy, sight gags, the use of fast dialogue or questions of timing.

It doesn't matter whether you've seen all the greats: everyone copies them anyway, often without knowing. That may be why so many comedies are kind of stale. Recycled situations, familiar techniques, lazy writing.

The Breaker Upperers is less than a perfect comedy. There's not much to it, but to borrow from Spencer Tracy in Pat and Mike, "What's there is cherce". It makes up in freshness what it lacks in technique. 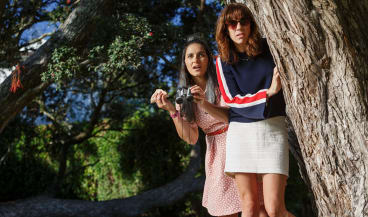 Madeline Sami and Jackie Van Beek star in Kiwi comedy The Breaker Uppers, which they also wrote and directed.

An original idea will carry an audience to the moon and back, even if the rocket feels a little rickety, and this one is fuelled by sardonic, even cynical views about modern love and relationships. The fact that it's made by two women is important: they bring the heartbreak, as well as the sense that life is fundamentally ridiculous. They bring the fresh.

Jackie Van Beek and Madeleine Sami wrote and directed it, on debut. They are also the stars. Taika Waititi (Boy, Hunt for the Wilderpeople) helped to produce it, which probably means he helped convince the money that these two comedians could handle the triple roles: writing, acting, directing. 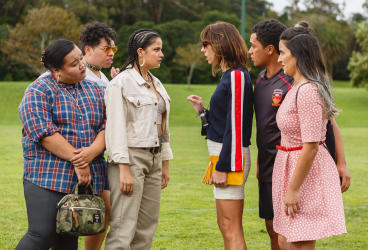 The Breaker Upperers, right, Jackie van Beek in striped top as Jen and Madeleine Sami in pink dress (Mel) with James Rolleston (James) as they confront his girlfriend Sepi (played by Ana Scotney).

In the important areas, they do. It's funny. A lot. Enough that it's easy to ignore a few problems with pacing, characterisation and the occasional moment where both of them look to be having trouble keeping a straight face.

Mel (Sami) and Jen (Van Beek) run an agency for people who need help to break up. They have a series of offers: they might impersonate two cops who arrive to tell a girlfriend that her boyfriend has been killed/drowned/gone missing. In fact, he is sitting in their car across the street as the no longer loved-one collapses in tears.

Or they might appear at your door in country and western costumes, delivering a break-up song from hell. They will do gay or straight break-ups, no problem. These early scenes have a quick-fire, no nonsense directness. Jen has no time for feelings: she's seen too much. She likes to get in, get out, and not get involved with the client or their unintended.

Of course, life intervenes. Jordan, a 17-year-old boy (James Rolleston), comes into their office. He wants to ditch his girlfriend, a tough Maori chick called Sepa (Ana Scotney). Mel falls instantly for Jordan, which breaks up the film's primary relationship – the platonic friendship of the two breaker upperers, Jen and Mel.

There is some sharp observation in the writing: a sense of how hard it is to find someone to love, and to stay loved, in modern times. That's the fresh part, the insistence that romance needs to be redefined and broadened. It's a rainbow kind of comedy, in that sense, but not in a hectoring way.

Whenever Sepa appears, she's backed up by her gang of grrrrl-power homies, all glaring like they're in a pop video. The comedy is broad in execution, sometimes to the detriment of the flow. That means the directors get a little lost in the middle, when the movie feels more like a series of sketches, but these are quibbles.

What resounds is a sense of screwy but truthful modern comedy: that it's a jungle out there in dating land, whatever your preference.

There's also the lovely, understated Kiwiness of the comedy, which remains distinctive and self-deprecating. It's something to do with isolation, in a country hanging off the bottom of the world, with a population of strange birds, taciturn men in gumboots and puzzled but practical women.

New Zealand women have hardly begun to speak in filmed comedy, but this kicks the door open.