It wouldn’t be the return of CinemaCon in full force without the cheerleaders. As exhibitors, distributors, and press trooped back into Caesars Palace in Las Vegas, it didn’t take long to get some dramatic data points about the true power of theatrical releases.

Cinépolis CEO Alejandro Ramírez Magaña, who oversees the world’s fourth-largest theater chain, had a message for studio execs sitting at front-and-center reserved tables: The best way to avoid piracy is a healthy and exclusive theatrical window. On the flip side, day-and-date streaming is perfect if you want your film to be pirated — it’s virtually a guarantee for illegal downloading and a loss of revenue. And: He brought receipts (and his corporate communications team sent them to IndieWire).

Day-and-date continues to be a highly unpopular strategy among the exhibitors at CinemaCon. Marvel’s “Black Widow” went day-and-date in theaters and on Disney+ on 2020. Ahead of its merger with Discovery, Warner Bros. decided to premiere its entire 2021 theatrical slate on HBO Max day-and-date.

Decisions like these not only destroyed exhibitors’ bottom lines, Magaña said during his International Day keynote address, but they also provided plenty of plundering opportunities. With one exception, every day-and-date release during Covid hit TorrentFreak’s “top 10 most pirated” during their respective launch weeks. The outlier, “Boss Baby 2,” took all of one week to reach the undesirable list.

By comparison, just one film with an exclusive window, “Spider-Man: No Way Home,” made the top 10 list in the same week as its exclusive theatrical release. Since the 2021 “Spider-Man” earned nearly $1.9 billion at the worldwide box office, exhibitors are more easygoing on a little Peter Parker piracy.

“Big films with big budgets need a theatrical release to recoup such investments and to make the huge profits they’ve made in the past,” Magaña said. “The second certainty is that the day-and-date model of releasing films simultaneously in theaters in streaming is a recipe for… lost income both for distributors and exhibitors alike. The main beneficiaries for the day-and-date release model are the pirates, who are given access to a pristine copy of a movie in nearly every language on day one.”

His argument makes sense, to a point. Pirates generally rip the files meant for a streaming service, and not the encrypted DCPs (digital cinema print) headed to your local AMC. Otherwise pirates have to go old school and use a video camera or iPhone to film the cinema’s 40-foot-high projection. No one wants a sloppy copy — except for Spider-Man superfans, it seems.

Magaña shared some particularly damning evidence relating to “Black Widow.” In a survey of 25,000 “Black Widow” viewers, a whopping 40 percent watched the Scarlett Johansson blockbuster via piracy — about the same as the number that saw it in theaters. That’s a lot of sunken treasure for theater owners. Just 19 percent of survey-takers watched via Disney+. Magaña was able to damn pirates, streamers, and studios all in one slide. 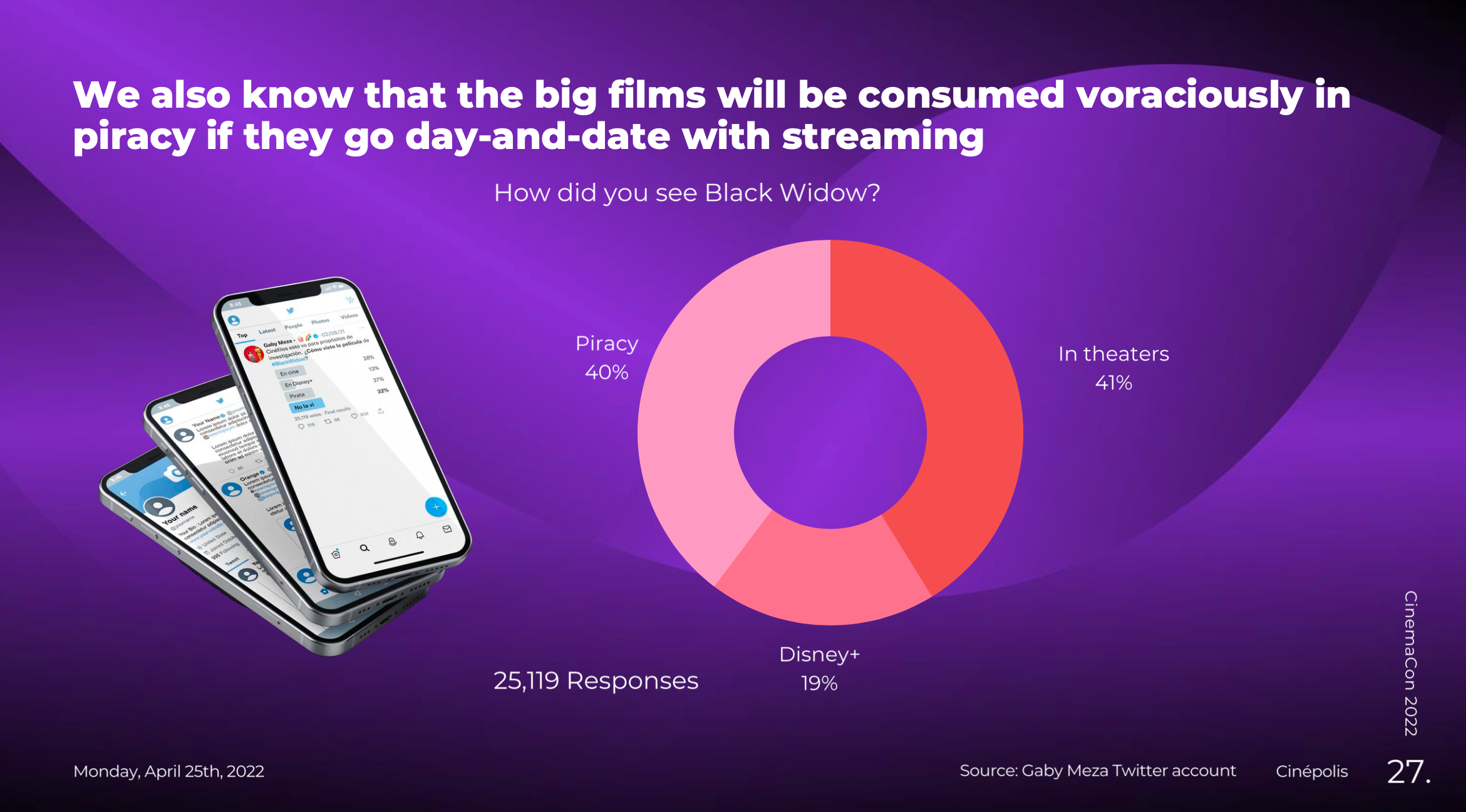 Cinépolis data on “Black Widow” piracy, as presented at CinemaCon 2022.

At another panel, Andrew Cripps, Warner Bros.’ International theatrical distribution president, said “piracy has become a bigger issue.” One reason Warner Bros. released “Dune” in Europe five weeks before the U.S. was to delay the film’s digital availability — in the U.S., it was released day-and-date on HBO Max.

“Batman was our first film with a 45-day window, after the day-and-date” experiment with last year’s slate, he said. “There are no pristine digital copies available. We’ve lived with piracy for a long time. Camcorders are available, but I think consumers are getting increasingly choosy about the kind of pirated copies they will watch. They are waiting for pristine digital copies of movies.”

Cripps was joined by “Dune” director Denis Villeneuve, who Zoomed into Caesars from Bucharest, where he’s working on the sequel to the sci-fi epic. Villeneuve offered an enthusiastic endorsement of the theatrical experience, which got the biggest applause of the morning.

Steven O’Dell, president of international distribution for Sony Pictures Releasing, went existential during his own keynote on Monday. The theatrical experience is an unrivaled collective experience, he said, suggesting that it can aid in the ongoing mental-health crisis exacerbated by COVID-19.

O’Dell cited a CDC study that showed mental-health issues among teens, a key box-office demographic, have jumped from 26 percent to 44 percent since 2009. The rise of social media, he said, has “come at the expense of real human interaction” which “we long for.”

“The virtual world can be a lonely place,” he said. “Humans weren’t designed to function to way. Civilization wasn’t designed that way.” However, civilization did design movie theaters.

“It’s been wonderful to see the audience, which so badly needs social interaction, respond so enthusiastically to our industry since last summer,” O’Dell said. “The need for shared experience is true for all of us.”

O’Dell cited studies in the field of longevity that found community and social interaction are as important to our health as diet and exercise. He called the cinema experience “perhaps the only collective leisure activity that can have people sitting in almost identical environments all over the world, at the same time, to share the same experience.”

He described that capability a theatrical “superpower,” citing the success of K-pop band BTS documentary “Break the Silence;” its $9 million global gross was a bright spot of the decimated 2020 box office. “BTS Permission to Dance on Stage — Seoul: Live Viewing” grossed $32.6 million worldwide as it went head-to-head with “The Batman.”

To punctuate his point, O’Dell then kicked things over to Quentin Tarantino. Well, he threw it to a November clip of Tarantino on “The Late Show With Stephen Colbert,” when the “Once Upon a Time… In Hollywood” writer-director made clear his feelings on the movie-theater experience. Watch the video below; the part we got in the room comes just after the 3:30 mark.

CinemaCon kicks off in earnest this evening with a Sony Pictures presentation of its upcoming releases. A pool party will follow — it’s still Vegas. 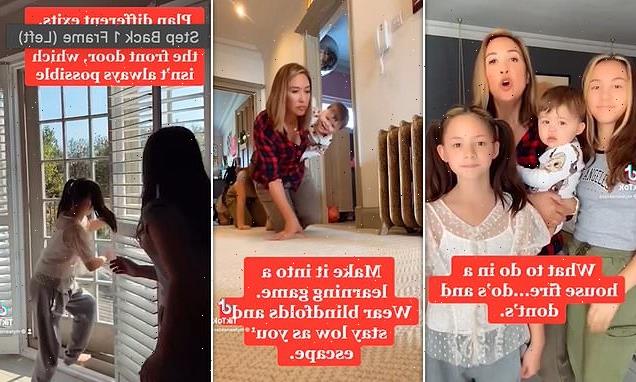 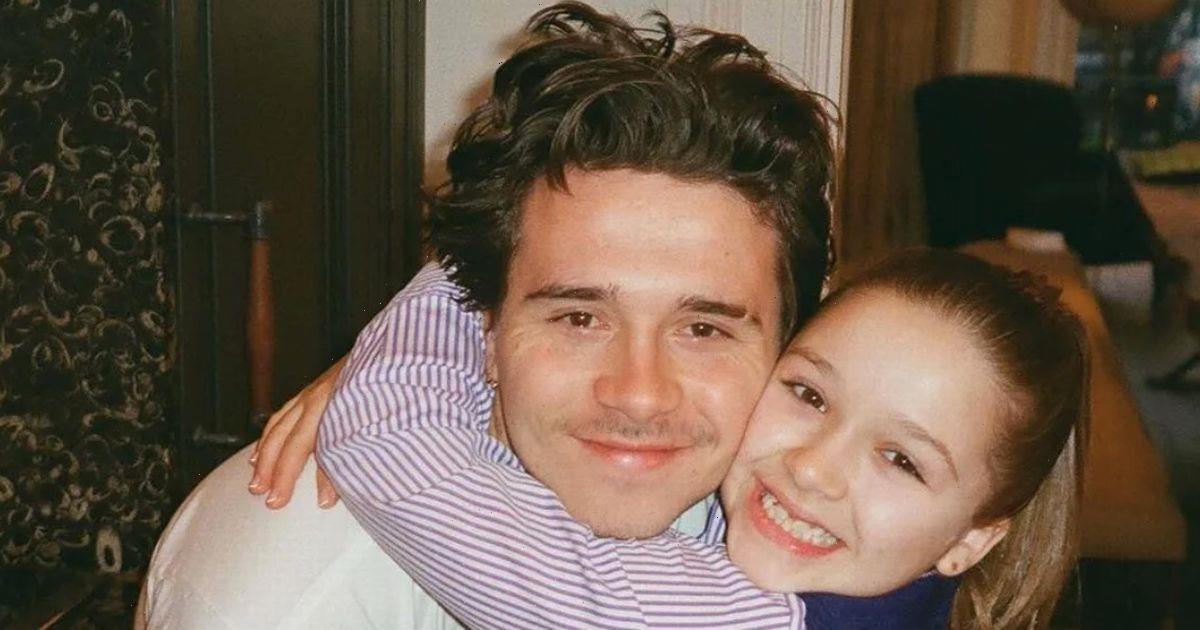 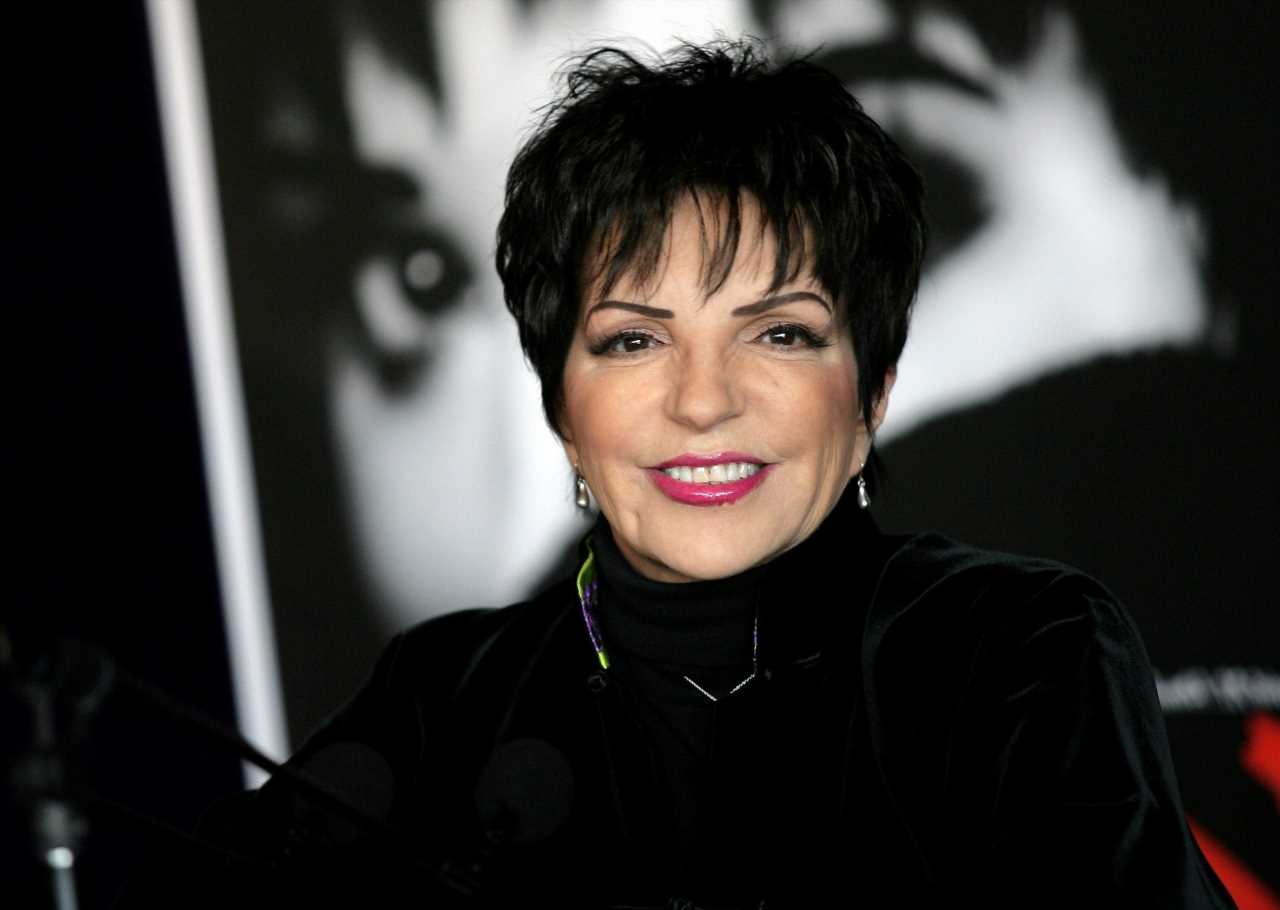