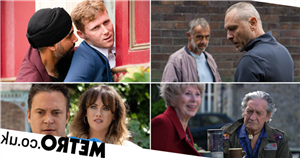 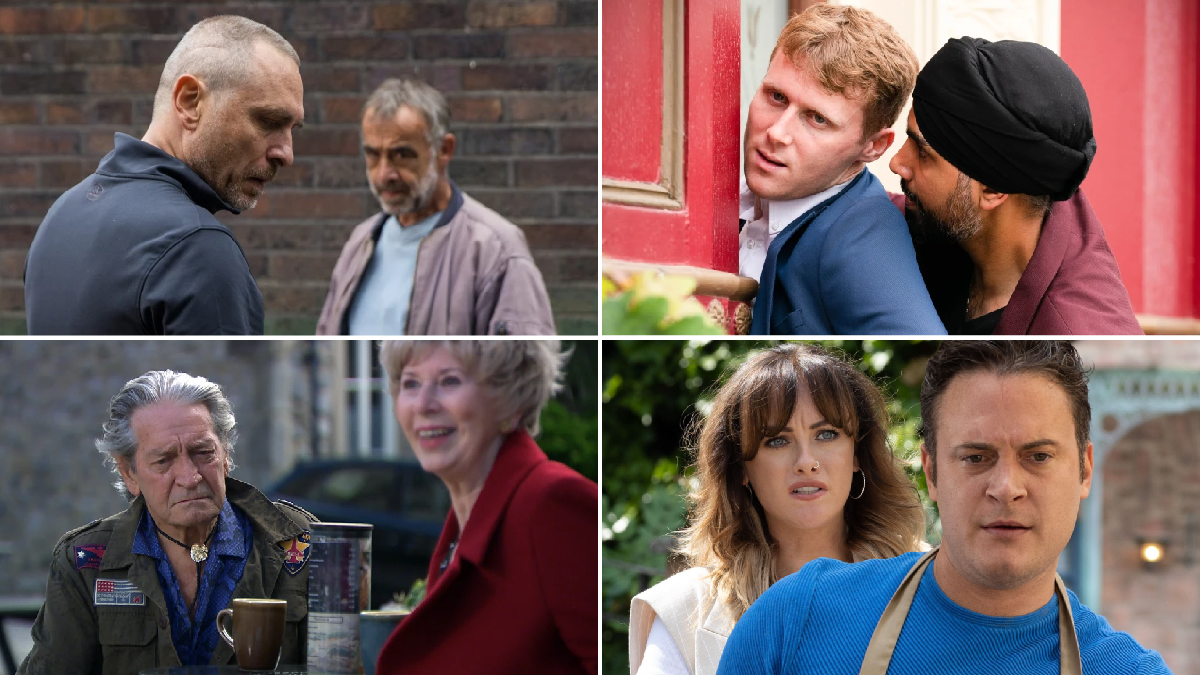 There are confrontations aplenty in the soaps next week, as some demand answers while other defend their loved ones.

Nina Lucas is hellbent on getting justice for Seb Franklin, and thus she sets out to destroy Corey Brent in Coronation Street, and when her attempts to do so backfire, she promises to kill him!

EastEnders’ Jay Brown, meanwhile, is determined to stick up for Honey Mitchell when he finds out the truth about Suki Panesar trying to kiss her, but he ends up antagonising Kheerat.

Can’t wait? No need to panic, as we’ve picked out 25 must-see moments to tide you over until Monday!

1. Nina discovers Corey has been named in the opening line-up for County. She vows to name and shame him, and therefore she takes to social media, branding him a murderer, but she later regrets her actions, as he plays the victim. Kevin meanwhile, shows her Corey’s post-match conference, and she declares she wants to kill him! Nina is given opportunity when she sees Corey in Seb’s memorial garden while out for a drive. Will she take action?

2. Kevin is concerned for Abi, realising that no-one has heard from her in weeks. He leaves a new voicemail message, pleading with her to get in touch, and afterwards, he reports her missing. However, he’s soon notified of a cash withdrawal from their joint account, and thus visits The Dog and Gun with a photo of Abi, hoping to find her. He encounters Seb’s dad Tez at the bar, but Tez claims he hasn’t seen Abi. Will Kevin believe him?

3. Sabeen tasks Imran with locating Sharon. Imran grills Simon, who willingly hands over the phone that Harvey gave him for the drugs drops, and he passes it on to Sabeen.

4. Daniel offers Max help with his course work, but Max throws the offer back in his face. When Daniel mentions his concerns regarding Max, Summer offers to mentor him and Daniel reckons it’s a great idea. Summer does her best to teach Max about atomic structure. When Summer uses a football pitch analogy, Max suddenly takes an interest and David listens, encouraged by what he’s heard.

5. Zeedan makes the mistake of telling Debbie about his promotional tasting night. The local food critic arrives at Speed Daal, but Alya and Yasmeen are concerned when none of their bookings show up. Zeedan, however, knows full well what’s happened!

6. Jenny pushes Daisy to serve Leo, a handsome bloke who enters the pub. Leo later joins both Jenny and Daisy in the back room to sample some beers, but it’s clear Daisy isn’t interested in him and thus she heads off to bed!

7. James receives an apology letter from the police, upholding his complaint. PC Brody calls at No. 8 to apologise, but insists he’s not a racist. James explains that he made a judgment call based on appearance, and thus urges him to do better.

8. Honey tells Jay she can’t go to Miami with Janet, but Jay suspects that Suki is to blame. She finally admits the truth about the kiss, and Jay spills the beans to Kheerat, who holds him up against a wall! Suki later pays Honey a visit. Honey explains that she’s got nothing to be ashamed of, but Suki retaliates by slapping her across the face, before threatening her!

9. Dotty’s noughties event at the club gets off to a great start. Rocky scores Sonia a VIP invite, but things take a turn when a drunk woman turns up, and asks after Kirsty. The penny drops for Sonia, who introduces this woman – named Sandy – to Dotty. It’s her mum!

10. Martin wants his stall back, but Peter tells him it’s the chippy or nothing at all. He accepts, and Sharon later offers him some words of wisdom, telling him that he’s doing what he has to in order to support his family. Martin, however, struggles to get along with Peter, and complains about him to Zack. Zack grabs Peter’s tablet, and later, Peter finds it battered at the chippy!

11. Tiffany vents to Sonia about Keegan freezing their bank account. Keegan, meanwhile, begs Tiffany not to take half his stall. He later joins Bernie and Karen in the Vic, and reveals that he’s been in touch with Keanu, who has said he can stay with him for a while as he needs to get out of Walford.

12. Bernie and Keegan ask Rainie to do a drugs test. Rainie panics, telling them she took a sleeping tablet the night before. Bernie is worried that Rainie is using again.

14. Bobby has a peace offering for Dana, but she’s not interested.

15. David suffers a terrifying flashback of the siege, but Victoria helps him, and they share a tender moment, which is spoiled by Meena’s unannounced return. Meena bans Victoria from seeing David, and decides to take charge of his medication. He’s been prescribed super strong painkillers to ease the discomfort of his injury. Meena replaces them with paracetamol, and does her best to trigger his anxiety. The killer smiles, pleased to have him where she wants him.

16. Paddy does everything he can to try and convince Marlon and Chas to accept Al’s offer to buy into the pub. Chas, however, isn’t keen, playing hardball with Al. However, she ultimately tells him he can have a third. Will he accept?

17. Charles is shaken when he receives a mysterious message on his phone. He rejects a phone call, and Harriet later catches sight of a disturbing text. Charles, however, has no intention in confiding in her about the harassing texts. He decides to make a call, telling his tormentor to stop hounding him, and later he has a meeting in the woods. But who is this mystery person?

18. Rodney is hellbent on winning back Diane, and when Diane overhears Belle slagging off her management skills, she’s left upset. Rodney asks to move in with her, and she agrees, but after a drunken night together, she’s filled with regret.

20. Faith is self-medicating to cope with the pain of her arthritis.

21. Brody’s funeral approaches, but there’s a cupcake delivery that reeks of Summer! Sienna confronts Liberty and Damon about their lack of action, but Damon retaliates, making yet another dig at Sienna. He then takes shocking action, and his words take their toll on Sienna, who starts to blame herself for what transpired. Warren offers her some advice, and she refuses to be pushed aside. Damon verbally attacks her again, but Sienna’s having none of it, as she takes charge and locks herself in the venue.

22. Sienna is tasked with watching over DeMarcus in detention, where she receives a text from Summer, who wants to see her! DeMarcus, meanwhile, taunts Sienna, and an accident occurs. Sienna is worried about her future in the wake of the DeMarcus incident, especially with her teacher certification coming up. She has intentions to come clean – that is, until he talks to her and sympathises with her.

23. Cindy discovers Luke has gambled away all of his inheritance money. His risk pays off, and he sees it as a victory. Cindy, however, does not! Luke cannot understand why Cindy doesn’t react in the way he’d hoped, and therefore he heads off. While at The Dog, he bumps into Ollie’s girlfriend Evie. They talk to one another, and Luke leans in to kiss her!

24. Theresa puts out the feelers with Jack in relation to going on a date with Nana, and it appears he’s interested. Therefore she sets in motion a date. But there’s one teeny tiny problem. Jack thinks his date is with Theresa! Not Nana.

25. Nancy confiscates Charlie’s condoms to prevent him having underage sex, but when they fall out of her bag in front of Brooke and Scott, they make her realise the dangers of Charlie and Ella having sex without the right protection. Certain that they’re ready, Charlie and Ella decides to have underage sex and Nancy leaves them to it, knowing she has discussed things with them.