Phelan (Connor McIntyre) has been brought back to Weatherfield and held captive by Gary Windass, who’s taken the law into his own hands in his desperate quest for revenge.

In tonight’s visit to the cobbles, Phelan sees little Jack Webster as his best chance of escape following the schoolboy’s unexpected appearance at the builder’s yard.

Resorting to bribery, Phelan offers £10 to Jack in exchange for setting him free – and he’s delighted when Kevin’s impressionable son agrees to the deal. 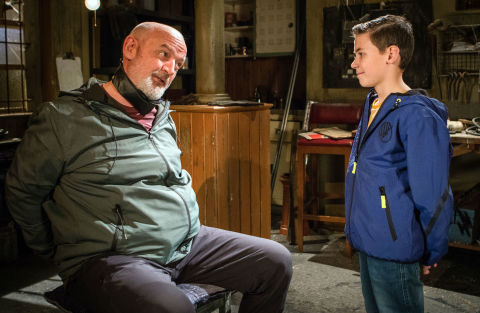 Gary (Mikey North) and his partner Sarah Platt (Tina O’Brien) are horrified when they return to the builder’s yard and find Jack hard at work as he tries to cut Phelan’s bonds.

Quickly taking control, Gary and Sarah offer Jack a bribe of their own and send him on his way again – ordering him not to tell anyone what he’s seen. 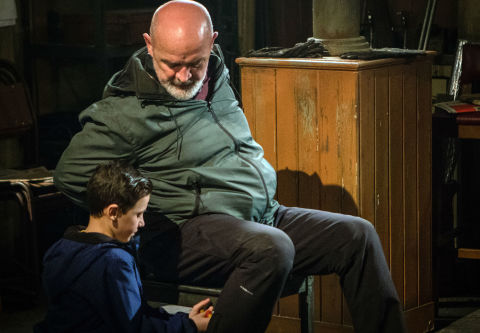 Later on, scheming Phelan plays mind games with Gary by making a number of insulting remarks about his mum Anna, wanting to wind him up.

Gary reaches breaking point and violently lashes out at Phelan, but the dangerous killer soon gets the upper hand by rearing up out of his chair and overpowering him.

Pulling out a gun, Phelan then turns nasty with Gary and Sarah, making it clear that he’s in charge now. But what does he want from them and how much danger are they in?

Digital Spy Soap Scoop video – hit play below for all the latest Coronation Street spoilers, as Alya discovers the truth about Aidan’s will, and Rosie says goodbye to the cobbles.