Q&A host Tony Jones must not listen to much hip hop.

The television journalist appeared not to notice when paralympian and Triple J broadcaster Dylan Alcott sat on the panel and played a light-hearted prank on the show Australians love to hate.

In fact, he managed to sneak in not one but eight references before Jones bid everyone good night.

The prank came about after Triple J host Brooke Boney dared Alcott to slip in some secret messages during his appearance on Q&A's disability special.

A listener put forward the idea of reciting Wu-Tang lyrics within his answers while on the panel, and Alcott took on the challenge – with enthusiasm, you might say.

The best bit is, no one else on the show appeared to notice.

"I took this Q&A seriously," Alcott told his listeners on Tuesday morning, after confessing his sins. "It was a serious [issue] that I'm really passionate about. But I thought, 'You know what? I want to take the Triple J listeners along for the ride with me and try to slip in some references'. 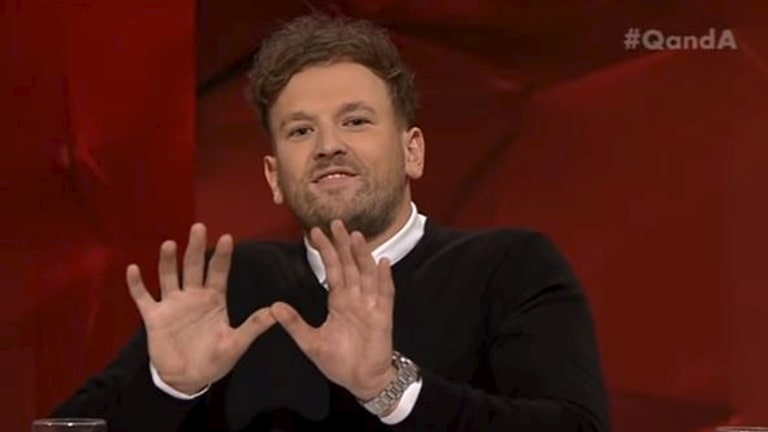 Dylan Alcott making the Wu-Tang Clan symbol at the end of Q&A on Monday night.

"I was crapping myself. I thought, 'What have you done?' I'm thinking, 'Can I get the Wu-Tang lyrics in?' Then you get taken out, there's 300 people in the crowd, maybe a million people watching on TV. I'm pretty shaky and all I was thinking about was trying to get these answers across because I was so passionate."

The lyrics Alcott weaved into his responses about disability issues and policy were adjusted slightly for ease, but the references were clear to any fans of the hip hop group.

"I was really embarrassed about the fact that I had a disability," Alcott said early in the episode, finishing off with Wu-Tang lyric, "It was rough and tough like leather."

Alcott saved the most obvious reference for the end of the episode, signing off by making the Wu-Tang symbol with his hands and waving to the studio audience.

Fairfax Media has been told Alcott let producers in on his secret after the show wrapped up, and there were no hard feelings – the Q&A team saw the lighter side of the story.