EastEnders airs devastating Carmel scenes as she battles her grief

Note: The following article contains discussion of suicide that some readers may find upsetting.

Tonight’s EastEnders saw poor Carmel Kazemi (Bonnie Langford) continue to struggle in the aftermath of her son Shakil (Shaheen Jafargholi)’s murder last week, which culminated in a heartbreaking scene as Carmel tried to end her own life.

Her family and friends had been growing increasingly concerned throughout the day as she rushed around the Square trying to find Shakil’s watch, which saw her cut her hand on some glass in the Vic. After visiting the mortuary, she was devastated when a doctor suggested that Shakil’s killer may have taken the watch.

When Carmel was taken home by her son Kush (Davood Ghadami) and ex-husband Umar (Selva Rasalingham), she told Umar that she wanted them to become closer, suggesting that this could be the one light to come out of Shakil’s tragic death.

But when he confessed that he and Kush may still be going to Dubai to set up a business together, Carmel was forced to face the possibility that she may lose another son.

She then hid in her bedroom and swallowed a number of pills, but when she found Shakil’s watch under her bed, she realised the reality of what she’d done.

Just as Kush arrived home, Carmel ran to the bathroom to make herself sick, leaving Kush to call an ambulance for her. 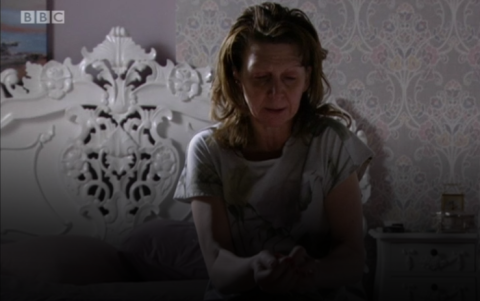 We would encourage anyone who identifies with the topics raised in this article to reach out. Organisations who can offer support include Samaritans on 116 123 (www.samaritans.org), and Mind on 0300 123 3393 (www.mind.org.uk). Readers in the US are encouraged to contact the National Suicide Prevention Lifeline on 1-800-273-8255 or visit the American Foundation for Suicide Prevention.

Digital Spy Soap Scoop video – hit play below for all the latest EastEnders spoilers, as Carmel struggles to cope with Shakil’s death and Hayley blackmails Kat.