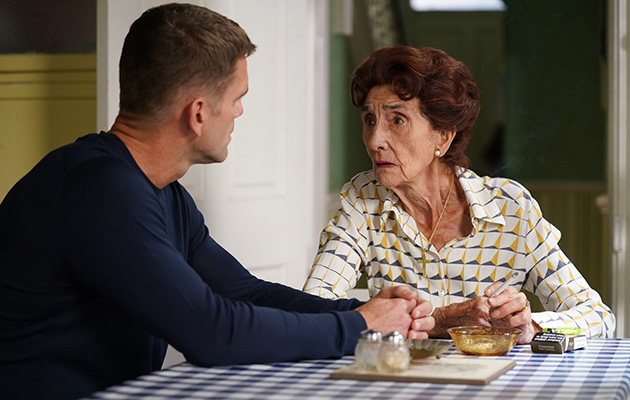 A statement announcing June’s death was released yesterday and read: ‘We are deeply saddened to announce that our beloved June Brown, OBE, MBE, sadly passed away last night.

‘There are not enough words to describe how much June was loved and adored by everyone at EastEnders, her loving warmth, wit and great humour will never be forgotten.

‘June created one of the most iconic characters in Dot Cotton, not just in soap but in British television, and having appeared in 2,884 episodes, June’s remarkable performances created some of EastEnders’ finest moments.’

‘Rest in peace, our dearest June. You will never be forgotten.’

June is most known for her role as Dot Cotton, a character she played on and off from 1985.

In 2007, June began working with Scott Maslen aka Jack Branning.

To pay tribute, Scott spoke to Gethin Jones and AJ Odudu on this morning’s episode of Morning Live, to discuss what it was like to work with the EastEnders icon.

‘She was such a powerful, intelligent, lovely individual. I think now, we just have to celebrate her life because what a life!’

‘June was the sort of person who would come over to you and help’, Scott added as he reflected on what it was like filming his first scenes for the BBC One soap.

‘She was always giving me information history of the show. If you ever wanted to find out anything about the show, go straight to June. I’m known as a bit of a clown, but June was very cheeky! She did the life; I was completely in love with her.

‘I am so happy I had 15 years of my life working with her, you can’t ask for a better teacher than June.’