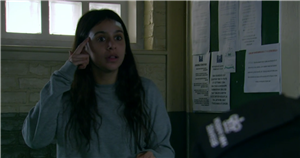 Emmerdale fans were left seething on Friday night after they noticed that Meena Jutla was still able to watch television behind prison bars.

After her dramatic appearance in court which saw her take the room hostage, Meena couldn't wait to watch herself on the news on her flat-screen TV back in the cell.

But fans were left surprised with the fact she was still given "tele rights" despite her abhorrent behaviour the day before.

Taking to Twitter in their droves, fans shared their thoughts.

One person wrote: "How the f**k has she got tele privileges."

Another astonished viewer wrote: "She’s only in prison & she already has tv rights that’s ridiculous you’re in prison u shouldn’t get no rights ffs."

A third commented: "How does she even have TV rights? She should be in solitary."

But as Friday's episode drew to a close, Meena unfortunately reached an unexpected stumbling block.

As she came back to her cell, Meena rushed over to her flat-screen TV to watch the news once again.

But she was left disappointed when she realised the electrical cord had been cut.

Fuming, the serial killer took her anger out on the new prison officer and demanded her to get deliver her a new television.

However, the stern-faced prison officer wasn't moved and told Meena she had "a lot to learn".

Jumping back on Twitter, fans shared their thoughts, with one person writing: "Meena wants to report someone for not having a TV. Manpreet was right Meena does hog the limelight."

Another penned: "I want a Meena spin off of her daily life in prison and to find out who killed off her TV!"

But others seemed to have had enough of the Meena storyline and begged producers to put it to bed.

One person moaned: "It's bad enough hearing the cast talk about loony tunes, but I really don't see why she has to still be on, surely anything regarding Meena can be done off screen now ffs."

While another echoed: "Now Meena is banged up can we make her a thing of the past I cba watching her mind games and bs anymore… 12 months of it is more then enough."