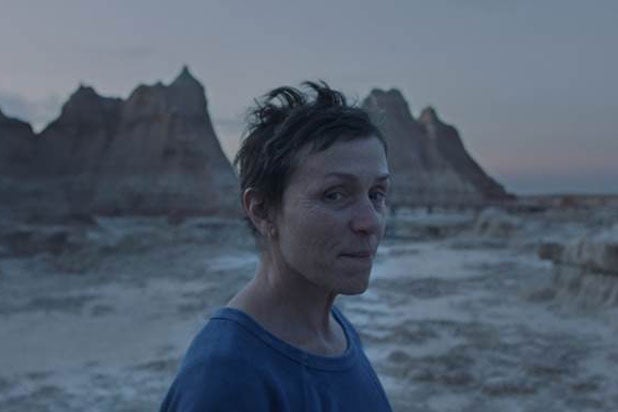 Chloé Zhao’s drama “Nomadland” will get a joint world premiere on September 11 via both the Venice and Toronto film festivals, with additional fall screenings from the Telluride and New York film festivals, Searchlight Pictures chairs Nancy Utley and Steve Gilula announced Monday.

While Telluride was canceled due to the coronavirus pandemic, executive director Julie Huntsinger plans to host a drive-in screening in Southern California later in the evening of Sept. 11, featuring in-person appearances by Zhao and star Frances McDormand. The film was also set as the centerpiece selection of the New York Film Festival.

The move is part of a “united platform” that the four major fall festivals announced earlier this month in response to the pandemic, vowing to move away from competing with each other for world premieres and specific films and to work together to keep the “film ecosystem” thriving.

Based on journalist Jessica Bruder’s 2017 nonfiction book “Nomadland: Surviving America in the Twenty-First Century,” the film follows Fern (McDormand), a woman who, after the economic collapse of a company town in rural Nevada, packs her van and sets off on the road exploring a life outside of conventional society as a modern-day nomad. The film features real nomads Linda May, Swankie, and Bob Wells as Fern’s mentors and comrades in her exploration through the vast landscape of the American West. David Strathairn also stars.

“The American road fascinates me.  It’s heartbreakingly beautiful and deeply complicated. I’ve traveled it for many years and always hoped to capture a glimpse of it,” Zhao said in a statement. “I’m thankful to be able to make ‘Nomadland’ and excited for audiences to join Fern on her adventure.”

“Nomadland” producers include McDormand, Zhao, Peter Spears (“Call Me by Your Name”), Mollye Asher (“The Rider”) and Dan Janvey (“Beasts of the Southern Wild”).

19 Coolest Ice Cream Scenes in Movies, From 'It's a Wonderful Life' to 'Wonder Woman' (Videos)

Over the years, Hollywood has licked up America’s favorite frozen treat