The long-ass wait for Game of Thrones‘ final season is bloody killing us.

Not only are we desperate to find out how things are going to unfold from here, but there’s also a big question mark hanging over the finale of season seven: did Beric Dondarrion and Tormund Giantsbane survive?

The two were atop The Wall when the Night King, his Ice Dragon, and his hordes of verbally-challenged flunkies turned up and wrecked the place more than a stag do at a Walkabout.

The episode leaves their fate ambiguous, but the script (which is now online after HBO submitted the episode to the Emmys for Outstanding Writing for a Drama Series) seems to heavily suggest they survive. 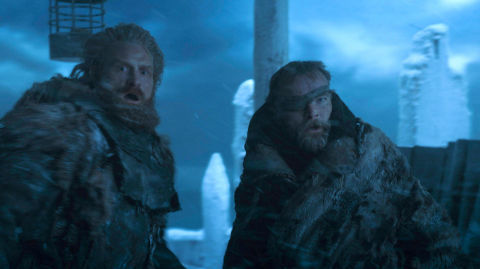 The extract in question reads: “Tormund and Beric lead their wildling comrades to the stairs carved in the ice — Eastwatch has a massive zig-zag stairway, not an elevator like Castle Black. They run for their lives and disappear from view.”

You’d think if they did die, the script would include it, so it looks like we’ll be seeing our favourite grumpy Wildling and the cool eyepatch dude (who could be quite important in the future) again.

One actor recently confirmed that they won’t be appearing in the final season, which is fine, because we can’t imagine they’d be very good in a fight against the undead anyway.

Game of Thrones season 8 will premiere in 2019. The show airs on HBO in the US and Sky Atlantic and NOW TV in the UK. Season 7 is now available to buy on DVD, Blu-ray or digital download.