To anyone who grew up with Sesame Street or The Muppets – basically anyone born from 1969 onwards – there’s something comforting about the sight of puppets on screen.

Maybe the world’s least bloodthirsty vampire would teach us how to count, or a biscuit-obsessed blue monster who had somehow dodged diabetes would snaffle some cookies, or two grumpy guys in the balcony seats would throw out sarcastic comments.

Whatever was happening, it was bound to be family friendly (although watching puppet domestic abuse as Miss Piggy landed a comedy karate chop on her frog partner was a little near the knuckle). New movie Happy Time Murders takes this safe, calm, gentle genre and dumps it in the gutter.

This isn’t the first time the warm and fuzzy world of puppets has been given the red-band treatment, and Happy Time Murders‘ “rotten cotton” aren’t the first to talk about – or have – sex.

South Park duo Trey Parker and Matt Stone made a rod for their own backs when they tried to capture every stunt in their live-action puppet movie on film. It only dawned on them how difficult it was to shoot an action epic using puppets once they started filming, comparing each shot to a “gigantic math problem”.

That didn’t stop their tiny stars getting down and dirty in a legendary sex scene. Shooting extra footage so the censors would have something to cut, this scene became even filthier when that additional material was added back in for the extended no-holds-barred DVD release. Prudes beware. 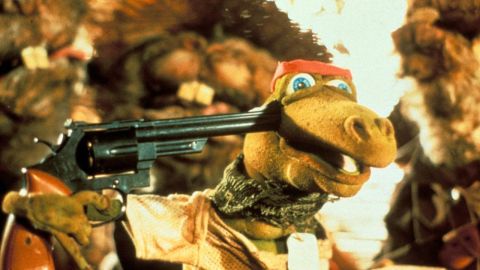 Peter Jackson may have joked that Meet the Feebles had been “wisely overlooked by the Academy” during his 2004 Oscar acceptance speech, but to his credit he had puppets behaving extremely badly long before Happy Time Murders was a piece of fluff in its creator’s eye.

“I was just about to pop my cookies!” shouts one character as a sex scene is interrupted. Stand down Cookie Monster, it’s not that kind of cookie. 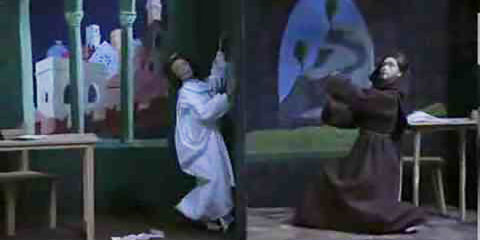 “Look, a puppet show!” says a young girl as she waits to cross the street with her father. Unfortunately, frustrated storyteller Craig Schwartz (John Cusack) doesn’t do child-friendly material, even as he’s forced to busk for small change. When his amorous figurines Abelard and Heloise start to grind against the wall that separates them as he tells their story of lust, the father of the girl who is watching gives him a knuckle sandwich. 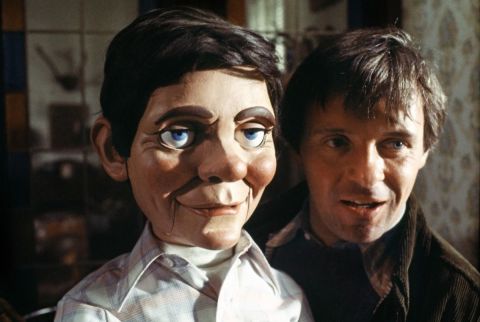 Creepy puppet Fats is so unsettling that the TV trailer for Magic was pulled from the airwaves after kids started having nightmares. Even though this was in the gentler times of the late 1970s, that’s good going.

If you ask us, we’re not sure who is worse: increasingly controlling puppet Fats or magician/ventriloquist Corky (Anthony Hopkins), whose mental health seems shaky at the best of times. 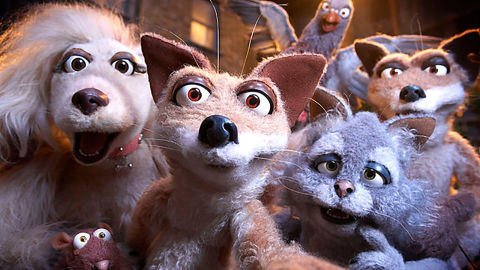 You shouldn’t normally judge a book by its cover but scaly, reptilian creatures the Skeksis were as vicious and ruthless as they looked. When these hate-filled beings weren’t using massive Garthim soldiers as stormtroopers to carry out their commands, they were stealing the life essence of lesser beings and drinking it themselves, the rotters. 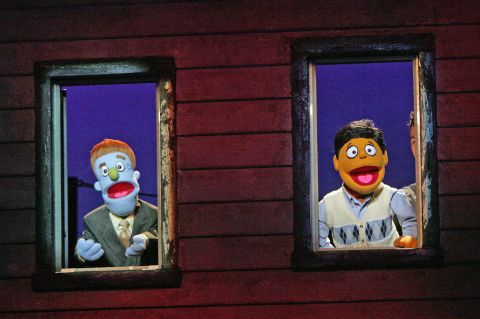 This theatre show used Muppet-like puppetry to bring some of its cast to life, but don’t expect to find Avenue Q in the same postcode as Sesame Street. Telling racy stories with adult themes, it’s not afraid to drop a sex scene that’d make the South Park boys blush. And while the creators claim there’s no connection to Sesame Street, roommates Rod and Nicky seem an awful lot like special friends Bert and Ernie. 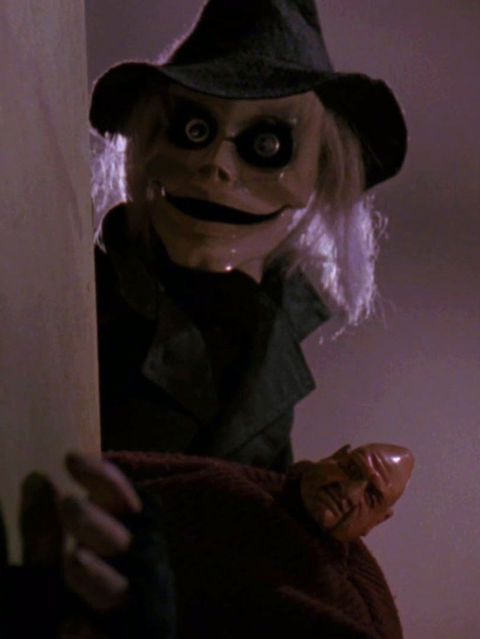 A childhood fantasy about a friendly puppeteer bringing joy to the children of smalltown America? Or the start of a franchise featuring a bunch of killer puppets animated by an Egyptian spell? We’ll give you one guess as to which of those is right, as puppets Leech Woman, Blade, Pinhead, Shredder Khan, Jester, Gengie and Tunneler set out on a murderous rampage. 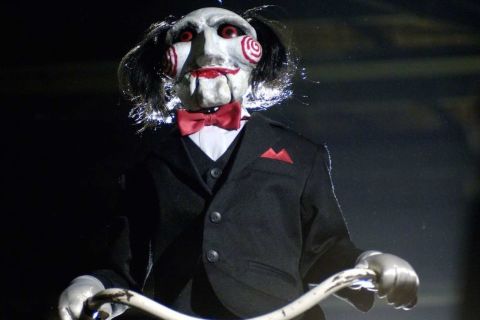 If you hadn’t already woken up wearing some excessive metal headgear or with a Pit and the Pendulum-style blade descending towards your torso, the next best way to know you were in one of Jigsaw’s games was when Billy the Puppet rocked up. This creepy B-movie wannabe often cycled around, though he thankfully spared us the additional horror of Lycra.

Do we want to play a game, Billy? Yes we do, and it’s Operation using your insides, taking you apart before you can set off the next trap and kill us all. 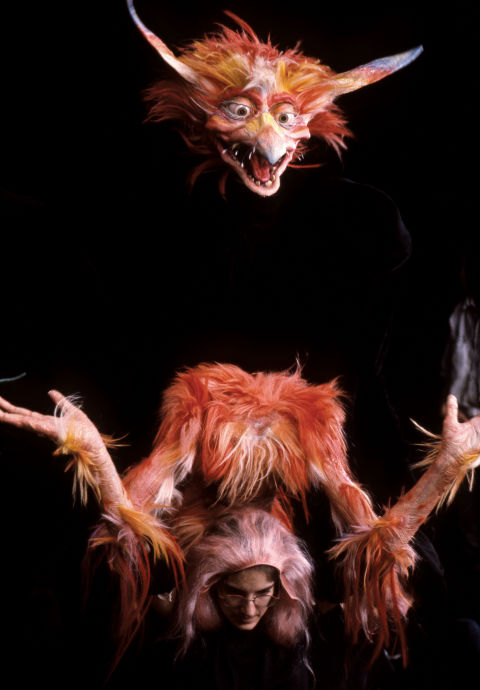 Creepy woodland creatures the Fireys seemed friendly enough at first sight but turned out to be scarier than the bulge in David Bowie’s tights.

Halfway through a cheerful song and dance they showed they were happy to rip off their own heads or roll their eyes like dice (“Snake eyes!”) as they terrorised our heroine. When they realised her head didn’t come off they were all up for a friendly bit of decapitation. Bad puppets! 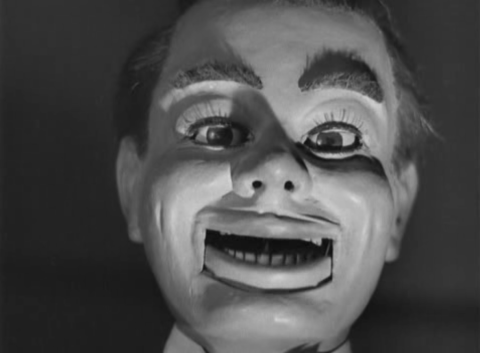 The final chapter of this celebrated Ealing horror anthology, titled The Ventriloquist’s Dummy, is its most chilling. Noted ventriloquist Maxwell Frere (Michael Redgrave) has a popular act with his cheeky sidekick, Hugo Fitch. The only problem is that Max believes his amoral dummy is alive.

When Hugo tries to give Max the slip and sign on with another performer, the ventriloquist goes gun-happy to protect their partnership. (See also Goosebumps’ riff on the evil dummy, Slappy.)