How Often Does ‘It’s Always Sunny in Philadelphia’ Reference Drugs and Alcohol? This In-Depth Study Found Out

“It’s Always Sunny in Philadelphia” takes place largely in Paddy’s Pub, an Irish bar located in South Philadelphia, so it shouldn’t be too surprising to hear the series’ characters consume or reference drugs and alcohol a lot. However, a new study from Alcohol.org puts the long-running FXX series’ love of substances into perspective.

The website, backed by American Addiction Centers, watched the 12 completed seasons of “It’s Always Sunny” and logged every time a character is seen with or talking about a substance. The results should prove surprising, even for diehard “Sunny” fans.

According to the survey, every main character – Dennis (Glenn Howerton), Deandra “Sweet Dee” Reynolds (Kaitlin Olson), Charlie Kelly (Charlie Day), Ronald “Mac” McDonald (Rob McElhenney), and, Frank Reynolds (Danny DeVito) – has consumed drugs or alcohol at least 140 times on the show across 134 episodes. Most characters have consumed way more, however, with Charlie out in first place having 324 mentions or visual depictions of alcohol or drugs. Charlie is followed by Dennis (251), Dee (249), Mac (217), and Frank (140), as seen in the chart below.

As far as mentions and visual depictions of substances per season, “It’s Always Sunny” Season 10 takes the honor. The tenth run of the series averaged just over 31 mentions and visual depictions of alcohol and drugs per episode, while Season 12 marked a new low for the series, with just 6.60 mentions/depictions per episode. Overall, the show averages at least one visual depiction or reference to alcohol or drugs each minute. The drink of choice is beer, which makes up 70% of the alcohol consumed on the show over 12 seasons.

“It’s Always Sunny” is currently airing its 13th season on FXX. Head over to Alcohol.org to see the full results of the entire study. 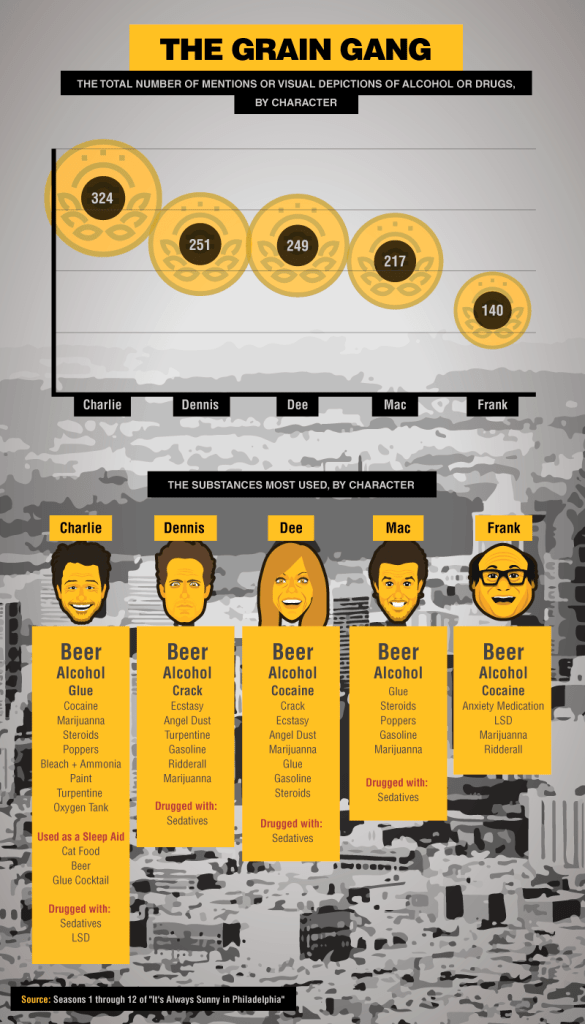