President Donald Trump and the Democratic candidate Joe Biden faced off against one another in the first Presidential debate yesterday. However, it’s fair to say the pair’s encounter left plenty to be desired among US voters and political commentators, with the debate being branded a “hot mess” and “car crash” for its explosive demeanour. Piers Morgan and Susanna Reid were keen to hear from former Democratic Party member Capri Cafaro and Former Deputy Assistant to the President of the United States, Dr Sebastian Gorka, to find out their thoughts.

However, just moments into quizzing Sebastian about President Trump’s demeanour and failure to condemn the supremacist group, The Proud Boys, the GMB conversation turned fiery.

During the presidential debate, Trump had said the phrase: “Proud Boys? Stand down and stanby.”

When Piers asked Sebastian directly if he himself condemned the group, Sebastian appeared to skirt away from Piers’ line of questioning.

Sebastian hit back that the group was first established “as a joke” and “wasn’t even a serious organisation.” 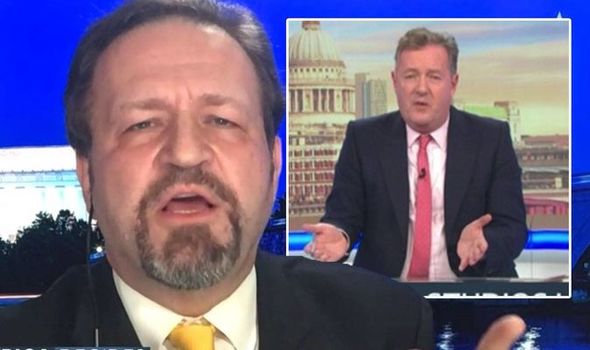 However, Piers was then forced to intervene as his two guests began to talk over one another.

“Hang on, this is not like last night’s debate, we run the show here,” Piers quipped as he tried to reinstate order.

The GMB host continued to quiz Sebastian as he added: “On that point, do you agree with that categorisation as to what The Proud Boys are?”

But Sebastian claimed he had “no idea” about the group today and has “no interest” in what they’ve become because they were supposedly established as a “prank”.

Sebastian then went on a full-blooded rant about US journalist Chris Wallace and his coverage of the debate, accusing him of lying about Trump’s response to the Charlottesville attacks.

So when Piers accused him of deflecting, Sebastian hit back: “No, no, I’m gonna finish this, Piers!”

Piers then jumped back in to accuse Sebastian of “distracting” from his original point, to which the former aide hit back: “I am not here to satisfy any test of yours,

“Are you gonna interrupt me or let me answer?” Sebastian added as Piers talked over him trying to secure a definitive answer.

Eventually, Sebastian did say: “I condemn all of it, but i’m not here to perform tests for you, Piers.” Faith column: ‘Let It Be’ a mantra for the ages